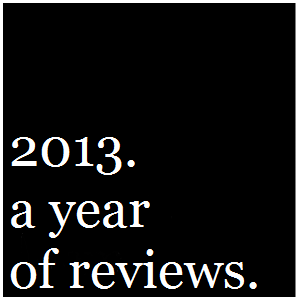 Lucky number 13. From Orlando, FL to Tampa to Athens, Georgia and Long Island New York. 2013 has been a great fucking year of live music.

Here are my highlights:

I got to see a grown man cry when a fantastic band from England – A Silent Film – showed us that bands still care a shit-ton about their fans in January.

I was introduced to a badass band called Bad Rabbits in February.

In March one of my musical wet-dreams came true during the Revival Tour, I got really high on a pot brownie and saw Pinback for the first time, my head was exploded by Kishi Bashi, got drunk and lost shit on the way home from Tallhart, and I got to see New Politics embrace their motto of “fuck it.”

I got fucking blown away by Del The Funky Homosapien in April (that dude fucking rules) then nostalgically brought back to high school by Andrew McMahon.

In May I got drunk and passed out in the grass while watching Ted Nugent at Funshine Music Festival. I got to see The Weeks twice in two days! On my birthday, I almost missed Steve Martin due to bomb threats! And fell in love with Ritzy from The Joy Formidable.

June brought one of my favorite bands ever, The Airborne Toxic Event and I got weird with a homophobic bartender – still bummed Kodaline wasn’t there.

I was bent over and almost pissed myself at the BJ Barham show in July.

September was filled with Vegan Dogs and the incredible UK band The Vaccines.

I got to see the all-mighty WATSKY in Athens, Georgia, cut the shit out of my thumb, and was part of a lingerie experience, almost died after the Saves The Day show, and saw weird shit and an English man in The Cold Start half naked in October.

November was filled with urine and vomit. I almost lost a good friend to death in November after having my fucking face melted off by Glassjaw and I woke up to piss in my house before Coastline Music Festival earlier in the month.

Finally, in December, I learned one of the most important life lessons there is with Tegan and Sara, and I got defeated by Jimmy Eat World but told defeat to ‘fuck off’ made the best of it.

I started this shitty blog in March of 2013. I’ve met a lot of cool people since I started writing. I am fortunate enough to be able to provide music lovers with free concert tickets to some of the shows they love.

If you see me out and you recognize me, come over and talk to me; have a beer. I’d be happy to thank you for reading and sharing a common interest in live music. I might even kiss you on the mouth.

2014 is off to a great start with a ton of free ticket giveaways in January. Sign up for the mailing list below to get first picks on free tickets.