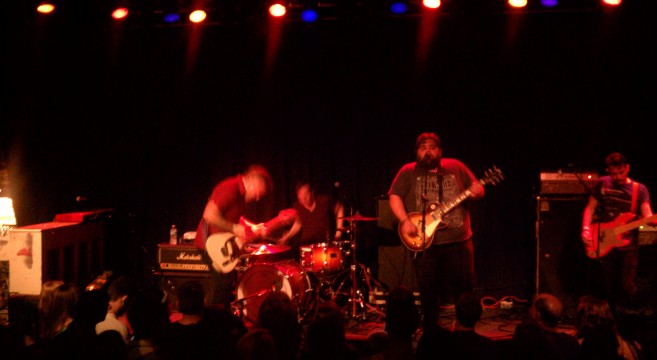 “How come everytime I try to get my shit together, I end up having less than I did before?” -Tallhart.

I got there as they were setting up. I grabbed a PBR from the cute tattooed bartender, turned around, and they were on.

I’ve tried to see Tallhart three times now and they keep going on right before I arrive at the venue. I should stop being late for shit. I’ve been kicking myself ever since they started their first song last night. I regret not seeing them all of the other times I had a paying chance to.

The lead singer, Matt, was wearing a Hot Water Music shirt which I thought was kick ass. Here’s a shitty pic: Matt is a big dude. He has an even bigger voice! Not only does he have an amazing range but that dude has some serious passion. It translates from his gut through his lips and out of the speakers. He makes my ears smile.

They played some new material off of their forthcoming Album due out in May 2013. I loved the lyrics to one of the songs. All I could remember is “Wish I could tell you I stopped drinking” and “Should have married my Ramona…” After that, they came back hard with their most popular song, Drunk Kids. It’s such a fun song. It’s about drunk people. Check out the Tallhart Drunk Kids Video here:

I caught up with one of my old friends at the show that I haven’t seen in years. I love it when you randomly bump into old friends that you’ve forgotten about. Turns out he’s a pretty well established photographer and still a cool guy. Check out some of his shit: www.photosbychrismartin.com

I had some friends that met me at the show on purpose. They arrived about 30 mins before I did and were able to catch the second band that played: From Indian Lakes.

They were both emphasizing how much I missed out on that great band. (Another reason I should stop being late for shit.) One of them like the band so much that she bought a shirt from the band. I checked them out. They have some pretty badass songs. Watch the From Indian Lakes – Breaking my Bones Video:

Lydia came out and I thought girls were going to start throwing bras onstage. The under (drinking) age presence was heavy. Lots of black Xs on hands. The band started and I found myself getting into it pretty easily. I checked out some of their music previously on Spotify so I kinda knew what I was getting into. They didn’t disappoint. The show was pretty closed to being sold out so you know they’re doing something right. Here’s a shitty pic of them: The have some cool songs. One of my favorite is The Exit. Check out the beautiful Lydia – The Exit Video & keep up with them on the Lydia Band Facebook Page.

I wanted to grab some merch from Tallhart before the crowd rushed the merch booth so I found myself over there during the middle of the Lydia set. I ended up talking to the Tallhart bass player, Glenn, for a while about other bands and nerdy musician shit. He’s a really cool dude. We have similar musical tastes. I bought some awesome merch: A Tallhart t-shirt, a 7” Vinyl, and their newest record Bloodlines (which was produced by Max Bemis from Say Anything). The vinyl has an awesome Peter Gabriel cover on it! Check out the awesome acoustic version of I Grieve by Tallhart.

After the show I got drunk. I ended up at a cool Burger Bar called “Beth’s Burger Bar.” I got a single cheeseburger with jalapenos and a side of fries to-go and walked home, happy as a clam. The burger was fucking amazing (not only because I was drunk). The sad part is that somewhere along my drunken walk home, I managed to lose my Tallhart shirt that I had around my neck. I was pretty bummed about that.