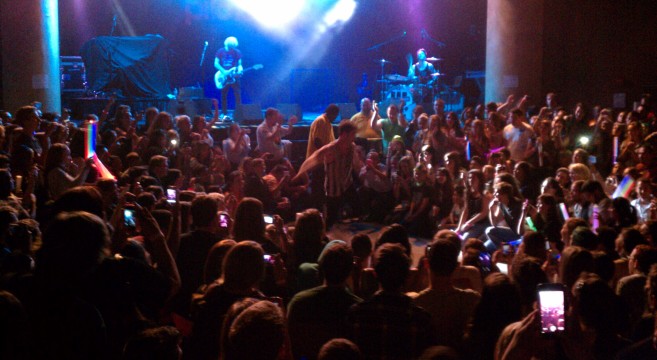 It takes a lot of balls to pick up your shit, leave your home country, and follow your dreams. New Politics are a three piece band that relocated from Copenhagen, Denmark to Brooklyn, NY in late 2009. From the lips of their lead singer at the show last night: “being here, playing for you, is exactly what we it means to us when we say livin the dream.”

The drummer of New Politics must break a lot of cymbals. He beats the shit out of his drums! It’s hard for bands today to stick out and be unique and get noticed. One of the best ways a band can do that is with their live show. This band gets it! The lead singer fucking breakdances, does headstands, flips, and pop-n-lock dances! I mean c’mon, what kind of rock band has a singer like that!?

They knew exactly how to engage the crowd to get them to fully participate in a fun and energetic way. Most everyone there was able to connect with them and understood their passion at some deeper level. I did. They conveyed how much it meant to them that the crowd was engaged and singing along even if they didn’t know the words to all the songs. They said, “I know nothing is perfect, but this is as close to fucking perfect as there is!”

Halfway through their set, the lead singer told everyone he was coming down to hang out with them. I assumed he was just going to sing a song in the crowd like a lot of bands do. I was way wrong. He got the crowd to open a circle in the pit and told everyone around the circle to kneel down. He walks to the edge of the stage and backflips into the open circle. He erupts into a full-on solo breakdance showcase! The crowd was drooling. How many of those people have been to a show where someone did something as awesome as that shit!?! Not a single one of them. Here’s a shitty pic: 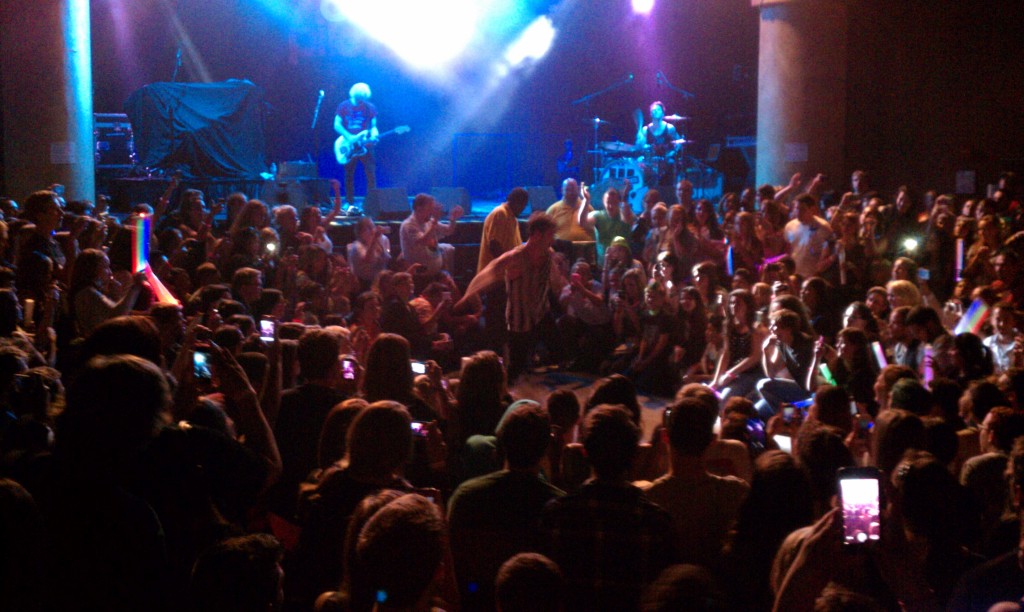 They closed their set with their two most popular songs: Harlem & Yeah Yeah Yeah. I first heard about this band on XM Radio – Alt Nation with the song Yeah Yeah Yeah. It’s a high energy song with an almost Nirvana-ish intro. It makes me play air drums for sure. Check out the New Politics – Yeah Yeah Yeah Video:

Rumor has it this band has over 300 songs written. So I don’t think they’ll be departing our eardrums anytime soon. Keep up to date with this band on the New Politics Facebook.

I am a little bummed I missed the first band that went on – Five Knives. I overheard multiple people saying they were “really good.” The sound guy at The Beacham told me they were awesome and he had fun mixing them. I always love female vocalists. Check them out: Five Knives Facebook.

The show was put on by MTV as part of their “Artist to Watch” concert series. In effort to make the show more memorable and fun, a good amount of the crowd were fitted with oversized glow sticks or glow batons… Good job MTV 😉 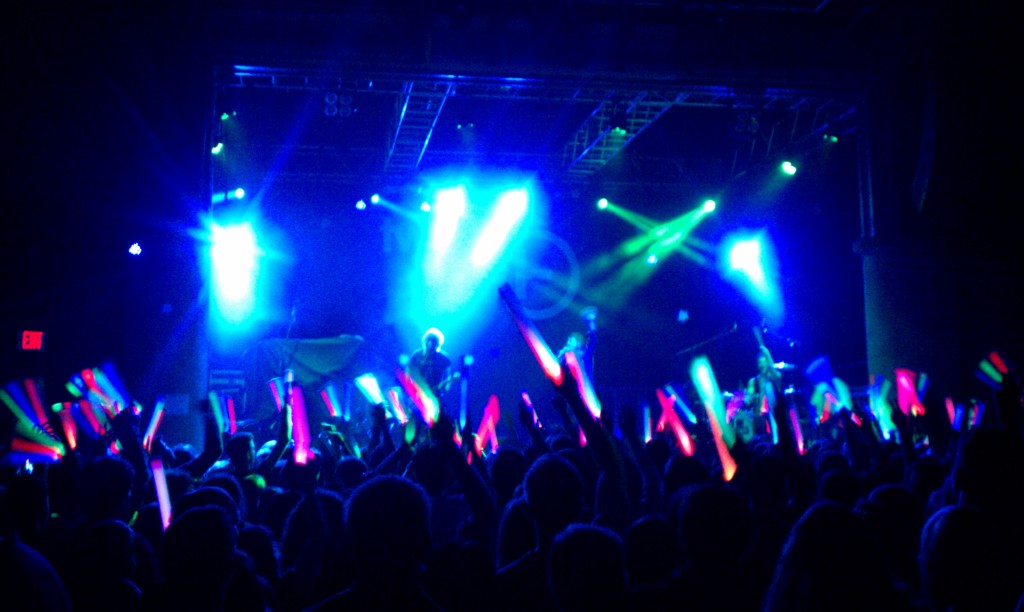 Twenty One Pilots or (twenty | one | pilots) is clearly into theatrics. They came out wearing full body skeleton suits to open their set with their song Ode to Sleep. It looked pretty fucking cool.

There is just two of them — a drummer, and lead singer who also plays piano, keytar (yeah, seriously), synthesizer, ukulele (seriously again), and wailed on floor tom at one point. The crowd loved them! It is fascinating when bands are able to connect with fans enough to have them shout their lyrics back at them.

The venue only a little over halfway full which was still pretty good for a new band in a mid-sized venue on a Wednesday night. They definitely would have sold out The Social next door which holds about 400 people.

TOP released their debut album, Vessel, on Fueled By Ramen early 2013. One of my favorite songs from the album is Holding On To You with lyrics like “Is it time to move our feet to an introspective beat? It ain’t the speakers that bump hearts, it’s our hearts that make the beat.” The song has an indie hip-hop feel. I like the contrast of rap style singing through the verses and the catchy pop-like vocal melodies through the chorus. Check out the Holding On To You Video:

MTV is 100% right with this band – they are indeed an “Artist to Watch.” I’m interested to see where this band goes and how they evolve. There are a lot of possibilities for a band like this. Keep up to them on the twenty | one | pilots Facebook.

Twenty One Pilots 2013 Review by Mitch.