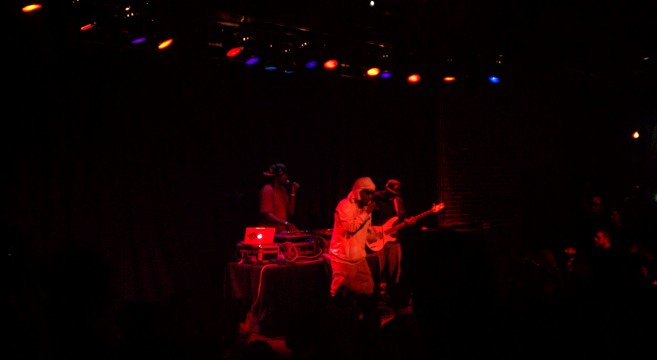 Del is a badass.
He is a world renowned producer and MC.
He sang on the Gorillaz song Clint Eastwood.
He has a clothing company called DelHIERO.
He has a beer named after one of his songs: Dogfish Head – Positive Contact.

This dude blew me away.

Del is probably best known for his parts on the Gorillaz self titled album. Most notably his part in Clint Eastwood. I fucking love that song. I’m also a huge Blur fan. If you don’t know what I’m talking about, you’ve probably been living under a stupid rock for the last decade. Gorillaz is a project created by the lead singer of Blur, Damon Albarn, and features Del on a few songs. Watch the Gorillaz – Clint Eastwood Video below:

I love how well he enunciates each lyric of his songs. So many singers, rappers, and lyricists in all different genres don’t put a focus on enunciating their speech so it’s clear and understandable. Del has this shit on lock down. You’ll never think “I can’t understand what the fuck he’s saying”… unless you don’t speak English. I love it!

I almost forgot that a thing called “underground hip hop” even existed.

Del seems like he’s one of the best kept “secrets” in the underground hip-hop world. The show at the Social wasn’t 100% sold out (it was about 90%). This show should have been sold out. It should have been 100% sold out at the Beacham next door (1200 people), not the Social (400 people). I feel very lucky to have experienced such an incredible performer at such an intimate venue. It was a somewhat emotional night for a lot of us. Especially being the last night of his US tour. Here’s a shitty pic: I remember playing Tony Hawk’s pro skater 3 on my PS2 and listening to this shit: Del The Funky Homosapien – If You Must Video

He shared the stage with a couple cool people. The only ones I managed to catch were these two: Check out the Bukue One Facebook. And a cool female MC that’s been around since the early 90s – Ladybug Mecca. Here’s a shitty pic of Del & Lady Mecca: There was also an after party put on by a local Graffiti & Glass Supply shop that I missed out on since it was super late and I had um… commitments. Be sure to check out:  http://www.bodhiblessings.com/ or http://www.facebook.com/BodhiBlessings

Dogfish Head brewery even has a beer named after one of his songs! As part of the “Musician Series.” Dogfish Head – Positive Contact. From his Deltron 3030 days with Dan the Automator and Kid Koala. Check it: Last but not least, keep up with him on the Del The Funky Homosapien Facebook.

Time to get weird and experience the ‘Del Trifecta’:
1. Drink his beer.
2. Listen to his music.
3. Wear his threads.
Go. Do. Enjoy yourself.