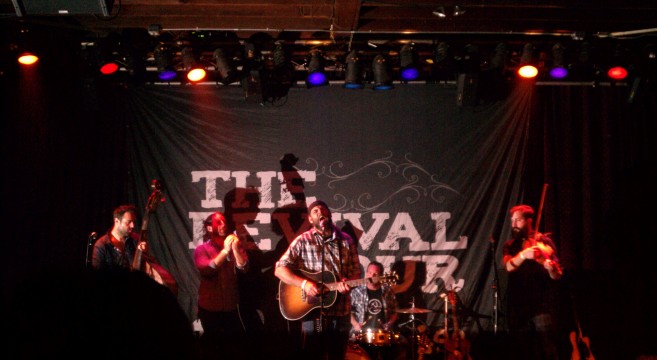 Imagine the lead singers of your favorite bands. Imagine them playing music together on the same stage. They all help each other sing your favorite songs. There’s a badass folk band there to back them up. The drink in your hand’s pointed high to the sky.

That was The Revival Tour.

This was my second year attending The Revival Tour at The Social Orlando. I made sure I arrived to this show on time. I knew what to expect.

They don’t fuck around when it comes to opening the show. The lights went down, the drinks went up… A unique experience nightly. This was our night.

Every player made their way to the stage. They each picked up an instrument. They all began. Together.

Breaking into a song from each player on the bill. Maybe a cover or two. Hearing everyone sing along to a Rocky V song then a Get Up Kids song and a Ragan song was quite incredible. The seed had sprouted on a fun night for sure. Chuck Ragan introduced each person on stage throughout the introduction set. Everyone was in this together. They weren’t fucking around. Here are a couple shitty pics: Once they played through the intro set and thanked everyone for being there, they switch to “solo” sets. A 20-30 minute set focused on that players music.

During this time, shit gets crazy.

The player could be singing one of your favorite songs solo with an acoustic guitar, or with a slew of friends they called to the stage. You don’t know who you’ll see. Any of them could come on stage to join in on a song. It could be a single player. It could be many player. Guitar, drums, mandolin, stand up bass, or singing their heart out while smashing a tambourine on their thigh.

Jenny Owen Youngs was introduced as the first “solo” set. She was quick to invite Rocky Votolato back on stage to sing a few with her. She also had Joe Ginsberg join her for a one on stand up bass and another on mandolin. She has an incredible voice and rocks her acoustic guitar. She’s also easy on the eyes. Needless to say, I really enjoyed her set. I’ve been listening to her albums on Spotify ever since the show. My friend and I checked out her merch and he bought one of her shirts. Both of us loved her shit.

We realized we both made the mistake of not checking her music out prior to the show. This was a mistake indeed. If you’re going to the Revival Tour, don’t make this same mistake. At the very least, check out the Jenny Owen Youngs – Pirates Video below:

Rocky Votolato is my favorite singer/songwriter. The first time I saw him was at the Social in 2006. Since then, I’ve seen him 6 times (that I can remember) at various venues and even different cities.

Rocky started out playing guitar and singing for a great band called Waxing from Seattle. If you’ve never listened to Waxwing, please watch the Waxwing – All my Profits Video below and check them out on Spotify.

HOLY SHIT WAXWING IS REUNITING! – As of April 2, 2013. Check out the Waxwing Facebook for updates.

I’ve met Rocky several times. He is one of the most kind hearted people I’ve ever met. His music can be raw, beautiful, captivating, and above all, is well written. His lyrics are honest, intriguing, and passionate.

I can tell every note he strums on his guitar and every breath breathed into his harmonica means everything to him for that moment. Watching him perform is truly a pleasure.

Rocky’s latest album, Television of Saints, was self-released through a successfully funded Kickstarter campaign. Check out the Rocky Votolato Kickstarter Campaign. (I got a couple signed, handwritten lyric sheets from it 😉 )

Rocky & The Revival Tour made it to Europe in Fall of 2012. Here’s an awesome video from a Germany show: Rocky Votolato – Portland Is Leaving Video:

I fucking love the Get Up Kids. I’ve been a fan for years. The last time I saw them was at The Social and they all went to ibar after and got drunk. It was great. Matt Pryor is the lead singer of the Get Up Kids.

Matt Pryor has several music projects from the past and present: The Get Up Kids, Terrible Twos, New Amsterdams, Reggie & The Full Effect, Lasorda, and 3 Solo Records so far. He’s a busy fucking guy. Additionally, you can commission him to write a song on: http://www.downwrite.com/

Matt played a mix of songs from his solo records and The Get Up Kids. It was really cool hearing some of those GUK songs done acoustic. Maybe he should release something like the Saves The Day – Bug Sessions EPs.

I got to watch Matt Pryor sing GUK – I’ll Catch You with my favorite singer/songwriter, Rocky Votolato. Have you ever heard that shit!? Yes, it was like a wet dream coming true. A musical wet dream… Check out The Get Up Kids – I’ll Catch You Video:

Here’s a shitty pic of them together playing that song: Chuck Ragan is a passionate human being. He is an honest, hard-working musician who is highly respected. Gainesville, FL is his home town. I grew up a few miles south in Ocala, FL where his band, Hot Water Music, was a ubiquitous name in music. He’s been playing in Hot Water since 1993. (I could go on and on with a list of Hot Water songs that are fucking awesome but I let’s focus on his solo stuff.)

He’s released a few solo records now. All worth a good listen. His album Feast or Famine starts out with a hell of a song called The Boat. This is definitely worth a listen. Check out the Chuck Ragan – The Boat Video:

During Chuck’s set, like all the other set’s, he invited various players to the stage to sing along with him. I said earlier, every show is unique. But this one surprised the shit out of me! Halfway through his set, he invite a very special guest to the stage.

One of my friends, and an Orlando local: Bartender Brian. Chuck had approached him before his set and asked “hey man, do you want to play a song?” His response was something similar to “Fuck yes. I do.”

Bartender Brian‘s a hell of a musician. He also bartends at the best Irish Bar in town – Lizzy McCormack’s across the street from the Social (hense the name). I’ve seen him open for some awesome bands in the past! Lucero, American Aquarium, to name a couple… Brian was kind enough to allow me to offer the studio version of this song for Free Download! Listen to Bartender Brian – Only A Dream below and download that shit. It’s FREE!

Chuck invited him out to The Revival Tour in Jacksonville the next night. Here’s a video from that show. Bartender Brian – Only A Dream Video:

Keep up with him on the Bartender Brian Facebook.

Like the beginning of the show, all players come back on stage to play a closing set. This is my favorite part of the Revival Tour. Seeing everyone on stage singing and playing songs from each artist on the tour is powerful. The whole gang onstage singing The Get Up Kids – Action and Action was the highlight of my night!

After the show most everyone stuck around. I got Matt Pryor to sign my Lasorda vinyl sleeve (see below). I talked to Rocky Votolato and thanked him and he remembered me 🙂 My friend and I thanked Jenny Owen Youngs and told her how happy we were that we discovered her. She was very cool, appreciative, and humbled.

Once I left The Social, I went to Lizzy McCormack’s. I met up with Bartender Brian who was with Joe Ginsberg. We all had a nice shot of Jameson (or 5). And I guess I had one too many cause I managed to lose my Lasorda vinyl after my whiskeys. I was thinking about making “lost vinyl” flyers with the above picture. If you have seen this and/or know of it’s whereabouts, please contact showsigoto@gmail.com !

I am inspired by this “missing bicycle” flyer: