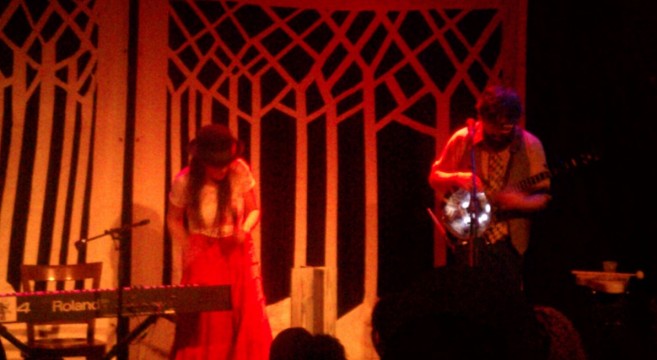 If I was on drugs at this show, my head would have exploded! Kishi Bashi got me high, legally. This amazing musician put on a breathtaking performance that was almost trippy at times.

I love riding my skateboard. It was a beautiful night to ride my skateboard. So I rode it to the show. It’s a cool longboard with carpet instead of griptape. Yeah, it’s badass. This is it: Gold Coast Heavy Pile Longboard.

With the help of my skateboard, I got there early enough to catch the second half of the opening band – Elizabeth & The Catapult. She had such a beautiful voice and was great on her guitar and amazing on her piano. For a few of her songs, she was joined by an badass banjo player that goes by the name Tall Tall Trees. That dude had a sweet beard and a light up banjo! I was sold. Here’s a shitty pic: Elizabeth and Tall Tall Trees are both from Brooklyn. I’m not sure if they play together regularly, but they should. One of my favorite songs Elizabeth performs is “Thank you for nothing.”

Did I mention she went to Berklee School of Music!? Dude. She fucking rocks! Keep up with these great artists here: Elizabeth & the Catapult Facebook and Tall Tall Trees Facebook.

Kishi Bashi thinks about music differently than most people. There is no “box” in his world. He is an amazing violinist, he beatboxes, he sings beautifully, and he is a wizard with his elaborate pedal board. He created multi-layered songs piece by piece by looping his voice and a violin. It was incredibly fascinating to watch. During several of his songs, he was joined by Tall Tall Trees on the “space banjo” and Elizabeth & The Catapult on keyboard and drums.

You may recognize him from fronting his band Jupiter One or as a touring violinist along side Of Montreal or Regina Spektor. His solo career is taking off. He has had some of his solo music featured in a range of commercials from Microsoft to Sony to Smart Cars. Most recently he wrote a short chorus for a Japanese Smartphone Company. Check it out – Kishi Bashi Japanese TV Commercial.

This song has been getting so popular in Japan that he was encouraged to write a full version of the song, entitled: “Philosophize in it! Chemicalize with it!” which he performed for the Orlando crowd. He also said it is trending on Japanese Radio Stations.

I could tell Kishi absolutely loves what he does. He takes a lot of pride in it. He is a perfectionist. Above all, he seemed like he was having a genuinely great time. I know I was! One of my favorite songs he plays if called Confessions at the end of the world. “It’s a song about regret,” he said. Here’s the best live video I could find:

Kishi stayed after his performance, talking pictures and signing autographs. He was very thankful to everyone for their support, again, it seemed truly genuine. I managed to get my three 7” vinyls signed before the security guard kicked me and the rest of the fans waiting out. Even his vinyl’s are impressive! Check this out: If you ever have a chance to see Kishi Bashi live, DO IT!! If you take drugs, you might want to skip out on them that night, or just take a whole bunch of shit and black out… whatever. Keep up with him on the Kishi Bashi Facebook.