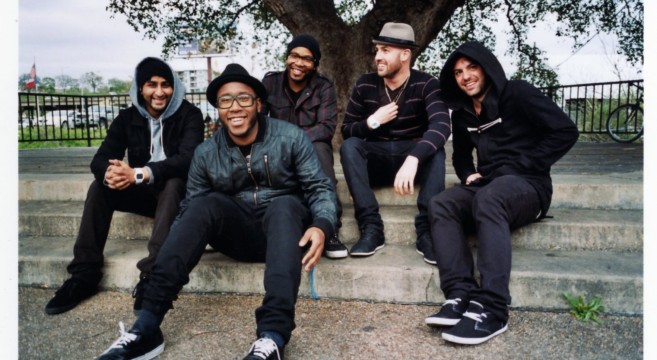 I took one listen to the song “we can roll” and I just knew this would be a fun show to attend. Holy Shit, I was right. I got there right before they went on, grabbed the cheapest beer I could find (PBR) from one of the awesome bartenders at the social and claimed a perfect spot in front of the bar facing the middle of the stage. The place was about ¾ sold out, perfect in my opinion… Not overly crowded – people could easily walk by you without leaving a bit of their sweat behind. But crowded enough to create a room full of energy.

The band took the stage about 10:30 and opened with their hit. A wise decision and here’s why: The song begins with a hypnotic intro of high pitched vocals and guitars while the drummer builds up on the bass drum and cymbals. This is all to be dissolved with a lingering 8 count pause then BOOM! “We can roll!” The room exploded! As a smile grew across my face, I watched the rest of the room and even the staff respond positively with their hands in the air and their heads bobbing to the beat. I was truly feeling the tremendous energy this band was creating. Throughout their whole set, the band was fairly energetic and the people in the pit were fully engaged.

Their rhythm section (drums and bass) was awesome! Their drummer was wearing a Glassjaw jacket which I thought was rad. I could definitely see a little Gj influence bleed through in a couple songs during their set. The lead singer was great at getting the crowd engaged, you could tell he loved what he does. Towards the end of the set the he gave a shout out to the guitarist of A Day To Remember, Kevin, who was in attendance. Not sure if they’re just tour buds or if he was more involved than that but it was worth a mention.

When I went to look at their merch, I was a little bummed they didn’t have vinyl. Hopefully they’ll have it by the next time they play here. I was impressed because all of the band members stayed after and showed their fans they care. They made sure their fans all had the opportunity to meet them and willingly signed anything requested.

Definitely a band to check out and I’m excited to see what they have in store for the future. The next day, they were “on a boat” for the 311 cruise for 4 days. Bands get to do cool shit. There’s some pics on their facebook here: Bad Rabbits Facebook.