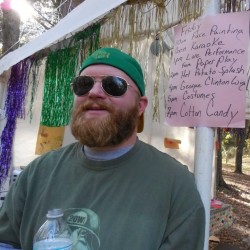 I’m a live music concert junkie, did I come to the right place? I’ve been hooked ever since I was 13 when I went to three life changing shows at the Lakeland Civic Center in 1997-98: No Doubt, Cake, & The Vandals; 311 & Goldfinger; and Korn, Incubus, & Hed PE.

I’m a Florida native, born and raised in Orlando. I spent my last two years of high school in Cocoa Beach, and graduated from Florida State University in Tallahassee (GO NOLES!) where I earned a Bachelor’s degree with a double major in Finance & Real Estate. Currently, I’m a commercial real estate appraiser by day, and a concert videographer / photographer / live music reviewer by night.

In 2009, I began filming bands under the moniker, “The Sober Goat” (don’t let the name fool ya). Since then, my passion has grown exponentially as has my love for the music. Now, I embrace my addiction to filming artists and bands. I love to capture their magically cohesive art, whether it’s a full set from the back of the house with my Canon Vixia camcorder on a tripod, or just a quick clip from the front of the rails with my phone.

I also like to make my own loud noises on my drums from time to time.

If you wish to contact me, email [email protected] or visit www.youtube.com/thesobergoat.

SHOWS TO GO TO

We sweat here. This is the best MMA Gym in Orlando!