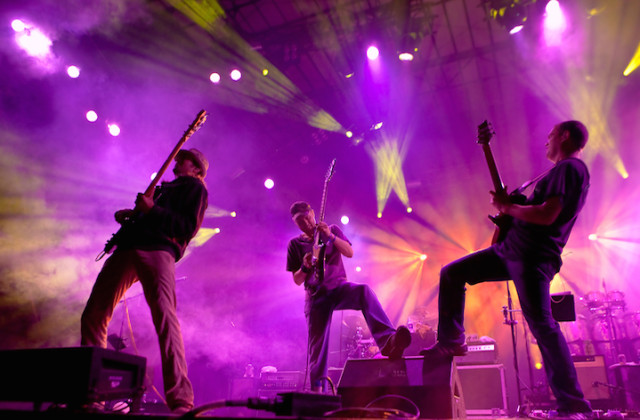 [Editor’s Note: This is another installment of a fun series we call “Two Views,” where we put out two different writers at a show to conduct completely independent live reviews. Then, we edit the two together as a conversational piece about the show. In this installment, Sean and Richie attend Umphrey’s McGee (Sean, two days, Richie all three FL dates).]

Sean: Every once in awhile, I happen upon a performance for which I reserve use of the word “legendary.” It’s somewhat rare anymore since I’ve become progressively jaded over years of going to shows, but I’m still fortunate to occasionally catch one that totally blows me away from start to finish. After seeing Umphrey’s McGee at House of Blues in Orlando on Friday, August 21st (the beginning to their FL run), I feel no hesitation in declaring this kind of milestone. This was a show I will be talking about for quite awhile.

If you’re not already familiar with Umphrey’s McGee (UM), it’s time to become acquainted. You may have to look passed the name (I actually thought they were a bluegrass band before I really knew about them). The name says almost nothing about them except that they’re humble and have a good sense of humor. This six piece (seven if you include their light designer) is easily one of the most technical rock bands of our time.

Richie: All hail the mighty Umph! Night 1 in Orlando was my 18th Umphrey’s show and had the best setlist of the three nights. Although the venue is not my favorite of places for a show, with the drive to Downtown Disney, dealing with tourists, traffic and ongoing construction, nothing could keep me away from this show, not even the 4-hour visit to the emergency room to take care of my girlfriend’s sliced open thumb. Seriously, that happened, at 4 pm. We got to House of Blues just after Umph hit the stage and my girl rocked out with her thumb stitched and wrapped. Good times! I especially found it funny that the intro track was appropriately titled “Bathing Digits” reminding Michelle to keep her thumb clean. Of course, she had plenty of distractions from the jams and lights to distract her from the thumb pain. Sean: When you see UM, you get a full sensory experience that extends beyond the music and stage presence of the musicians themselves. I include the light designer, Jefferson Waful, as part of the band (as many fans do) because the lighting is a huge factor in the presentation of the live show. Every nuance of the lighting is given careful consideration and synced with the show on the fly, which requires a lot of familiarity with the complex rhythms and emotional feels of UM’s songs (check out this interview). Waful’s expert skill with state-of-the-art lighting technology and use of fog textures adds a whole extra dimension to the performance. To me, this represents the highest evolution of what a present-day live rock show has to offer in its purest form.

Another important part of the Umphrey’s experience is the incredibly friendly fanbase it attracts. There’s a real family feeling that follows their shows around the country. Maybe it’s because it attracts so many happy jam-scene festival heads, but I would also venture to say it’s the type of music UM plays. The lyrics are relatable; it’s apparent they come from the heart and speak volumes about the human condition. I think it’s naturally a magnet for genuine, fun-loving people, many of which are willing to travel great distances to lose themselves in a carefree environment that compels everyone to radiate their most honest, passionate energy.

Richie: My first two Umphrey’s shows were at Bonnaroo 2008 and 2010; however, both of those were afternoon sets in the hot Tennessee sun with the lack of a light show and me hungover laying on a blanket in the back of the crowd. 2010 was the year I really got into these guys, especially after my first real show experience in November at the Bear Creek Music & Art Festival at the lovely Suwannee Music Park in Live Oak, Florida. Umphrey’s played the first Bear Creek in 2007 and returned in 2012 and 2014. I’ve met lots friends during Umphrey’s shows who ended up being mutual friends of friends, reminding me how small the world really is. In fact, I was recognized by random people at each of the three nights on this run after mentioning I was YouTuber TheSoberGoat in response to questions raised from the cameras dangling around my neck.

Sean: What made UM’s Orlando show particularly monumental for me was getting to see some of their darker, heavier side. Most of the set list was made up of songs with more technical rhythmic changes and explosive builds than I recall seeing from past shows. I connected so intuitively to this show; it all resonated so perfectly through me. Much of the night, I couldn’t help but to righteously pump fisted horns into the air as I was enveloped in the powerful waves of sound and light.

Sean: The setlist included many of my favorites, namely “Hurt Bird Bath,” “Spires,” “JaJunk,” “Plunger,” and “Dump City.” We also got a badass cover of “Girlfriend is Better” by the Talking Heads and a very rarely performed (new?) song called “Draconian.” “Draconian” is a good word to describe the intensity of the set as a whole. It seemed to exhibit more metal elements than the show I saw in St. Pete a couple days later.

Sean: Richie was fortunate to catch the Miami show the following night as well, which he said was his favorite of UM’s three night run in Florida. Richie: Saturday night (August 22nd) was Round 2 of the trifecta weekend and my 19th Umphrey’s show.  The Fillmore Miami Beach at the Jackie Gleason Theater is such a beautiful venue, which is probably the reason I enjoyed the overall show experience so much. The Miami set was great and, typical to Miami Beach, it was filled with lots of beautiful people.

The first set started with the “You Got the Wrong Guy” intro segueing into an amazing “All in Time” which included a “Thunder Kiss ’65” (White Zombie) jam in the middle.  This was followed by a soothing version of “Piranhas” and a devilish “Go to Hell.”  Check out video of the “Thunder Kiss ’65” jam below!

Richie: The nice thing about summer Florida tours in August is sometimes you can enjoy the show inside a nice air-conditioned venue, which The Fillmore provided, unlike the following outside night at Jannus Live in St. Pete, albeit both are incredible experiences.  Anyways, this first set of the Miami show appropriately included the song “August.”  Next it was time for the night’s special guest, the one and only, the doctor himself, Mr. Roosevelt Collier of The Lee Boys on steel guitar.  Rosie tore it up on “Much Obliged” and stayed for another tune as the band went straight into “Glory,” an uplifting, feel-good piece of music (watch video below).  Roosevelt then waved goodbye to a roaring crowd, and Set One ended with a recent favorite of mine, “Rocker Part 2,” which you can also watch below.

Richie: After a much needed set break, the lights dimmed and a lot of people in the crowd began guessing what the first song of Set Two would be, which many correctly and appropriately guessed “Miami Virtue.” Next was the night’s cover song, Radiohead’s “National Anthem.”  The middle set included: a bouncy “Wappy Sprayberry,” “Mulche’s Odyssey,” “Dim Sum,” and a stellar “Similar Skin.”  Finishing off the second set was the ever-so-fancy “Nothing Too Fancy,” which featured Jake taking a break from his guitar to hop on the keys with Joel. The encore was “Booth Love.” The night ended and everyone was waiting for what would be in store for Sunday night at Jannus Live.  Watch a clip of “Nothing Too Fancy” below.

Richie: After the show, the party moved next door to the side room for Roosevelt Collier’s official after party featuring Joel Cummins from Umphrey’s. It was most good, and I wasn’t even planning on going. Two friends could not go and gave me their tickets!

Sean: The show at Jannus Live in St. Pete (August 23rd) was blazing in more than one sense. As Richie mentioned, it sure was hot outside, but UM shredded through it with unyielding energy nonetheless. I had actually never been to Jannus before, so it was a nice surprise to gain a completely different perspective in an outdoor environment. We managed to get front and center for the whole show, which made up for the heat. UM threw down two more phenomenal sets, but they were slightly more mellow this time around.

Richie: The Jannus show was my third time seeing Umphrey’s at the beautiful outdoor venue in a downtown courtyard. This was also show #20 for me and it was a fun one, besides being so hot and on a Sunday with mundane work responsibilities to handle the next day after a rocking weekend. The show was a fantastice tour closer that included my two personal favorites, “Bridgeless” and “1348.” The boys were also awesome enough to give us a rare “Cemetery Walk” into “Cemetery Walk II.” Sean: UM played a few more of my favorite songs at the St. Pete show, namely “1348,” “Divisions,” “Bridgeless,” “The Floor,” “Hajimemashite,” and “Educated Guess.” One of my absolute favorites, “No Diablo,” was part of a killer encore, finished out with a brilliant rendition of “Day Nurse.”

The fun didn’t stop there. Afterward, some friends and I went around the corner to a bar called Mandarin Hide and ordered some Umphrey’s McGee beer, a collaborative effort with Rock Brothers Brewing called Nothing Too Fancy. Delicious! We got some awesome koozies with it too. I love free stuff! 😉

After a couple rounds of brews, we walked to Ringside Cafe to check out the official after party with Displace and Voodoo Visionary. If you haven’t heard of either of those bands, I highly recommend looking them up. They really know how to jam! We danced for a good couple of hours and worked off those beers.

At one point, we took a break and went outside for some fresh air. We noticed what appeared to be Umph’s tour bus in the parking lot across the street. Sure enough, it was! Jake Cinninger, Brendan Bayliss, and company were just hanging out, so we took the opportunity to say hey and thank them for the great shows. They’re real down-to-earth guys. They love to play fun music and enjoy sharing their passion with everyone.

All in all, this whole experience made for a weekend I will never forget. I can’t wait for Umphrey’s McGee to tour Florida again! I am going to try to catch all the shows next time around, and I hope I can encourage everyone else I know to do the same. We can spread more of that sweet Umph Love and extend the family.

View The Sober Goat’s photos from all three nights here!

ORLANDO, HO– USE OF BLUES: