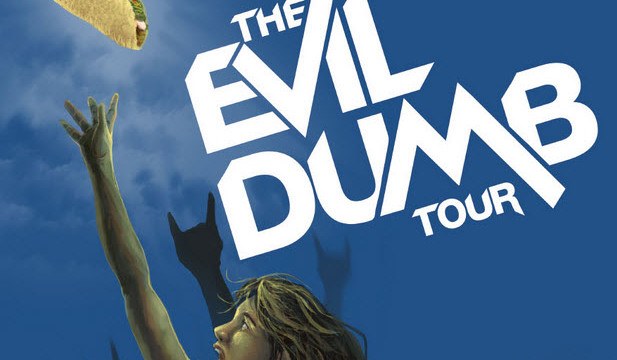 I like comedy and I like metal. I like jokes and a double bass pedal. I absolutely love comedy metal. When I first heard of Psychostick and their first hit single “Beer” back in 2007, I was an instant fan, much like when I first heard Green Jelly’s “Three Little Pigs” in the early 1990s.  I can remember first seeing Psychostick play at The Haven in Winter Park in 2009.  Now, flash forward to August 1, 2015 and “The Evil Dumb Tour” at West End Trading Co. in Sanford, Florida.

I was excited for this show because it had been about four years since I had seen Psychostick.  I was hoping to catch local comedy funk metal legends Gargamel! but unfortunately I was fashionably late and they were playing their last song as I stepped into the venue, just in time for Mandaddy (singer) to say “You were drunk, we were awesome,” as they walked off the stage.  There were also three other bands that had already played (Nation of Decay, Sugarless, and NoSelf).  The next band to play before Psychostick was Wolfborne, who recently formed in 2013 from Vancouver (in Canada, eh) and are alongside Psychostick on “The Evil Dumb Tour.”  I was expecting another comedy-ish band, but I quickly realized Wolfborne was not that, but they did thrash some shredding hard rock metal and have a complementing diversified singer to boot.

Next up was the main event on “The Evil Dumb Tour.”  The lights dimmed and various recordings of Bruce Campbell start playing, including quotes from the horror movie trilogy The Evil Dead and quotes from his fiction novel Making Love the Bruce Campbell Way, which should be noted contains no actual love advice.  So, the band comes out one by one, just after the quote “Once you’ve made love the Bruce Campbell way, you never go back.” plays on the speakers.  And the opening song was, surprise surprise, “Bruce Campbell” which is an homage to the actor and describes how the band would like to hang out with the finest man to grace the silver screen, whether he wants to hang out or not (very stalker-ish).  The next song was “ABCDeath” where they sing the ABC’s in classic punk rock death metal fashion with a zero to ten countdown and fans holding up their “zeros” before the countdown.  Squeezed in the middle of that short song was their adaptation of the theme song of classic TV show Reading Rainbow (“Read a fucking book”). 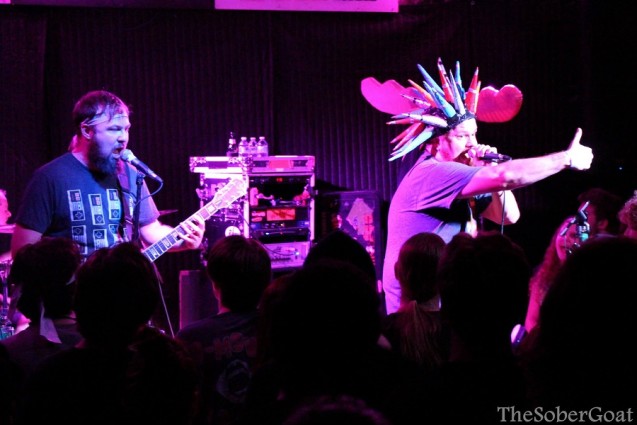 Rawrb (vocals) then says it was getting a little late: “It’s a little half past kick the tires and a quarter past light the fires,” and he could feel the need (for what?) the need for speed.  The speakers then boomed with a straight up fantastic hard rock cover of “Danger Zone” by Kenny Loggins, which the band appropriately enough dawned sunglasses as a nod to Tom Cruise in Top Gun.  Another cover followed, “Doom Song,” which is a tribute to the Nickelodeon cartoon theme song for Invader Zim.  I was not familiar with this cartoon and therefore didn’t fully understand the song, but still enjoyed it. That’s what the great about this band is, they’re technical musicians and talented artists who, even though the songs are silly in nature, sound very professional. After the song Matty said they were running out of Invader Zim t-shirts on this tour.

Next up was a grouping of songs … no not a medley, but a sandwich, which is not just a varied mixture of several songs combined into one, but the first featured song is also featured at the end… clever.  Of course, their song “Sandwich” was included (see Psychostick setlist at the bottom of this post. 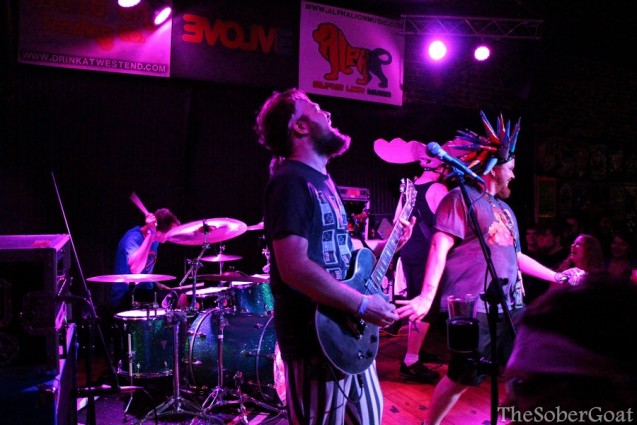 Next, the band took a short time-out for plugs and thanked all the other bands that played before them, and announced that Psychostick will return to Sanford in October.  Next on the setlist was “So. Heavy.” which pokes fun at their favorite genre which plays on low drop tuning, show-off playing styles, and incomprehensible lyrics of many typical heavy metal songs.  Following that was the official intermission “(fuck intermission)” which played the famous recording about proper usage of the F-word, followed by the band playing their song “NSFW” which includes only one word repeated several times and exclaimed in numerous ways.  The next song lightened things up a bit with “Dogs Like Socks” which I took to heart as I am constantly on sock watch at my home trying not leave them on the floor because my pit bull really, really likes my socks.  Seriously, I’ll lose a sock and then later that day (or the next day) my dog will puke it up.  Weird. 😮

The guys then brought up some fans on stage to sing “Happy Birthday,” which is the typical “Happy Birthday” song with loud noises and yelling at the “TO YOU” parts.  Matty told the birthday boys and girls, “Happy birthday now fuck off.” To which Rawrb said “No no no … stage dive, all four of you … I’m just kidding, you can safely exit the stage now.” 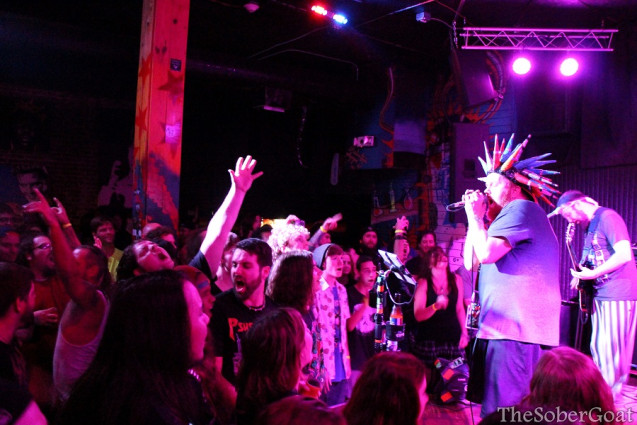 Psychostick showcased their brilliant parody of the 1976 classic rock song, “Magic Man” by Heart, while paying tribute to Josh’s favorite video game, Mega Man, which he attributes seeing his first sunrise to when he once stayed up all night playing the game as a kid.  After that video game thrashing, Matty asked a fan what his favorite animal was, and the fan correctly answered “Rhino,” which was a perfect segue into their song “President Rhino,” a somewhat political song.

Yes, Psychostick is allowed to get political and address important societal issues, even if it’s through a rhino.  The next two songs were perfect complements of each other: “Scrotal Torment,” which speaks to the severe suffering of having to endure and ultimately end that unpleasurable itching sensation in a man’s nether regions; and “Because Boobs” which needs no explaining.  I can remember seeing Psychostick in downtown Orlando in 2011 where they played “Because Boobs” three or four times because they were filming the music video for it (fun fact: that video also features strip club scenes which were filmed at the one and only Dancers Royale in Orlando). 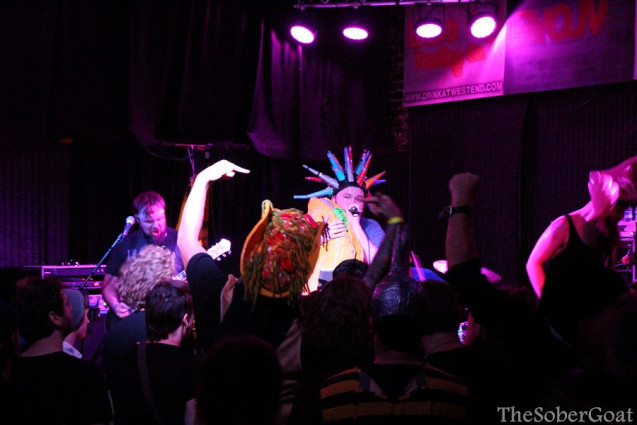 Finally, it was time to drink some BEER!  Ok, ok … time to drink some more beer.  Rawrb started the song by saying “Sing along, or you’re ugly.”  I think every single person in the room sang along and everyone was moving. Closing the show was their tribute to facial hair: Mustache?  No.  Sideburns?  Nope. Goatee?  Maybe.  Beard?  BEARD!!!  As a fellow beard man myself, “Obey The Beard” speaks to me. The set officially ended when the band told the crowd to “fucking dance.”  This is when Rawrb attempts to push play on his iPad and play an outro song of some sort, but it crashed. He tells the whole crowd to freeze and then tries again with much success, and the crowd starts dancing to a disco fun song titled “Cantana Band” which is a 1977 disco funk version of Star Wars music by the band Meco.

The band passed out tour posters and stuck around to meet and greet fans and sign autographs. I got my poster, got it signed, and got a picture with each stick.  There were even a few fans that dressed up for the show, most notably a guy in a hot dog costume with a taco hat who was in the middle of the pit most of the show. Crazy awesome good times. 😎 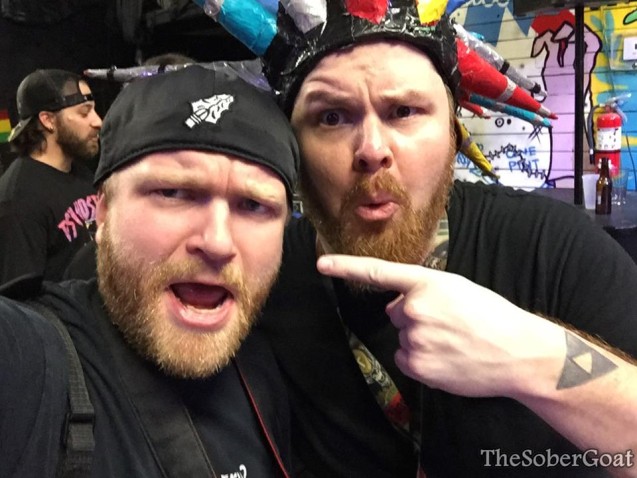 Check Out Live Photos from The Show Here!

Check out video of the whole show – Psychostick Full Set 2015 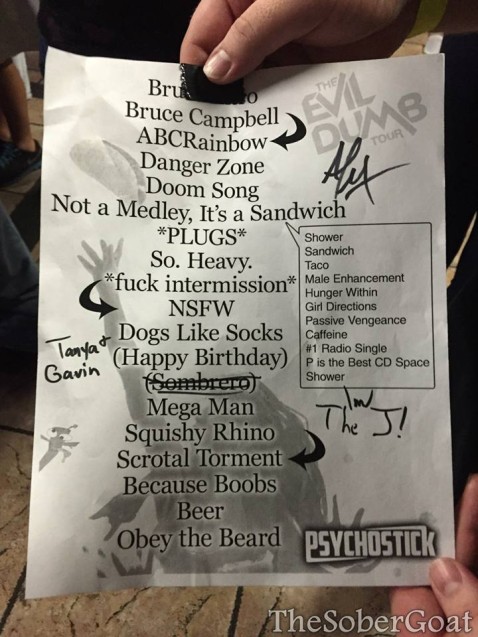