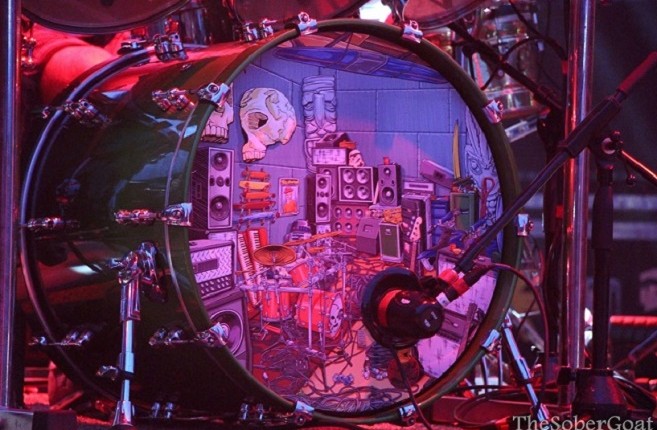 Seeing Slightly Stoopid, Dirty Heads, and Stick Figure for the first time on July 24th at Riverfront Park in Cocoa was the sunshine on an otherwise very rainy Friday. After a day of nonstop pouring, it was incredibly fortunate the skies cleared in time for the show. I appreciated the warm sun and how a perfect breeze continuously rolled through the park even more than usual. The sights, sounds, and feels were absolutely beautiful for the rest of the night!

Stick Figure started out the night of music with one of my favorite songs, “Coming Home,” from their latest album, Burial Ground. What stood out to me was that the whole band was seated, which created a more relaxed vibe. I heard their equipment had gotten rained on, but the band made the best of it, playing a stripped-down set. They sounded excellent! The vocal harmonies Stick Figure produces are among the best of any reggae/dub band I’m currently listening to. I loved their song titled “Sunshine and Rain” and how its sweet melodies captured some of the day’s feels. The ground was swampy (understatement perhaps?) and my feet were soaked, but I could only see beautiful sights and smiles all around, so I didn’t have a care in the world. Stick Figure finished off their set with “Smokin’ Love,” a great way to lead into the Dirty Heads’ set. Here’s a video of the song Richie (the Sober Goat) managed to capture.

Dirty Heads also played somewhat of a stripped down set. I love catching acoustic sets because they bring out a whole new dimension to a band’s style, and for Dirty Heads, it worked very well. Richie caught a couple songs from this set too, including two of my favorites, “Your Love,” and “Gold to Me.”

I was also pleased to hear “Stand Tall,” which I think was the first song I ever heard by the band. Some the other highlights were “Lay Me Down,” “Sloth’s Revenge,” and “My Sweet Summer.” Slightly Stoopid, the night’s headliner, brought the deep grooves as soon as they came on. I had just the right beer buzz for their set, and they played quite a few of the songs I was hoping to hear, namely, “Bandelero,” “2am,” “Pon Da Horizon,” “Prophet,” and “Closer to the Sun” (my favorite). I could tell from looking around we had some great energy flowing through the crowd. I was most certainly feeling the rise and fall wave of the reggae inspired jams. The Sober Goat (ha, sure) caught some of the highlights of this set as well.

Check out all of The Sober Goat’s photos from the show!

To close out the set, Slightly Stoopid gave us a killer guest feature version of “Express Yourself” with Dirty J and Duddy B of Dirty Heads on vocals. You can find video above. It was an amazing way to finish up the show, but after amping up on that note, I definitely wanted to hear more! Two days later, Sunday, July 26, Richie and I decided go to the Vinoy Park in St. Pete to do it all again!

I wasn’t able to catch much of Stick Figure the second time around, but I have no complaints. I was extremely happy to hear “Breathe,” my favorite song by them, and was grateful to have the opportunity to attend an extra show from the “Everything Is Awesome” Tour!

I was able to see a lot more of Dirty Heads the second time around, and this time it wasn’t an acoustic set by any stretch. They brought the full-on electronic, chest-thumping bass into to the mix and threw down heavy from the start. The first song they played was “Franco-Eyed,” which had more of a hard-hitting hip hop feel than any of the songs they played at the Cocoa show. They didn’t ease up with their follow-up song, “Burn Slow.” It wasn’t until the third song they slipped into reggae mode with “Dance All Night,” followed by “Your Love.” The set had a great flow to it with other songs like “Hipster,” “Check the Level,” and “Silence.” Again, they finished out their set with their popular song, “My Sweet Summer,” which is always a good call.

Overall, it was a more energetic performance and they played a couple more songs than the last show, this helped make up for the rain which poured down leading into Slightly Stoopid’s set.

I was thankful I got a cold beer and found a spot under a tree when the rain started coming down hard, even though it didn’t offer much shelter. Many people left the show because it got a little too wet and muddy, but everyone who waited it out was treated to perfect skies for the rest of the night. And Slightly Stoopid gave us an even better set than their show in Cocoa.

Maybe it was just my state of mind (hehe 😉 )  or the fact I was surrounded with good friends, but there seemed to be more soul radiating from this set compared to the previous show. It might have been Slightly Stoopid’s effort to make up for the awful weather, but in any case, it was totally one of the best shows I’ve seen so far this year.

Unfortunately, we were not able to capture any videos for this show, but I did manage to find this video of the song “Never Gonna Give Up,” guest-featuring Don Carlos, which captures the mood of the evening.

I wish I could remember more of the details of what was played to compare notes with the Cocoa show, but this was one of those times I completely embraced living in the moment, especially after all the rain and being completely soaked from head to toe, it was nice to just let go for awhile.

I’m looking forward to their set at Suwannee Hulaween more than ever now! I can’t even imagine how glorious it’s going to be with cooler weather and being at the Spirit of the Suwannee Music Park!