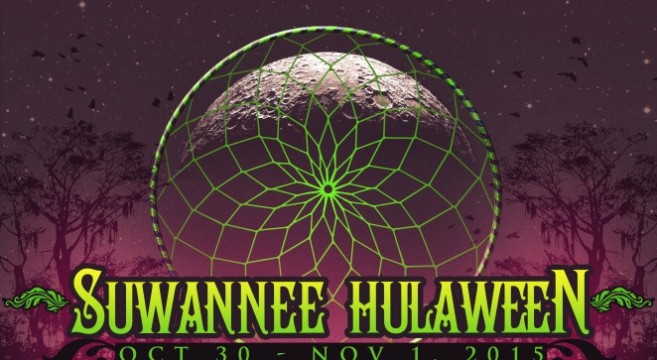 In case you haven’t heard already, the first wave of the Suwannee Hulaween 2015 lineup has just dropped and it’s been rolling huge swells of excitement through the Florida festival community and well beyond! This three day event, prominently headlined each year by the String Cheese Incident, is now running its third year at the Spirit of the Suwannee Music Park and it appears to be gaining some serious momentum based on the artists it’s reeling in this time around.

Last year we caught 61 Smiles from Hulaween and wrote a Hulaween Live Review!

This year, aside from the String Cheese Incident (who are pretty much guaranteed to steal the show with seven whole sets!), Hulaween is bringing on Pretty Lights, Primus, Chance the Rapper (with his live band called the Social Experiment), Sound Tribe Sector 9, Odesza, Slightly Stoopid, GRiZ, Lettuce, Railroad Earth, and Papadosio, among many other awesome artists! I can hardly believe this is only the initial release of the lineup! With both tiers of the “Early Bird” tickets selling out within the first hour of sales opening, the demand is apparently just as monstrous as the lineup, but based on my experience from last year (check out my review!), I can tell you that it’s totally worth every penny of the normal ticket price. It’s more than likely going to be the most extravagant Halloween celebration you will have ever experienced to date. I know it was for me. 🙂

What makes Hulaween particularly special is the beautifully weird art installations and performance artists spread throughout the festival grounds, especially around Spirit Lake at the Spirit of the Suwannee Music Park. This event transforms the whole park into an amazing fantasy world filled with alien spectacles and psychedelic wormholes around every corner. You never know what you will happen upon, and that’s partly due to the creatively festive core-crowd this event attracts. It’s one huge costume party for three whole days (four if you go to the Thursday pre-party, which I highly recommend since Joe Russo’s Almost Dead is playing!). This is definitely the place to let your inner weirdo run rampant!

Are you thinking about going yet? Either way, here’s a preview of my top 10 artists and bands at this year’s Suwannee Hulaween (based on the lineup we have so far) for your consideration. 🙂

To be honest, I may be a little biased, since these guys are friends (they’re from Florida!), but they are pretty fucking awesome! I’m glad they made it onto the Hulaween lineup (AGAIN, what?)! Ok … who’s bribing the String Cheese dudes?! 🙂 Seriously though, there’s a reason Post Pluto made the cut, and I’m looking forward to seeing them rock out. If you like 60’s psychedelic rock and some good funky jam band vibes, these guys will put a big smile on your face and some extra groove in your step.

This is one of my favorite funky jam bands out there right now and I’m extremely pleased to see them appear consistently on lineups more recently. Earphunk throws down some of the heaviest funk jams and most blistering guitar solos I’ve ever seen for this genre. They even perform some fantastic renditions of Daft Punk sometimes, too.

Check out some of this video from Dopapod’s recent performance at this year’s Bonnaroo, and maybe you’ll understand why they’re one of my favorites. I like to think of Dopapod as the evolved form of Metapod (you know, that weird, green cocoon Pokemon that does nothing but get harder). Dopapod is what happens when you find that extremely rare alien crystal in your game, and Metapod blows a fiery crater in the earth while transforming into a spiky, laser cannon wielding, purple cocoon dude, riding in a killer steampunk flying saucer. 😛
Fun fact: Dopapod loves palindromes (their name and all their album names are spelled the same backwards and forwards). Cool.

I first saw these guys at Wakarusa 2013 and they blew me away! I had heard some of their music just shortly before seeing them and I thought it was just going to be a solo laptop producer artist pushing some buttons. Wrong! The Floozies are made up of a guitarist/DJ and a drummer and their sound is very live. Imagine Toejam and Earl meets Daft Punk with some Space Jam sprinkled on top for good measure. They throw down some of the funkiest, tightest, hard-dropping electronic music I’ve heard!

Last year, I distinctly remember saying to myself, “This would be the perfect lineup if Papadosio was here.” I’m guessing the festy gods heard my wishful thinking and granted me this beautiful gift. Papadosio is my favorite festival scene band. No, not just “one of” my favorites, they are my absolute favorite. If you listen to them long enough you will probably fall in love with their music too.
Fun Fact: The very first review I wrote for Shows I Go To was a Papadosio Live Review!

I saw Odesza awhile back when no one knew who they were (yay, hipster points?). Actually, I didn’t even know who they were, but I was impressed by their unique sound. It’s been awhile since then, and they have blown up in popularity, which is evident by their continued appearances and high placement on festival lineups. Their latest album, In Return, is a brilliant work of electronic art. I’m looking forward to finally seeing them on a large festival stage!

As the name implies, STS9 is a band that sounds like it descended from deep space. There aren’t many bands that are crazy enough to venture into the wild musical territory that these intergalactic explorers are willing to traverse. They mix the best of both worlds between electronic and live instrumental performance. Their live shows have the power to transport you beyond this dimension.

I saw Pretty Lights at Bonnaroo a couple years ago and I say hot DAMN … there’s a reason it’s called Pretty Lights. This is a spectacular show. I’m not sure I can find a word big enough for it. This is something you will be able to enjoy even from a mile away.

Come on, it’s Primus! This one doesn’t even need an explanation. These guys have been raging pure funktastic weirdness since the 80’s. There isn’t a more appropriate party for them than a Halloween festival. I’m hoping for lots of costumes, props, whimsical theatrics, and wild special effects for this one. Read my Primus Live Review from when they invaded Hard Rock Live.

No, seriously, it’s not just because it’s their festival. They reign supreme in this realm. This is arguably the best jam band in existence right now, especially for this particular environment. There’s absolutely no telling what Cheese will have up their sleeves for this year, but if last year is any indication of anything, you might want to bring a spare face with you. Those things can be hard to find when they melt to the ground in the dark. Last year they threw covers of Michael Jackson’s “Thriller” and Led Zeppelin’s “Stairway to Heaven” into the mix among tons of mind blowing original songs. Wow, it’s anyone’s guess …

Honestly, it’s hard to pick only 10 highlights out of the incredible lineup we have so far, but I thought it would make things a little more fun. I highly encourage you to look up all the artists and see what your own favorites are! I’m looking forward to having the best Halloween weekend of my life this year at the Suwannee and I hope you will be there to celebrate with me! 🙂