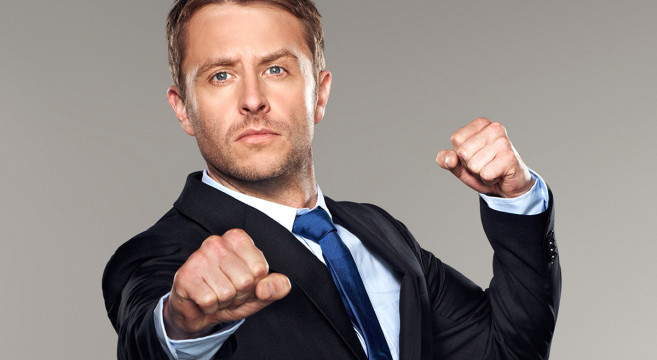 POINTS!!! 1-800-DEAD-LIVE (in creepy zombie voice).  These are the two sayings that currently come to mind when I hear the name Chris Hardwick (the Nerdist) mentioned.  I’m of course referring to the two television shows he is currently host of:  @midnight (a/k/a At Midnight), a nightly celebrity game show series on Comedy Central where he carelessly awards contestants by saying (yelling) the word points; and The Talking Dead, a live talk show on AMC following episodes of The Walking Dead.  He also hosted the live talk show Talking Bad which, you guessed it, nerded out on the AMC television series Breaking Bad.  Many will also remember Chris Hardwick from his days as on MTV’s Singled Out dating game show, where the show’s announcer once introduced him as the God of Love, to which Chris replied upon his stage entrance:

Chris is more than just a man … he’s a stand-up comedian, podcaster, television personality, contributor for Wired magazine, and creative head CEO of the multi-platform media behemoth known as Nerdist Industries, which has grown to include the Nerdist.com website, a premium YouTube channel (youtube.com/nerdist) with over a million subscribers, 2.3 million Twitter fans, and a podcast network including the flagship Nerdist Podcast that averages 5 million monthly downloads.  His Comedy Central late night show @midnight premiered in October 2013 and follows the powerhouse block of The Daily Show with Jon Stewart and The Colbert Report with Stephen Colbert (now The Nightly Show with Larry Wilmore).  With Colbert gone since December 2014 and Stewart leaving this week, Hardwick will stand alone as the channel’s late-night veteran.

Hardwick talks openly about being a recovering alcoholic and has been sober since October 8, 2003.  In April 2015, he revealed that he suffers from an onion allergy.  What personal issued is he currently struggling with? What other vegetables is he allergic too? Who knows what we’ll learn and laugh about when he performs at Hard Rock Live Orlando this Friday, August 7, 2015!

On November 10, 2012, he filmed Mandroid, his first one-hour stand-up special for Comedy Central in New York City.  Check out this clip from the special, where he gives an important warning to hipsters threatening the nerd lifestyle.