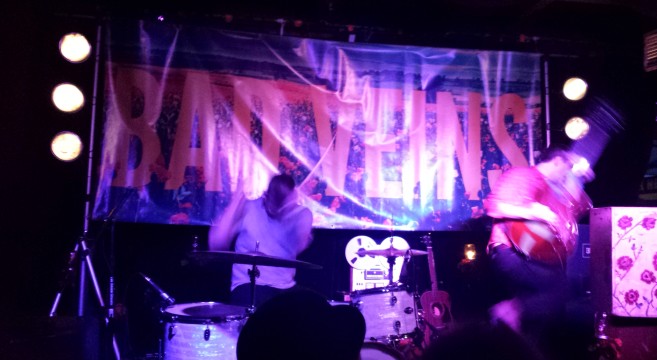 I love sriracha. I love whiskey. When you mix the two in a shot glass and chase it with a pickle-juice back, you’ll end up with two slightly intoxicated, bantering members of Bad Veins on stage. The part that matters is that I can safely say, when Bad Veins were actually playing songs, this was the best I’ve ever seen Bad Veins.

Bad Veins is a two piece rock band, like Local H or Britt Daley. Instead of having Scott Lucas, a Macbook, or something digital to accompany them, they run a reel-to-reel tape player onstage throughout their performance for backtracks. It’s really badass.

Bad Veins crafts their catchy indie rock tunes in such a fun and adventurous fashion that you can’t help but dance to the rhythm and nod to the beat. The banter was most definitely unexpected because out of the 4 times previous that I’ve seen Bad Veins, it’s been a lot of rock and little talk. Luckily, I caught myself laughing again and again and all the hilarious shit they were slurring. Jake said “If I throw up, it’s because I’m cool.” Here’s a shitty pic: 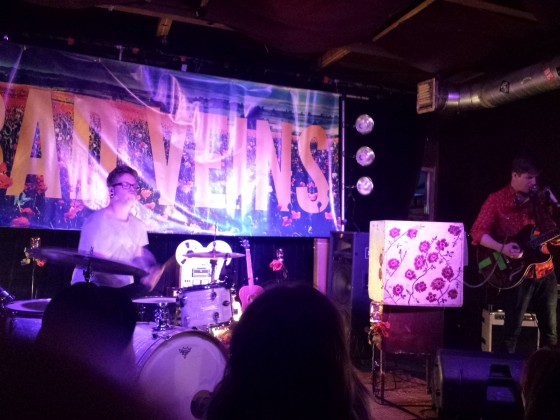 Having good local bands open shows for national touring artists are a great way to build a solid music scene in your community. “They have a look” said my girlfriend with a nod of approval in reference to the local opener, Me Chinese. Three of the members of this Orlando band had their shirts off, no tattoos, and black jeans on. The lead singer was wearing a button up. As they shredded through an awesome tune called “Eat It,” I couldn’t help but let the nostalgia sink in. I reminisced of how fun it was to be in an indie rock n’ roll band with huge dreams of being “signed” or at least opening for a cool national touring band (like Bad Veins). I wonder if Me Chinese share these same ‘Indie Dreams’ that I once had. I’m looking forward to hearing what they sound like recorded. If they do have anything out, I couldn’t find it on my computer machine.

I must admit it was a bit difficult to not focus on the humanizing effect of watching the two members of Bad Veins break into a game of pool in the next room during Me Chinese’s set. This also brought me to the tangent realization that Will’s Pub has expanded the pass-through opening between the billiards room and the live room. It’s about twice as large now! I’m pretty sure I’m the only one that that had a negative effect on; distracting me from a band on stage.

I always give bands a chance. I like to listen to albums all the way through and always start on track one. Track number two on Bad Veins self titled debut in 2009 is entitled “Gold and Warm.” The epicness of the intro is something you would hear on a Coldplay album. The drums kick in for a dancy bit followed by the backtracks. Then guitar, vocals for the verse, pre-chorus. Pause. Boom! The first time I heard the chorus to this song, it surprised the shit out of me. I smiled as the barb went through my cheek and hit ‘repeat’ when it was over. Check out the song that got me into Bad Veins “Gold and Warm” below:

I thought their new drummer was going to beat his way through the stage floor during “Afraid!” Bad Veins introduced their fans to Jake in 2013 as a replacement to Sebastian. Holy. Shit. This dude knows his way around a set. He plays with a purpose and force. Almost every beat he played was an accent. And being a drummer who thoroughly enjoys a hard-hitting drummer, it was fucking thrilling watching him.

I always thought it was so fucking cool when I saw lights in syncopation with songs, like one of those crazy Christmas house lights videos. Bad Veins had lights inside mason jars strewn around the stage and their equipment. They had multiple spotlights on each side of their huge backdrop banner. All of these lights were syncopated to their music in such a flawless and aesthetically pleasing manner. Coolest stage setup I’ve seen all year. Here’s another shitty pic: 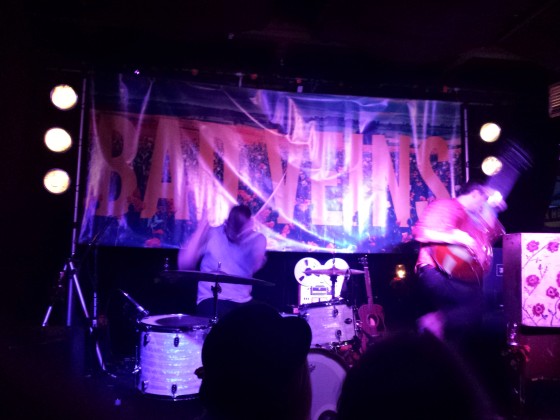 When fans were given the option of “I Turn Around” or “Don’t Run” the decision was unanimously in favor of “Don’t Run,” despite the fact that this was “The Turn Around Tour.” Check out the obvious fan favorite “Don’t Run” below and catch Bad Veins on tour in the U.S. through June. And don’t buy them Pickle-back Whiskey shots. 😉 Dates below.