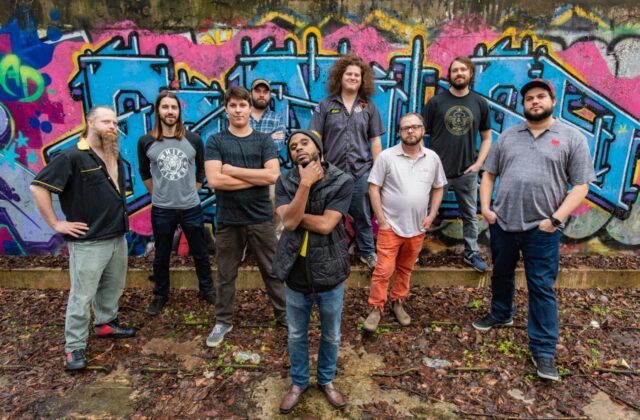 Funk You is hitting the ground running in 2022 and have kicked started their first tour of the season here in Florida. This week the 9-piece funk unit is making a stop at Orlando’s Will’s Pub on Wednesday February 2, in route to The Green Parrot down in Key West. Funk You has local guitar wonder boy Daniel Heitz Band kicking things off this Wednesday at Will’s Pub at 9pm! Get your pre-sale tickets here for our favorite February funk show! (TICKETS HERE). Pre-sale tickets start at $12 with day of show tickets being $15. Doors open at 8pm with Daniel Heitz Band kicking things off at 9pm followed by Georgia’s premiere funk band “Funk You” closing out the night at 10:30pm

One of our journalists got to catch up with the drummer of Funk You, Will Clark, talking about tour, new records, and how to keep on “Moving Forward.”

Will Clark of Funk You Interview

Chuck Magid, SIGT: Will Clark, the drummer of Funk You from Georgia, USA. You guys are coming down to Florida for a two-week Florida tour supporting your new record. Tell us about the upcoming tour.

Will Clark, Funk You: What’s up, Chuck? Thanks for having me. So yeah, Funk you. We are embarking on our first tour of the year, and we’re excited to be in the south and hit a lot of Florida cities we haven’t hit in a while. One is Wills Pub in Orlando this Wednesday. So, we’re excited to be back in Orlando. Our guitarist Evan Miller went to Full Sail down there and we got a cool little recording gig at Full Sail on one of our days off. So, we’re going to be able to get back in that studio with all their pretty expensive gear and cut a few tracks. But yeah, all in all, we’re just excited to be on the road and we’re trying to make lemonade out of lemons. We’re just trying to keep doing our thing and spreading our music and promoting this new record we just put out called “Moving Forward”. We’re just excited to be down in the south with our homies.

SIGT: For people that haven’t seen “Funk You” before, why should they come to the shows and what can they expect from this funk ensemble?

Funk You: Well, we are a nine-piece funk band, hence the name. And we’ve got a three-piece horn section, elite singer, guitarist, keyboardist, percussionist, and bassist obviously. And I’m the drummer so we like to keep it funky, but deceivingly enough we do have some slow ballads and some rock songs and not everything we put out is straight ahead funk. But we always keep the roots of the music writing a little funky. We can be heavy, funky, chill, happy, sad… all the things. So, you can expect a nice collaboration of emotions when you come see us. We are trying to make you dance, so put on your funky red shoes and dance the Blues!

SIGT: Despite all things covid that has set back the entertainment industry, you guys have had an impressive year. I know this year you guys played Resonance Festival, Suwannee Hulaween, you opened for Galactic at the Caverns and recently opened up for Pigeons Playing Ping Pong at the Asheville Civic Center for NYE . You guys are killing it. Tell us about the different spots you’re playing in Florida on this tour.

Funk You: I’ll just quickly give you a rundown. We’re playing January 27 in Jacksonville at Underbelly. The 28th, Boca Raton Funky Biscuit, then the next day, the 29th, we’re in Tampa at New World Brewery. Then we got February 2 at Wills Pub in Orlando, Feb 3 at Guanabanas in Jupiter, FL, and an epic weekend in Key West at the Green Parrot. Speaking of this past year, playing The Caverns was so sweet. I’m sure it’s a front of house engineers’ worst nightmare with the reverb up in that place, but it was crazy. It was the first time in a while the front of house guys like, can you play quieter? We were like, yes, we will do our darndest to play quieter. Palmer’s, the percussionist, I was like, Palmer, you need to just take away that crash cymbal for tonight. ha-ha! And yeah, That Resonance Festival speaking of dreams coming true, that was crazy. Just being at nighttime with the light rig on a giant stage at a festival, playing in front of 10,000 people. We all are very thankful. We’ve hit a lot of cool milestones this year and hopefully plenty more “moving forward”.

SIGT: That is a stacked FL tour! And speaking of “Moving Forward”, tell me about your new record “Moving Forward” and about the singles and maybe the process of having that time during the pandemic to home in on the studio process?

Funk You: Yeah. So, the record is called “Moving Forward”, the first single was called Moving Forward as well. It’s a song we collectively wrote the music too, and I wrote the lyrics too. It’s crazy. It has a lot to do with this covid situation, but it’s just about being a musician on the road, all the struggles and the triumphs and sleeping on the floor one day to a hotel the next day and just trying to keep moving forward, keep everything positive and keep growing your band and brand. I’m lucky enough to have a studio that I’m in right now. We had already written most of these songs and we had already started working on some of them. So, we were able to have the time to finish the writing and recording process and produce this new record. And now “Moving Forward” is out and we are stoked to be touring to support it!

SIGT: You talk about Moving Forward and being on the road and developing your band, but really at the same time just chasing, I’m sure for all of you, a dream that you guys have always wanted to do this. And you guys are now at a point where you can travel, tour, write your music, release it, and travel the country. Doing what you love most is probably playing and performing on your instruments. How does it feel?

Funk You: Definitely. As you know, you are one of us. We’re all just living the dream, trying to make it the reality day in and day out.

SIGT: Well, Will I hope you and the guys travel safe and have a great tour. Thank you so much for your time and I’ll see you at Will’s Pub in Orlando, FL on Wednesday February 2!

Funk You: Thanks a lot Chuck. I appreciate you.

We’ve teamed up with Montgomery Drive and Oriented Music Group to bring you some FREE GA tickets to catch FUNK YOU this Wednesday February 2 at Will’s Pub.