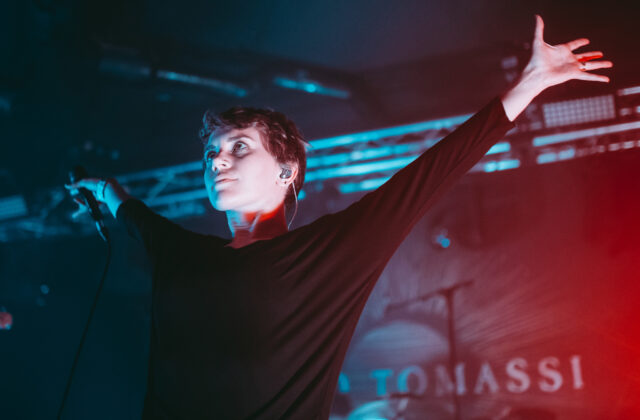 Since their first release in 2008, English band Rolo Tomassi has shaken rooms across the world. They first kicked some heads in at Download Festival (England) before making their first trip to the United States providing opening support for none other than Jane’s Addiction. Now, a decade-and-a-half later, Orlando, Florida is getting their chance to witness these five destroy the stage at William’s Pub on a Monday night — September 12, 2022. You won’t want to miss this experience. This is their only Florida show. Opening touring support by Cryptodira (NY) and The Callous Daoboys (ATL) and local support by Bay Street.  GET TICKETS HERE. Their first album, Hysterics, opens with a musical statement, bending genres and ears alike. Lead singer, Eva Korma can sound like Geoff Rickly (Thursday) screaming sharply before effortlessly melting into a swoon. The girl is like a cute little hurricane that’ll f*ck your shit up and smile afterwards. It’s brilliant. But, that’s just the tip… the music is absolutely insane. Their albums are hot oil popping with math-core, space-rock, progressive, experimental, and are just plain mental. Just ride out their opening track “Oh, Hello Ghost” below. (Screaming starts post the 2-minute mark.)

Their next album, Cosmology (2010), was produced by fucking DIPLO. What?! It ranged from punk to jazz. From there, Rolo Tomassi had no rules. They released a three more albums over the next decade, Astraea (2012), Grievances (2015), & Time Will Die and Love Will Bury It (2018). Now their on the road supporting their 2022 release, Where Myth Becomes Memory. There are some fantastic album names in their discography and even more intelligent song titles. Check out some of the newest offerings below. If all these all new to you, stop listening and just come experience this. September 12th at Will’s Pub in Orlando, FL. Arrive early so you can catch the openers, Cryptodira (NY), The Callous Daoboys (ATL), and Bay Street. Our friend with the label shares with us “Callous Daoboys record drops 2nd September, also an absolute ripper.” GET TICKETS HERE. We’ve teamed up with our friends to give you a chance to WIN (2) GA TICKETS to ROLO TOMASSI at Will’s Pub in Orlando, FL on September 12!