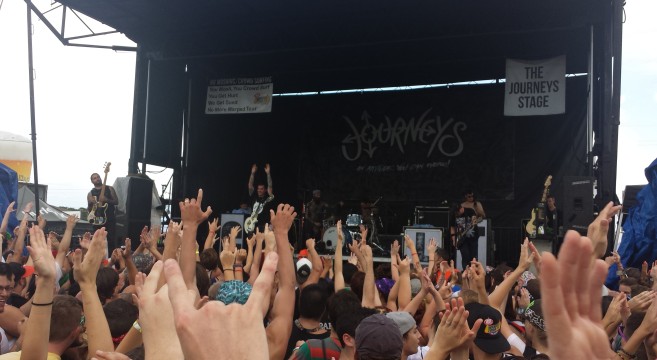 This year was a bit different. Still hot as fuck and still a really fun time but a lot has changed in the past twelve years. The most common question was “where the fuck are the skaters?” No mini ramp this year.

Things got started when I caught Bayside on the Journey’s stage at 12:45pm. It took a few songs to penetrate the midday heat but the crowd finally got going. Bayside was playing “Sick, Sick, Sick” when the rain began and then it started to actually feel like Warped Tour. Here’s a shitty pic: 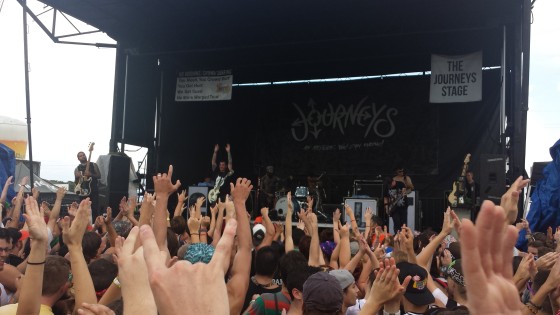 Jeff got there a little earlier to catch Ice Nine Kills who he said were fucking great. After Bayside, I wandered around drinking a Pacifico Lager, which I’m stoked they had, and looked for places to smoke until Less Than Jake began at 1:45. Less Than Jake’s Losing Streak album was the very first cassette tape I owned. I purchased it from this girl in my fifth grade class named Autumn for $5.00 when I lived in Orange Park. Over the next two weeks I sat in my bedroom and learned every fucking word on that tape. I lost it when I moved a few years later and didn’t hear it again until I discovered how to download music off the internet and burned it to a CD. As soon as I put that thing in my aftermarket CD played I installed in my 1989 Chevy S-10 pickup truck, I discovered I still knew every fucking word on that album. That was almost eight years later.

Less Than Jake had a circle pit going around the VIP tent between stages. This song was not on Losing Streak. I caught this video of it on the Shows I Go To Instagram:

I headed over to catch a bit of Bad Rabbits because when I went and saw them on a whim last year in Orlando I left the venue thinking “Holy fuck, they rule!” Halfway through their set, the lead singer Fredua got the crowd set up for the infamous “Wall Of Death” where the crowd parts right down the middle, created a ten to twenty foot empty space so they have some running room to slam into each other when the right part of the song kicks in. These things always make me a bit nervous however Bad Rabbits isn’t a heavy band so I was more intrigued than anything.

To my surprise Fredua jumped down off the stage and into the heart of the “Wall Of Death” where he did a shuffle dance all the way down the aisle we created and even caught a bead necklace around his neck. It was pretty fucking cool. Check out this video I caught of it:

Every Time I Die! I love seeing this band. They are just a bonus when it comes to the Warped Tour lineup – always crazy, always fun, never disappointing. After watching the crowd thrash around are scream back at the handsome Keith Buckley, I made my way to the Beatport stage catch the female fronted Kentucky-based rock band Sleeper Agent for the third time this year. The cute lead singer Alex Kandel rocks the fuck out while she passionately belts out her mix of songs that are heavily rotated on SiriusXM’s Alt Nation. Here’s a shitty pic: 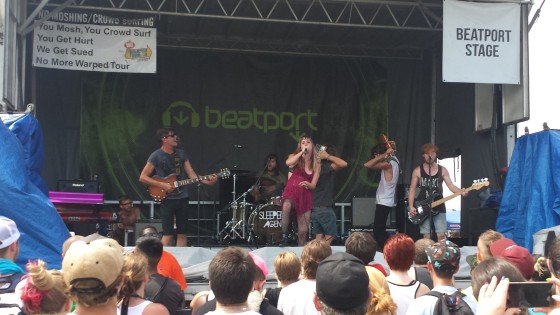 Another thing that was new this year, which you can see in the above picture, were the large banners above every stage that read “No Moshing / Crowd Surfing. You Mosh, You Crowd Surf, We Get Sued, No More Warped Tour.” It was kind of a dick approach and forcefully authoritative which is exactly the opposite of what Warped Tour is about or was about anyways.

I managed to catch the end of State Champs, who I interviewed earlier this year, after Sleeper Agent and they were owning the crowd in front of the Warheads stage. Yes Warheads, those sour candies you used to eat when you were a kid. They were giving out free samples and they’re still just as sour, full of additives, and delicious as always.

Warped Tour has been slowly introducing hip hop acts to the tour. This year, they had two really fucking good rappers – Watsky & Wax, two of my favorites. This was my first time seeing Wax since I missed him when he opened for Watsky last year. My favorite song and one of the realist songs, if you will, that he performs is called “We Can’t All Be Heros.” But, I have to share my favorite video which has 30 Million views on youtube and is hilarious. Check out “Rosana” by Wax:

Watsky! The fastest rapper in the world and one of the nicest guys I’ve met – Mr. George Watsky. I was looking really forward to seeing him perform live. The last time I saw him I cut my finger open and had some great sex so I was hoping for an equal amount of pain and pleasure this time around.

Record Store Day 2012: I purchased more than $50 at Park Ave CDs so I got to chose a few free items off the record store day table. Small things – stickers, coasters, posters, and this one compilation CD. I thought, shit, I used to love compilation CDs so I’ll grab that! The fourth song on that CD was “Sloppy Seconds” by Watsky. That was the song that sold me on Watsky. It became the soundtrack of my summer, yes, I really mean that, and it was the song that got my girl and I to travel up to Athens, Georgia last year to see him. Listen to the words:

I was a bit disappointed with Saves The Day’s set who I caught after. There weren’t a lot of crowd pleasers in setlist, unlike their 30 song set last year. You would think, a band like Saves The Day, with thirty minutes to play, would play the fucking hits and leave the audience swooning. But they didn’t. Chris Conley rocked out really hard in the corner by his amp for about three solid minutes at the end of their set though. That was cool but still wasn’t no “You Vandal.”

Anberlin played their very last Warped Tour this year. Their final show ever (until a reunion) is going to be at House Of Blues in their hometown of Orlando in November. I’m pretty stoked about it. Anberlin fucking killed it at Warped Tour. Playing all the hits with an electric energy and flawless sound. Everything about this Anberlin picture screams ROCK: 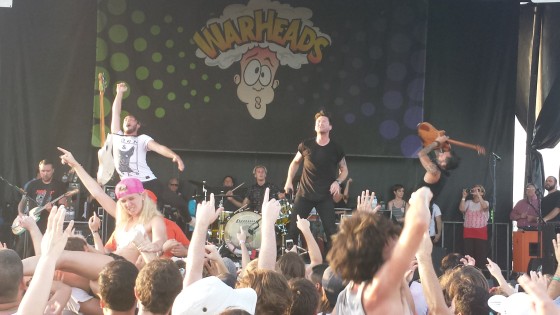 Their drummer was on double duty that day. I caught him earlier drumming for Yellowcard who played mainstage and had one of the biggest audiences of the day. Drumming for Yellowcard are some big shoes to fill. I was always a big fan of their previous drummer but this dude measures up very well. I was standing as far back as I could when I took this video of “Ocean Avenue.”

On A Side Note: One thing to look forward to each year at Warped Tour is BBQ Chicken on a stick! That shit is so good and it seems to be at Warped Orlando every year. I wonder if they take their chicken on the road travel with the tour? That would be hard work – cooking chicken all day in the heat for sweaty kids then driving all night. Fuck that. Respect though. 🙂

Whether the Warped Tour yells for you to stop moshing and crowd surfing, or stops bringing the skaters on the road, or does some other bullshit that people scowl at, if they continue to book quality artists and bands that show Florida a really good fucking time, I’ll show up and be a part of it. Until next year Warped Tour.