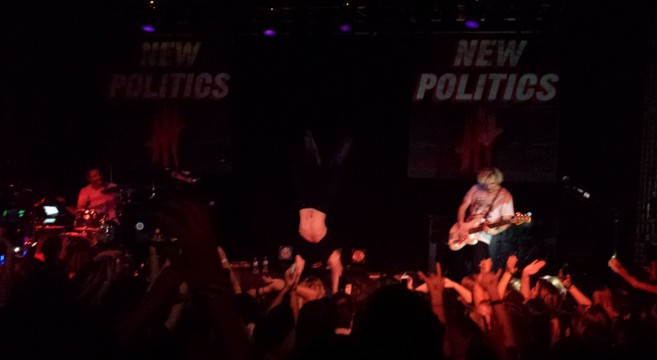 “This was one of the first shows to actually sell out on this tour.” – David Boyd, New Politics. I just have to say: Fuck Yeah Orlando! 🙂

I’ve seen a shit ton of shows at The Social Orlando. I’ve never seen a show like this. Breakdancing, crowd walking, headstands, one of the hardest hitting drummers I’ve ever seen, and a guitar hitting the ceiling. That was New Politics.

Even though I’ve seen New Politics a couple times previously, I haven’t seen them headline. I doubted that they could keep that same degree of energy going for an hour and twenty minute set. I was wrong. Dead wrong. They fucking lit The Social up like the sky in that LG 84” End of The World Prank. It felt like the entire room was moving! Every single person in that room was swooning over their live performance (even the bartenders). Here’s a shitty pic (yes he’s upside down): 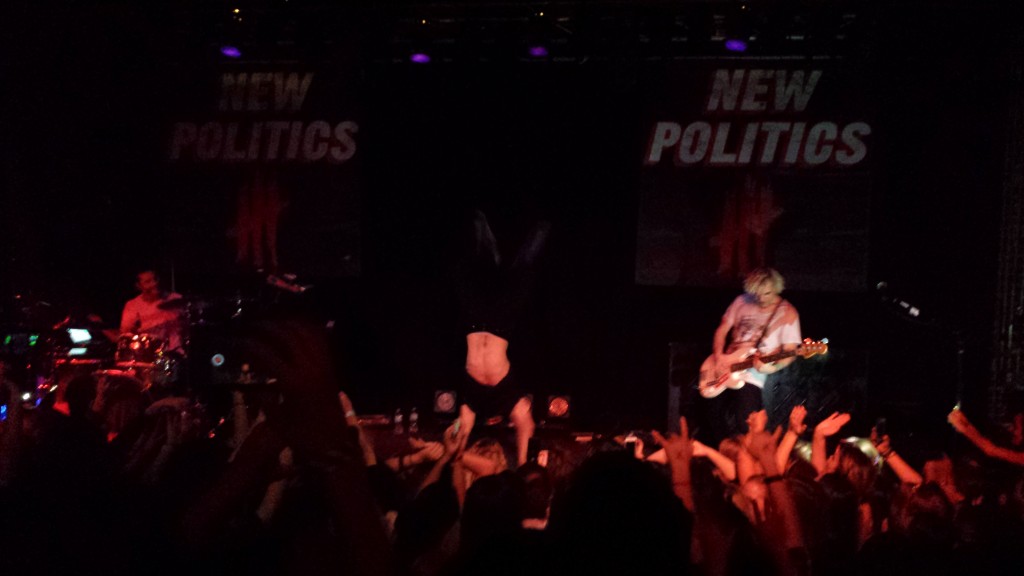 It was a perfect end to a perfect day. Started with an amazing brunch at Ethos Vegan Kitchen, went to see the new Coen brothers flick, Inside Llewyn Davis, at the best theater in Florida – The Enzian, and had a chicken bowl at Chipotle (Chipotle is so god damned delicious but it unleashes a Satanic fury out of my brown hole within 20 mins every time… Not as bad as those German Gummy Bears would though). I then walked downtown and watched three incredible, high energy bands at the best music venue in Orlando – The Social. Speaking of perfect, check out the brand new gorgeous video for Tonight You’re Perfect by New Politics shot in Iceland:

I got to the show just as Sleeper Agent started. I was stoked. I’ve been looking forward to seeing Sleeper Agent for about a year now ever since I heard their super fun, super killer song called Get It Daddy. Jesus Christmas! – The breakdown/bridge in that song is sorcery! It’s near impossible to keep yourself from mentally rocking the fuck out at your work desk. Check it out for yourself. Here’s the dizzying video for Get It Daddy by Sleeper Agent:

“Dude, you’re freaking awesome!” – girl in the crowd. That girl was fucking right! Sleeper Agent was awesome. Their lead singer, Alex, is a 21 year old firecracker who is hard to capture in a still frame. She whips her dark red hair around whilst rocking the fuck out like she fronts a metal band. It’s pretty rad. The band is fresh off an arena tour with Fun and threw out some free shirts during their set. Afterwards, they stuck around the merch booth for the entire remainder of the show, taking pictures with fans and signing vinyl.

Short girls [and guys] have such a difficult time seeing at concerts. It sucks. Attention tall people: Go the fuck to the back of the room! You can hang out anywhere and see just fine. When you’re up front, you’re kinda being a dick head. What constitutes “tall?” Look at the fucking people around. If you’re taller, move back. Be courteous; not selfish. There’s plenty of other places in this world for you to be an asshole at – don’t be an asshole at a show.

Magic Man was impressive. “This is our first time in Orlando.” – Alex, lead singer. Every single one of the girls at the front of the pit had their hands in the air. Every single one of those hands had a big black X on it. I seriously thought girls were going to start throwing bras on stage like at the Lydia/ Tallhart show! When they weren’t freaking out, they were staring – identical to that Cat Meme (heavy breathing). After their set, I heard a girl say “Oh my god! I touched his arm!” as she walked by. Gad Damn the girls love this band!

I liked them too though… Their drummer is really fucking talented. I watched him the majority of the time. Their keyboard player looked like Kate Mara from House of Cards (new season Feb 14!). She was wearing a white button down with her hair pulled back. I’m into that.

Keep your ears out for Magic Man. They’re playing a bunch of festivals over the summer and with their hit single “Paris,” I’m sure we’ll see more of them throughout the year – I’ll be watching the at Big Guava Fest. Check out the video for Magic Man’s Paris below:

The first place I heard all of the bands from the show was on Sirius/XM’s Alt Nation. It was like an Alt Nation show! Satallite Radio fucking rules and it’s really important to bands these days. A lot of bands get played Sirius/XM before the rest of the world discovers them – Bastille, Foster The People, The Neighbourhood, Young The Giant, to name a few.

Sleeper Agent and Magic man both had songs called “Waves” and they both played them! Totally different songs but both worth a listen. Here’s Magic Man’s Waves:

The last time I saw New Politics, I wrote a review about their show. To my surprise, they actually fucking read it! I know this because they replied to me, thanked me, and told me “that was beautiful.” Check it out:

I can’t even express how high this got me. This was actually my inspiration to continue writing for this shitty blog! So Thank You New Politics. Thank you.

If you didn’t know, the lead singer and guitarist of New Politics are from Copenhagen, Denmark. They picked up their all shit and set sail to America about 4 years ago to follow their musical dreams. Now those dreams are coming true. 🙂 I wholeheartedly agree with the comment they made that evening: “If you are a little crazy and have a dream, follow it. Don’t let go.” – Søren, Guitar & Backup Vocals.

I’m friends with another great band from across the pond – The Cold Start (who are currently on tour) – and I know there’s a lot of hurdles to jump over when trying to start a new life in the United States. Saving up the funds, going through the painful application process to obtaining citizenship, obtaining a work visa, getting it extended, getting a drivers license, not to mention the extreme difficulty of making it in the music industry… New Politics did it. They took all those obstacles, bent them over, and fucked them. They overcame. They persisted. They made it. The key to success is not giving up. I think New Politics has a beautiful success story – they should write a fucking book about it!

New Politics killed it Saturday night. David Boyd entertains like no other – breakdancing, spinning, flipping, pop-n-locking, slow motion dancing, head standing, oh and not to mention he is an awesome vocalist! I said it before but their drummer, Louis, must break a lot of cymbals because he beats the shit out of his drums! And his drums fucking lit up! I was fully erect.

Søren goes absolutely insane during their live performance. My jaw was hanging after watching him throw his guitar into the air and bouncing off the ceiling of The Social. It was nuts! Check out the fun filled video for Harlem by New Politics:

New Politics are the most appreciative band I’ve ever seen. They have made it widely known, via social media, that a lot of fans have been inquiring about meet and greets at their shows. A lot of music fans are willing to pay extra for this personal encounter and a lot of bands happily take their fans money for this. Again, New Politics clearly said “Fuck it” to this. Here’s a shitty pic: 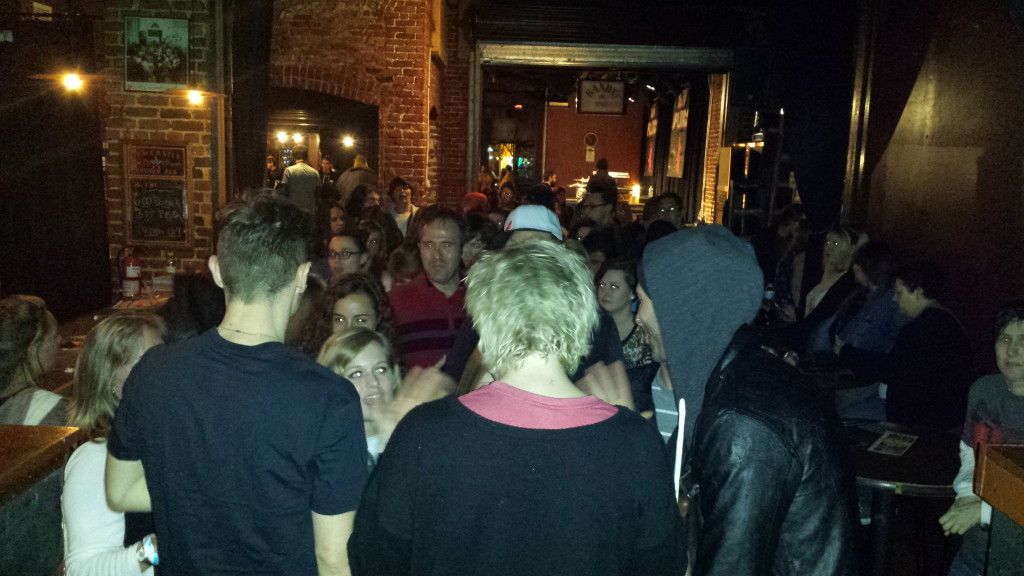 They posted the following simple and loud message: “We will have meet and greets at all of our shows! Here’s how to get one: Show up at the merch table and instructions will be posted as to where the meet and greet will be!” Simple and beautiful. This band consistently goes the extra mile to show their fans how much they fucking love and care about them. It’s admirable.

They are heading out as main support for Fall Out Boy and Paramore’s arena tour, Monumentour, over the summer. They have a bright future indeed and they fucking deserve it. If New Politics ever announces a show year you, buy tickets immediately. They will sell out and you won’t want to miss them.