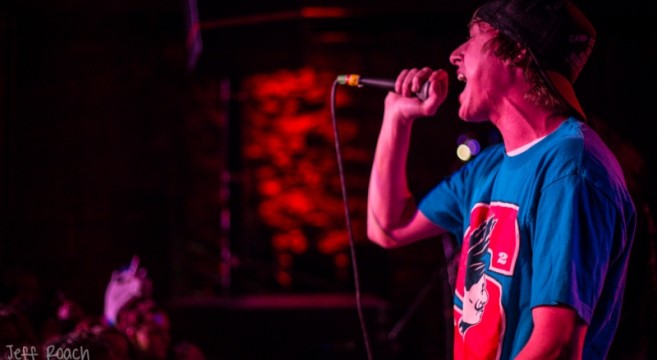 Derek DiScanio talks about the success of the new State Champs album, Steve Klein’s child pornography charges, beating NFG on the iTunes charts, European tour dates, being on the Warped Tour this year, bands he looks up to, and more, in this exclusive interview.

Mitchel: I’m Mitchel Foster and I’m here with Derek DiScanio of State Champs. First thing Derek, thank you for taking the time to do this man, I really appreciate it.

M: So I have to tell you, my generation, I grew up listening to New Found Glory and Saves The Day. And I fucking love those two bands. So after listening to your newest album, well your debut album, I have to make a statement:

State Champs is the New Found Glory and Saves The Day of this generation.

M: It is man. And I fucking love it too [the album]. You heard that shit first here.

M: So, this is your first time as a band in Orlando right?

D: It’s our first time here. I couldn’t be happier to finally make it out.

M: Awesome. So how much does it fucking rule that this show is sold out?

D: Great man. You can never expect much from an area that you’ve never played before. The fact we’re lucky enough to be out here with a great package of awesome bands and be [tour] support for something as special as this for the first time… in a city that I’ve always wanted to play and grew up coming to on vacation… and finally being able to play and having it be sold out is unreal. So we’re super excited. Tonight’s going to be fun.

M: Cool dude. So what’s tour been like so far?

D: This tour’s been great! It’s been one of the best support tours we’ve done as far as being able to expose ourselves to new fans and a different crowd. That will help us in the long run for sure. Because we’ve toured with all these different mixes of genres and bands, and to finally branch out a little bit and tour with some bands you normally wouldn’t think that you’d see us on a bill with, is really cool and it’s helped us. Every show I feel like I’ll say “How many people are seeing us for the first time?” and most of the crowd [responds] and that’s a good thing. People are kinda anxious to put their hand up and say it’s their first time seeing us or first time even hearing us. But I’m all about it. I’m so about the new exposure and new fans and playing to new people and new places. And it’s been awesome. The reception has also been great! Even for kids’ first time seeing us, the shows have been wild, crowds have been super active; lots of energy in these shows which is unexpected. But I couldn’t ask for anything better; it’s great.

M: Awesome man. Well thank you for coming for sure.

D: This is out first album. So, none of that was even in the picture at all until this [info] came out. So it was very surreal. Very surreal to hear that something like that can actually happen for our first real album ever. So when we heard about that stuff, it was crazy. We were on tour with Bayside and Motion City Soundtrack at the time, the day we released our album, and I think we were in like Iowa. We were loading into the show and someone said – I think it was Chad Gilbert actually who came up to us because his side project, What’s Eating Gilbert, was on the tour. He said “I saw you, I saw you uh beat my band on the iTunes charts.” New Found Glory had put a live album that day, the same day as ours.

D: Their first live album. And

we beat them [NFG] on the charts so he was sour about it.

M: I’m telling you man, you guys are it!

D: And it was just unreal to see something like that happen. All the Billboard stuff; iTunes stuff. I try not to keep an eye on it too much just because you don’t want to get your head too big in a situation like that. But it was awesome. I was definitely taking peeks [at the charts] and wanted to see that kind of stuff and it was wild man. It was cool.

D: Thank you, thank you.

M: Yeah, you’re welcome. I love the new album by the way. It has such a really good feel to it.

M: So The Finer Things was produced by Steve Klein who used to be in New Found Glory. So, I gotta ask you: What do you think about his criminal charges of possessing child pornography and do you think it had any sort of impact on the band or anything like that?

D: We met Steve as Steve – a normal guy that was here to make our album as best as it could be. And that was one thing that he said when we were in the studio was like “I am not Steve from any band. I not in any band. I’m not Steve from New Found Glory. I’m not some rockstar guy or anything. I’m just a guy named Steve that thinks he can make your record the best way it can be.” And it was strictly business with him. He was just an extra set of eyes and ears in the studio. He would take our songs and – we would play our songs in the live room in the studio when we first got there – and he would just kinda stop us every once in a while and give advice on certain parts and structure of songs and things like that. I saw this question coming, definitely.

D: And it’s the first time I’ve been asked it and it’s different for me. But I guess I don’t have much of a comment on it, besides the fact that he was good to have in the studio for as far as dissecting our songs and making our record as good as it could be. And that’s all I really have to say.

M: Cool man. It sounds like from a professional standpoint, he was exactly what he needed to be.

[Steve was] exactly what he needed to be. It was such a surprise to us when we heard all that stuff.

D: To everyone. For sure. Still not sure what to think about it. It definitely didn’t make an impact on the band though.

M: Well good, good to hear. So, speaking of bands, what bands would you say that you really look up to in your genre right now?

D: New Found Glory is definitely up there. And the fact that we even got to be involved with them in any sort. And we did get to, after recording our album, head out on tour with them for a little bit. For a week long on the west coast which was insane; awesome shows to play as a support band. A lot of bands we’ve toured with actually are big bands that I would listen to growing up like Bayside, Motion City Soundtrack… Cartel is another one that we’ve toured with that’s a big one.

I grew up on bands like Fall Out Boy and The Starting Line which are still bands that I look up to today.

So yeah, mainly early pop punk bands that set the bar for bands like us to really keep the generation going for sure.

M: Cool. Well thank you. Are there any records that you’re stoked about right now?

D: Right now, not so much because we’ve been so busy. I feel like whenever I take out my laptop and look at my iTunes… I’m a big new music guy myself, but we’ve been so busy and I haven’t been home enough to even look at new records and things like that. I haven’t really branched out on new music and dove into what’s new right now other than around the time that our album came out. Because there were so many albums that came out the day that ours did in October. It was October 8th that ours came out. And I remember the anticipation for it was crazy because there was about 20 records that came out that day. That New Found Glory Live record came out. A Day To Remember had an album. Panic! At The Disco. Mayday Parade put out an album that day. There was so much. It was a super internet buzz day for music. And a lot of those albums I do like that we still listen to in the van like that A Day To Remember album [Common Courtesy] and things like that. But as far as new music, I plan to get home after this tour and find all the new records that I haven’t heard yet and make my next opinions. I’m excited though. Cause I’m a big new music guy.

D: I’m not a vinyl guy. Actually, if anything I’m more of a CD guy. I’ve been a CD collector since I was pretty little. I do that and mainly digital [music] cause I try to download as much music as I can all the time to have new music to listen to.

M: Alright. Thank you. So, you guys are going to Europe in May right?

D: Yeah, right after this tour.

M: Have you guys ever been there before?

D: We’ve never been. Only Tony, our guitarist, has been there in the past. The rest of have never been overseas anywhere for any reason. So it’s something that’s pretty special for us.

M: So are you guys stoked about playing live overseas?

D: Very stoked man. It’s cool because I already have some friends that I talk to a lot that are from overseas and we hear a lot of buzz on the internet through twitter and other social media that [fans] have been definitely waiting for us to get over there. So

to even hear that anyone is excited for us to play [Europe], with the bands that we’ve going over with, is going to be something special for sure. I’m really excited.

M: There’s definitely a building anticipation for you guys to get over there. So I can only imagine how excited you are.

M: So you guys have a heavy tour schedule through the rest of the year.

D: This is the busiest we’ve ever been. No doubt about it.

M: Awesome. Well, alright man. That’s all I got for you. So you can catch State Champs on tour with We Are The In Crowd through April 4th in the States. You can catch them all over Europe in May. And all summer long on the Warped Tour right?

D: Oh course, the Warped Tour is gonna be our next big push in the States after this tour.

So anybody listening right now, make sure you make out to Warped Tour and come find us and hang out! It’s gonna be a fun time.

M: Awesome. Are you guys on every single date?

D: Thanks everybody and thanks my man for having me. I appreciate it man. Thank you.

M: I caught up with Derek again after their set and asked him what he would be doing if he wasn’t playing and touring in a band.

D: I’m actually a graphic designer. I went to school for it. I design all of State Champ’s T-Shirts and some other merch. I also do merch design for a number of other bands for extra cash while on the road.