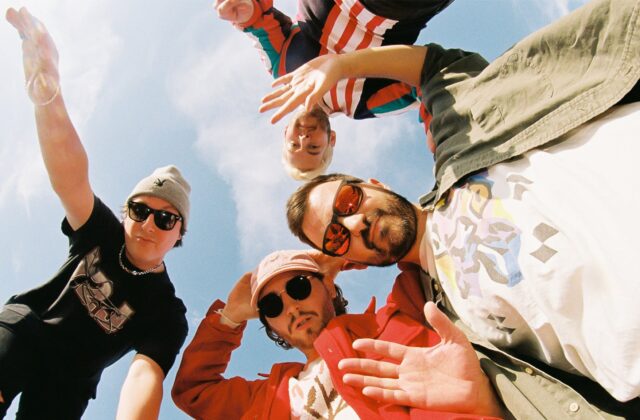 Over the past decade, Albany, New York’s State Champs have become a major player in the world of pop-punk, helping define the shape of the genre for a new generation of fans. Catch them in Orlando, FL at The Plaza Live on December 02, 2022 with special guests Hunny, Between You & Me, & Save Face! GET TICKETS HERE! Formed in 2010 by vocalist Derek DiScanio and guitarist Tyler Szalkowski, the pair began laying the foundation of State Champs in garages and basements throughout their hometown. The band’s lineup would shift a bit, but DiScanio and Szalkowski were always at the helm, crafting the band’s 2013 debut, The Finer Things, along with guitarist Tony “Rival” Diaz and drummer Evan Ambrosio. They’d add bassist Ryan Scott Graham the following year and, in 2015, they’d release Around The World And Back, a record that elevated State Champs to a frontrunner in the genre.

On this highly anticipated upcoming release, the band shares, “Kings of The New Age is our fourth album, the one that we spent the most time on, and the one that makes the biggest statement. After writing over 30 songs, we narrowed it down to 11 that best represent our mission as a band, and sonically, match the energy level we wanted to captivate heading into this new chapter.”

They continue: “Lyrically, KOTNA is a reflection on the past few years during a very weird time. However, it is also a reminder that we’re only here for so long. Although we will always live and learn by trial and error in areas like friendships, family, careers, relationships, etc, there’s no time for toxicity and negativity when a certain opportunity presents itself. Never waste a moment that can be seized. Times are changing, culture is evolving, and we’re happy to provide the soundtrack and let you know that we’re Here To Stay. Welcome to The New Age.“

Alongside the announcement, State Champs has unveiled a brand-new single + music video for “Everybody But You” featuring Ben Barlow of Neck Deep. The track has been released with a high-energy music video featuring cameos from long-time friends, including actor/singer Tyler Posey, Lil Aaron, The Story So Far’s Kelen Capener, and many more familiar faces, and throws viewers right into the middle of a house party with the band. “Lyrically, ‘Everybody But You’ reflects on the back and forth of an overly toxic relationship, and after all that exhaustion, what better way to move on from someone than throwing a massive party with your friends? We also were heavily involved with the creative side of the music video treatment and direction in which we had a lot of fun portraying the concept and message of the song (and partying.)”

Catch State Champs in Orlando, FL at The Plaza Live on December 02, 2022 with special guests Hunny, Between You & Me, & Save Face! GET TICKETS HERE!

We’ve teamed up with AEG Presents Southeast to give you a chance to WIN (2) TICKETS to see STATE CHAMPS at The Plaza Live on December 2nd!