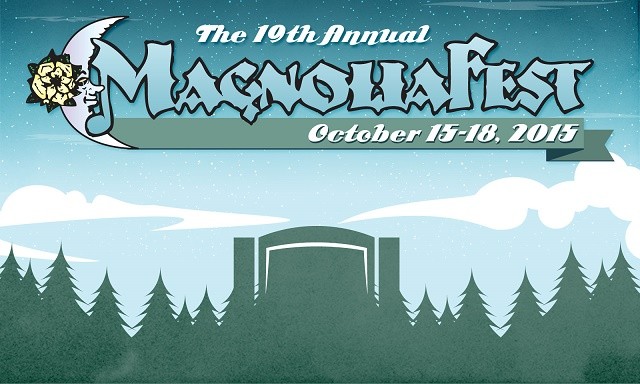 Sweet Magnolia: How To Navigate a Weekend Full of Incredible Music! | Magnolia Fest at Spirit of the Suwannee Music Park in Live Oak, FL | October 15-18, 2015

Magnolia Fest at Spirit of the Suwannee Music Park always has its share of headliners. This year it’s Tedeschi Trucks Band and The Avett Brothers. We will discuss them in a minute. But everyone in attendance is going to see them. Huge fans are already on their way to get down on it. This preview is going to give you a heads up on those decisions that you have to make; the scheduling conflicts that inevitably ‘plague’ music festivals full of talent.

This year’s Mag Fest lineup is outstanding. You really can’t go wrong and should try to see every band possible. But, it’s nice to have a heads up about which bands are not to be missed, and to have a little guidance in navigating the schedule.

Let’s look at it chronologically. Forget the headache. Just pull this up on your phone and start making decisions.

Thursday is always a tough call. It’s hard to take two days off of work, but those who can make it by 4:00ish are in for a treat. The Lee Boys, Band of Heathens, Jacksonville’s own Corbitt Brothers, and a late night performance by Lake Street Dive are the highlights of a very busy kickoff.

Band of Heathens plays an American Aquariumesque brand of Southern rock n’ roll. A dash of The Band seeps into their soulful country-fried tunes. Band of Heathens gives you more than just scoring a good camping spot as a reason for getting to Suwannee early.

Jacksonville’s Parker Urban Band has a quick set on the Porch Stage, bringing a nice bit of smooth soul as the bridge between Band of Heathens and The Congress.

A funky soul band with expert harmonies? The Congress brings a feel good approach a la Bright Light Social Hour through four expert musicians playing songs of love and the road. Maybe we will take that Thursday off after all. Opening day is shaping up to be worth the price of admission without any mention of The Avetts or Susan Tedeschi. The Congress may end up being your festival crush.

Another local North Florida favorite brings blistering harmonica and a ridiculously high-energy live show to The Porch. The Corbitts play a rockin’ brand of Southern folk that gets the crowd barefoot and dancing. Isaac Corbitt’s harmonica playing must be seen.

You could take a nap to prepare for Lake Street Dive at midnight, but The Motet’s funk and Nikki Talley’s Americana may have something to say about that. By now you will probably have worked up a good buzz. Just maintain and enjoy pieces of each show.

Mag Fest has scheduled a treat at midnight. Talented enough to headline their own festival, Lake Street Dive has established themselves as a must-see anytime they come around. Their show at The Social in Orlando last November was feel good party. There should be just enough good people at Mag Fest Thursday night to make their set intimate yet high energy. Get there.

The convenient linear lineup of Thursday gives way to the inevitable scheduling conflicts of a festival weekend on Friday. Fortunately, Magnolia Fest makes it so that you really can’t miss.

If you went too hard the night before, or are just enjoying grilling some sausage around the drum circle, The Lee Boys would be a good way to start your day. Funk and gospel played with pedal steel? Perfectly slotted at 2:00 in the afternoon. The first semblance of a buzz should be creeping in, and going to funky church is the right accent to Friday afternoon.

The Corbitt Brothers are up next if you missed them Thursday, and their set is on the inimitable Porch Stage where so many festival stealing performances are launched.

Cajun soul food is on tap in the amphitheater at 4:00. The Lost Bayou Ramblers sound unlike anyone else out there. Haunting gospel organ, Cajun fiddle and accordion, cool enough that Scarlett Johansson and Dr. John are featured in the video below. Cedell Davis plays the blues at the same time. Cedell is incredible in his own right, and will take you to school for that hour. Still, we are not missing this. The Ramblers are gonna be hard to beat in this slot.

Col. Bruce Hampton and Habanero Honeys are weaved in between sets until…

The first full-on, what-the-hell-should-I-do scheduling conflict of the weekend shows up at 6:00. The Del McCoury Band is quite possibly the best touring bluegrass band on the planet, but Steep Canyon Rangers, veterans of Spirit of the Suwannee (and often backup band for Steve Martin), are damn good as well. The former is on the Meadow Stage, with the latter in the gorgeous, shady Amphitheatre, so venue may end up the deciding factor. Again, tough decision that you can’t miss on.

Lenny Kravitz-esque blues. I tried to avoid using that as a comparison because it is so obvious. But lead singer/guitarist Tash Neal bears a striking resemblance to, and sounds a lot like, Kravitz. Like Lenny but bluesier, grittier. The London Souls are a three piece outfit from New York. If The Lee Boys, or The Congress, or Lost Bayou Ramblers don’t steal the show, The London Souls will be the ones that leave everyone buzzing around the merch table. Their set overlaps with another incredible billing.

Here’s another nice problem to have. Doyle Bramhall II is going to be setting the Meadow Stage ablaze with slide guitar while The London Souls are over on the Porch. Bramhall II has been known to bring two drummers and a bass player to compliment his scorching licks. And, dude’s praises have been sung by the likes of Eric Clapton. It’s a sound well suited for the Meadow Stage. Regardless of who you choose to see during this time slot, hustle over to the Music Hall at the end of the set. The Congress is playing again.

Love between two amazingly talented musicians is a powerful thing. Derek Trucks and Susan Tedeschi were accomplished rock n’ roll musicians in their own right before the married couple decided to start a band. Trucks is one of the most talented guitarists around. His brand of Southern Blues is part The Allman Brothers, part Gov’t Mule. But when Tedeschi and Trucks form like Voltron, the result is sometimes funky, sometimes bluesy, and always soulfully incredible.

Jacksonville’s wonderful folk duo just got back from a national tour on which they frequented our National Parks while playing venues across the country. If you haven’t seen Brad Lauretti and Sadie Frederick live, make their noon set a priority. There is so much to love about the pair’s live show. Brad’s atmospheric vocals convey tunes about love and politics that owe as much to Dylan as they do Neil Young. Sadie provides harmony with her gorgeous voice and outstanding fiddle. This Frontier Needs Heroes is a Shows I Go To favorite that is not to be missed.

Steve Pruett’s Back from the Brink and Bryce Alastair Band are also playing a morning set.

Berry Oakley’s Skylab will be a good act to enjoy from a hammock until Jacksonville’s Wetherman lights up the porch stage.

Whetherman (3:00) plays a brand of folk that is influenced by island music, singer-songwriting, and myriad other genres. He’s great with just a guitar at a bar, but with a full band including backup vocals, Whetherman is a festival favorite. I first caught him at the Green Turtle Tavern in Fernandina Beach in about 2010. He was playing his ass off, sweating and hustling for hours. It seemed like my party were the only people paying attention, but that mattered little to Whetherman. He clearly loves playing music and that feeling has come across in the live show.

We take it back, skip Steep Canyon Rangers on Friday. Go see Del McCoury Band and then catch the Rangers after Whetherman. Col. Bruce Hampton is also playing at that time, as is the man who penned Widespread Panic’s Climb to Safety, Jerry Joseph, with his Jackmorons. Once again, you can’t miss.

Slide over to the Music Hall to catch another nice change of pace.

The Rebirth billing certainly stands out among mostly folk and bluegrass influenced bands, but seeing Rebirth is the kind of experience that make sense anywhere. Quality is instantly recognizable, and New Orleans’s Rebirth has few peers when it comes to second line-style music. This is a perfect change of pace.

Pick your poison between 7:15 and 8:45. Grandpa’s Cough Medicine was the talk of Suwannee Springfest 2015. Jeff Austin is the guy who formerly played mandolin for Yonder Mountain String Band. And Jim Lauderdale is one of the great songwriters of our time. You can’t miss here.

Whichever you choose, New Orleans Suspects will be getting funky in the Amphitheater before The Avett Brothers take on the Meadow Stage. The Avett Brothers are as much fun as live music gets. Their show is an immersive, family-like experience. This despite the fact that they have made quite the name for themselves over the last ten years. They play a brand of folk rock that fuses genres and forges relationships. From cult following to household name, the Avetts have remained true to their fans above all else. We don’t miss them anytime they come to Florida. Make sure you are awake and alert for this one.

If you can hang, stay up for Donna the Buffalo. Folks make special trips to Suwannee just to see Donna. The Avetts will do their best to wear you out, but Donna is worth stumbling over to the amphitheater to see on your way to the campsite.

Sunday is mostly full of repeat performances from festival favorites including Donna the Buffalo ending the weekend at 6:30. The whole day is worthwhile if you don’t have to get back for work on Monday. Big Cosmo followed by Grandpa’s Cough Medicine, Jim Lauderdale, and Keller Williams’ Grateful Gospel. Keller is special, and you can bet that Brett from Grandpa’s Cough Medicine is going to get involved with that jam.

If the experience was set in a downtown park it would be as good as anything you could ask for. The fact that Spirit of the Suwannee Music Park is one of the more incredible places on the planet makes it potential life altering. Suwannee is an environment where class and race and sexuality melt away. It is impossibly beautiful, monumentally kind, and an absolute blast. You are as likely to see a seventy year old man dancing his heart out as you are a three year old doing her best to shake it while playing in the mud.

This year’s Magnolia Festival does not have a single hole in its lineup; and there are few places that consistently book well balanced lineups season after season, and year after year. It proves to be a first rate experience like always, with a diverse lineup of brilliant musicians. Stay tuned to ShowsIGoTo.com, and on Twitter and Facebook, for continued coverage of the weekend.

How To Navigate Magnolia Fest 2015 by Jason Earle.