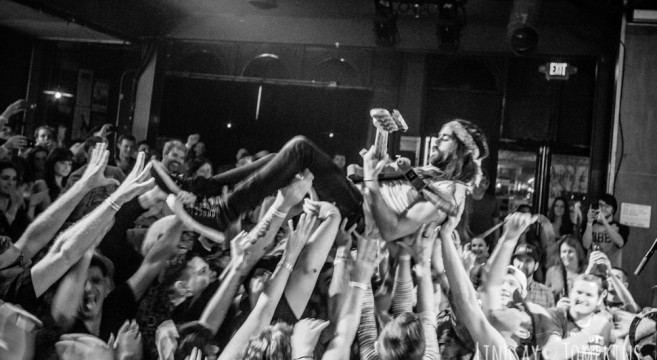 No one ever sets out to fall in love. It just happens. You meet through a mutual friend, or at a church function, or a bar, and your existence shifts. Priorities change. Conversations take a different tone. You are the same person, but your reality is oh-so-different. The Bright Light Social Hour delivered a performance indicative of that same existential shift at The Social last Friday night.

The loving theme was set well before The Bright Light Social Hour took the stage. A guy who looks like a scaled down version of WWE’s The Big Show embraced bassist and lead vocalist Jack O’Brien as if O’Brien was a long lost friend from college. The kind of friend with whom you have a lifelong connection. They held each other blissfully, as if they were the only two people in the world and all would be right if they just maintained this state.

Meanwhile, Austin-based opener Migrant Kids were delivering an ethereal jam that slowly started to win over the still settling crowd. It was a show-defining moment. When Bright Light Social Hour took their turn at winning over the now eager mass, that theme of universal love dominated the evening.

The opening tune was the kind usually reserved for the end of a set–an extended jam with a groove that carried the song to a climactic slide guitar solo. That guitar, played by Curtis Roush, moaned gleefully all night, smooth and beautiful like a willow tree dancing a rumba. And we all fell in love.

The Bright Light Social Hour seemed at home in downtown Orlando, and alluded to their love of the Sunshine State more than once. O’Brien, who casts a punk rock Scott Avett presence on stage, delivered a constant focus and meaningful energy throughout the set. Not manufactured, obligatory energy, but genuine euphoric love.

He and the rest of the band were clearly enamored with the music they were playing, the vibe in the room, and the devotion of the crowd. We were on a journey together. All carried by O’Brien’s bass line, through the synthesizer and keys, up against the drums, and crossing the finish line with that gorgeous slide guitar.

The Bright Light Social Hour has had a following in Central Florida for some time. Hell, a picture of O’Brien crowd surfing has been the cover photo on the Shows I Go To Facebook page for almost two years! And, that presence grew dramatically Friday night. This was a show for the ages, with each person in attendance feeling like we had witnessed something transcendentally special.

“We’re all alone together, and that makes a fucking difference.”

Said O’Brien toward the end of the night. There was a tidal wave of positivity in the room. As the band went into the encore–a beautiful song that felt like “Purple Rain”–O’Brien implored us to take that feeling of connectedness, the kind forged by love of really great music, and use it out in the world. We have those moments of escapism at a show, but why does it have to stay there?

Some in attendance fell in love with The Bright Light Social Hour for the first time, some over and over again. Why not fall in love over and over again outside the bounds of your favorite live music venue? The Bright Light Social Hour is doing their part to perpetuate love and positivity. We can do our part to take that with us.