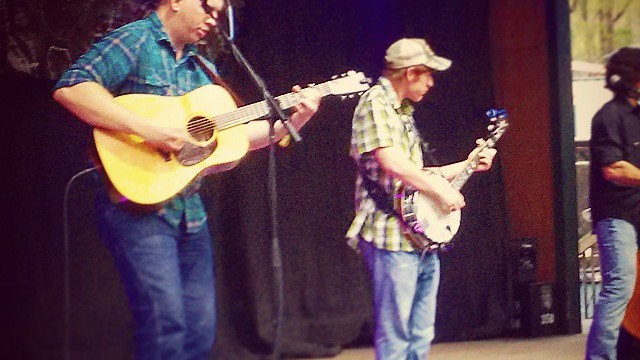 “Blood and Justice,” was the second tune that Jacksonville-based Outlaw Bluegrass Band, Grandpa’s Cough Medicine, played during their first of two sets at Suwannee Springfest 2015. It’s a tale penned by bandleader/guitarist Brett Bass where the narrator goes door to door on a vigilante killing spree, wiping out pedophiles as Bass murders the strings of his guitar.

Bass sat down with Shows I Go To between that first electrifying set and the band’s festival-defining performance the next day. We discussed the creative process, the difference between bar gigs and major festivals, and why you will not find any Bob Dylan albums in his collection.

“This is one of the few times a year where we are not doing bar gigs,” Bass said. “We’re doing an actual festival where people care, and are there to see music specifically, not just there to drink beer.”


“Sometimes you don’t get [energy] back. That’s when it starts to feel like work. You’re in a bar and no one’s listening and you’re playing your ass off and you get crickets after you finish a song like no one gives a shit.”

No one giving a shit seems like an impossible condition to anyone who has seen Grandpa’s Cough Medicine (GCM) play live. They inspire a devotion akin to those who worship Phish–an almost cult-like following of people who are aggressively passionate about their music. The difference, of course, is that Phish sells out national tours while Grandpa’s Cough Medicine plays almost exclusively in North Florida (by choice).

Which made me wonder whether a national tour for some broader exposure would be a prudent move for GCM. Their stuff is brilliant–Bass’ expert guitar picking in the vein of Doc Watson, virtuoso banjo play from Mike Coker, and bass that impresses (no small feat) by Jon Murphy who’s also an excellent songwriter (and shares singing duty with Bass).

People all over the country need to hear this music. Yet, when asked about the possibility of taking GCM on a national tour, Bass was clear in his answer.

“I’m not doing this so I can be poor as hell. While I’m willing to suffer for my art; I’m not willing to starve for it. Every extended tour I’ve done has been a monetary failure if I’m being honest.”

I get that. But Brett Bass has not seen it from my perspective. The fervent nature of the audience at Springfest. The energy started as a few die-hard fans singing along with GCM’s straightforward tales of drinking and sex and sniping Westboro Baptist Church members. Then, spiraling upward to a roaring climaxed mass of sweaty, smiling, mesmerized beings, stumbling from the auxiliary Porch Stage to the main amphitheatre to see the legendary John Hiatt perform.

Many who were part of that contented mass had left The Wood Brothers’ unfinished set as the sky opened up and the rain came down, seeking shelter in the Spirit of the Suwannee General Store or the Music Hall where other acts were performing. The downpour lessened to a drizzle as GCM started their second stint of the weekend to a sizable crowd that built with the energy of the set like blood pressure rising at the possibility of first-time coitus.

The crescendo of the hour-long performance was a collaborative explosion that started with a Latin-inspired jam with one guest mandolin player (Fil Pate), and spilled into euphoria when that treat was doubled to include two mandolins (Bobby Miller), and Bass encouraging everyone on stage to pick up the tempo.

When they finished we all flooded out, dumbfounded, toward the Amphitheatre Stage where GCM had initially blown all of our minds twenty four hours earlier, and Hiatt had already begun to play to a relatively sparse crowd.

This band from Jacksonville, that demand confines to playing in North Florida, caused people to leave the hot-right-now Wood Brothers early and stay to listen to a barn-burning instrumental jam session after John Fucking Hiatt had already started playing a couple hundred feet away. It seems unreal that these guys do not have a national following.

I asked Brett Bass how they strike the balance between staying true to their art and making the money that he and I agree they deserve.

“For me, striking the balance has been keeping us closer to home instead of trying to play all across the country where no one knows who the hell we are. It seems like trying to play rockstar. It’s like saying, ‘We’re going on a national tour.’ – when it really means that we’re playing shitty bar gigs in bumfuck Tennessee somewhere.”

How does a band like GCM create such powerful music–the kind of stuff that deserves to be enjoyed in the right setting?

Bass said that each member of GCM does their own thing creatively, and then they meld those creations during band practice. So where does Brett write his outstanding contributions?

“I don’t put a lot of effort into writing. I don’t sit down and say ‘I’m gonna write a song today’. If I think of something that’s clever, I’ll stop what I’m doing and sit down and try to flesh it out. When something strikes me as a clever idea, I’ll at least try to write it down and put it somewhere so I can explore it a month later.”

“But I take more pride in my musicianship than my songwriting,” says Bass.

“If I’m going to be known for anything I want it to be shit that I wrote.”

“You won’t find a Bob Dylan or Neil Young CD in my collection. I look forward to seeing people like the McCoury’s or Larry Keel play their instruments.”

This author’s guess is that the McCoury’s and the Keels feel the same about Brett, Mikey, and Jon. Hopefully Grandpa’s Cough Medicine gains the financial stability and national notoriety that they so deserve, and soon. Until then, Floridians are among the fortunate who can see them perform regularly here in our tropical paradise. Brilliantly played, honest songs from dudes who clearly love what they do–that’s what we can look forward to.