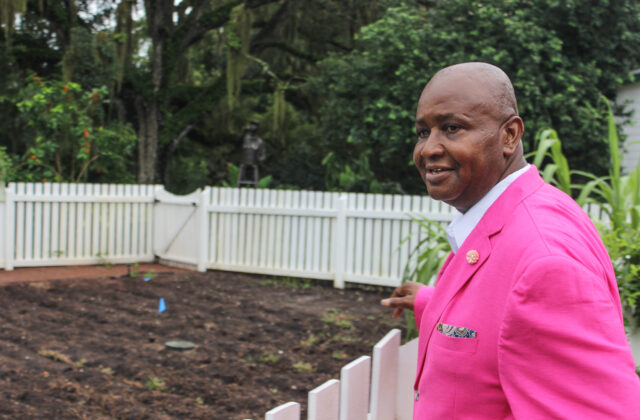 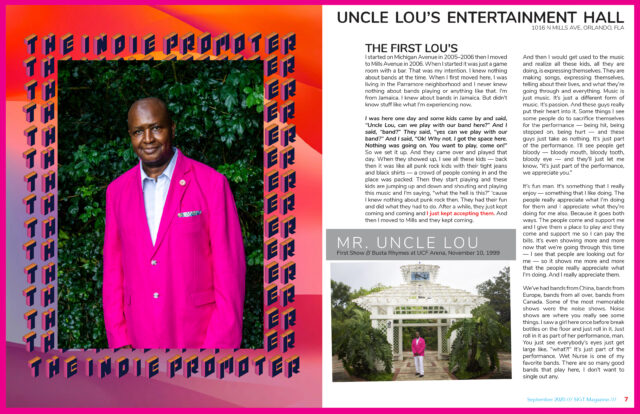 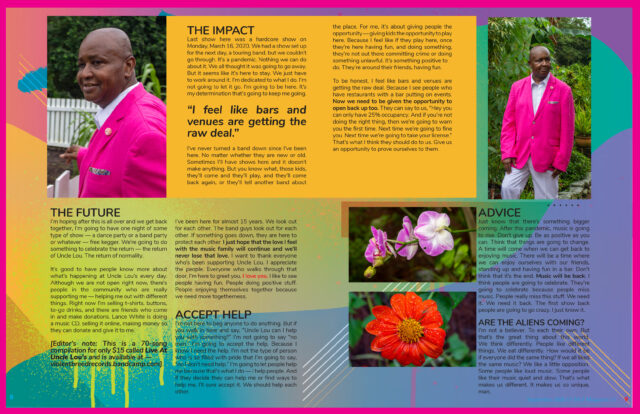 I started on Michigan Avenue in 2005–2006 then I moved to Mills Avenue in 2006. When I started it was just a game room with a bar. That was my intention. I knew nothing about bands at the time. When I first moved here, I was living in the Parramore neighborhood and I never knew nothing about bands playing or anything like that. I’m from Jamaica. I knew about bands in Jamaica. But didn’t know stuff like what I’m experiencing now. I was here one day and some kids came by and said, “Uncle Lou, can we play with our band here?” And I said, “band?” They said, “yes can we play with our band?” And I said, “Ok! Why not. I got the space here. Nothing was going on. You want to play, come on!”

So we set it up. And they came over and played that day. When they showed up, I see all these kids — back then it was like all punk rock kids with their tight jeans and black shirts — a crowd of people coming in and the place was packed. Then they start playing and these kids are jumping up and down and shouting and playing this music and I’m saying, “what the hell is this?” ‘cause I knew nothing about punk rock then. They had their fun and did what they had to do. After a while, they just kept coming and coming and I just kept accepting them. And then I moved to Mills and they kept coming. 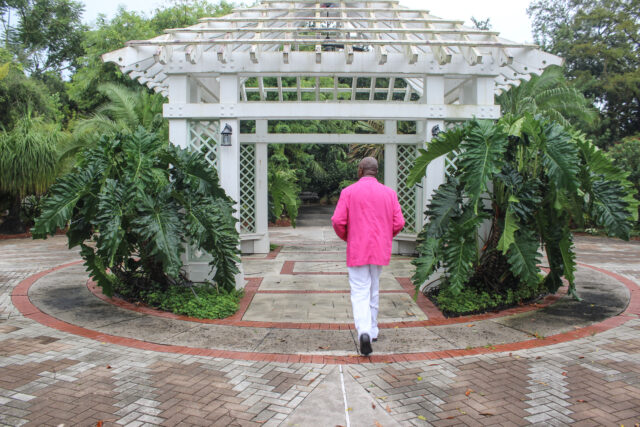 And then I would get used to the music and realize all these kids, all they are doing, is expressing themselves. They are making songs, expressing themselves, telling about their lives, and what they’re going through and everything. Music is just music. It’s just a different form of music. It’s passion. And these guys really put their heart into it. Some things I see some people do to sacrifice themselves for the performance — being hit, being stepped on, being hurt — and these guys just take as nothing. It’s just part of the performance. I’ll see people get bloody — bloody mouth, bloody tooth, bloody eye — and they’ll just let me know, “it’s just part of the performance, we appreciate you.” 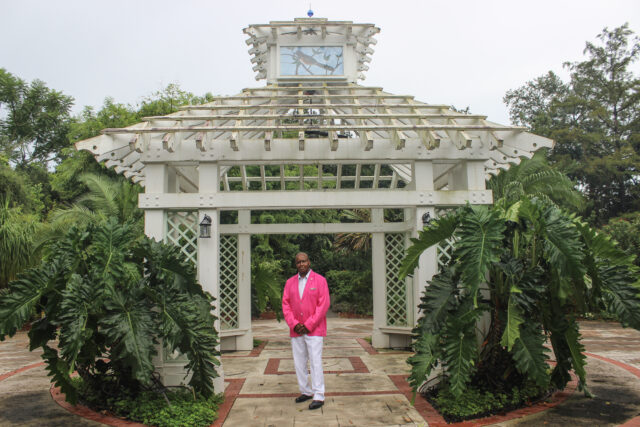 We’ve had bands from China, bands from Europe, bands from all over, bands from Canada. Some of the most memorable shows were the noise shows. Noise shows are where you really see some things. I saw a girl here once before break bottles on the floor and just roll in it. Just roll in it as part of her performance, man. You just see everybody’s eyes just get large like, “what?!” It’s just part of the performance. Wet Nurse is one of my favorite bands. There are so many good bands that play here, I don’t want to single out any.

I remember when I would bartend I used to put on big headphones and people thought I was listening to something else at the time. But I wasn’t listening to something else, I was just trying to block a little of the noise out instead of putting earplugs in, because I didn’t know nothing about earplugs. So I’m using my big headphones to keep the noise out. It’s so funny how many people tell me about it all the time and say, “I remember you used to wear the big headphones.”

Last show here was a hardcore show on Monday, March 16, 2020. We had a show set up for the next day, a touring band, but we couldn’t go through. It’s a pandemic. Nothing we can do about it. We all thought it was going to go away. But it seems like it’s here to stay. We just have to work around it. I’m dedicated to what I do. I’m not going to let it go. I’m going to be here. It’s my determination that’s going to keep me going.

I’ve never turned a band down since I’ve been here. No matter whether they are new or old. Sometimes I’ll have shows here and it doesn’t make anything. But you know what, those kids, they’ll come and they’ll play, and they’ll come back again, or they’ll tell another band about the place. For me, it’s about giving people the opportunity — giving kids the opportunity to play here. Because I feel like if they play here, once they’re here having fun, and doing something, they’re not out there committing crime or doing something unlawful. It’s something positive to do. They’re around their friends, having fun. 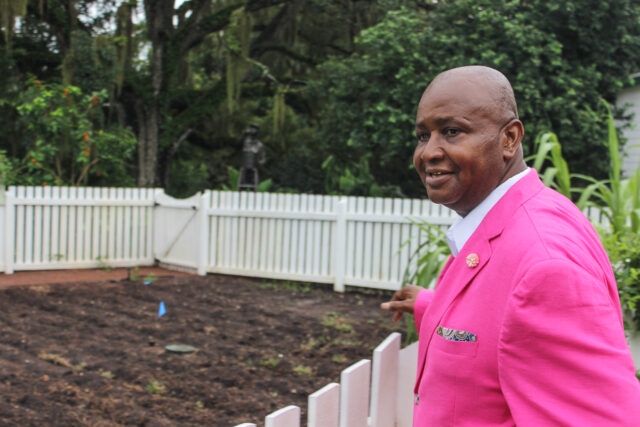 To be honest, I feel like bars and venues are getting the raw deal. Because I see people who have restaurants with a bar putting on events. Now we need to be given the opportunity to open back up too. They can say to us, “Hey you can only have 25% occupancy. And if you’re not doing the right thing, then we’re going to warn you the first time. Next time we’re going to fine you. Next time we’re going to take your license.” That’s what I think they should do to us. Give us an opportunity to prove ourselves to them.

I’m hoping after this is all over and we get back together, I’m going to have one night of some type of show — a dance party or a band party or whatever — free kegger. We’re going to do something to celebrate the return — the return of Uncle Lou. The return of normality.

It’s good to have people know more about what’s happening at Uncle Lou’s every day. Although we are not open right now, there’s people in the community who are really supporting me — helping me out with different things. Right now I’m selling t-shirts, buttons, to-go drinks, and there are friends who come in and make donations. Lance White is doing a music CD, selling it online, making money so they can donate and give it to me. [Editor’s note: This is a 70-song compilation for only $15 called ‘Live At Uncle Lou’s’ and is available at violentbreedrecords.bandcamp.com].

I want to thank everyone who’s been supporting Uncle Lou. I appreciate the people. Everyone who walks through that door. I’m here to greet you. I love you. I like to see people having fun. People doing positive stuff. People enjoying themselves together because we need more togetherness. 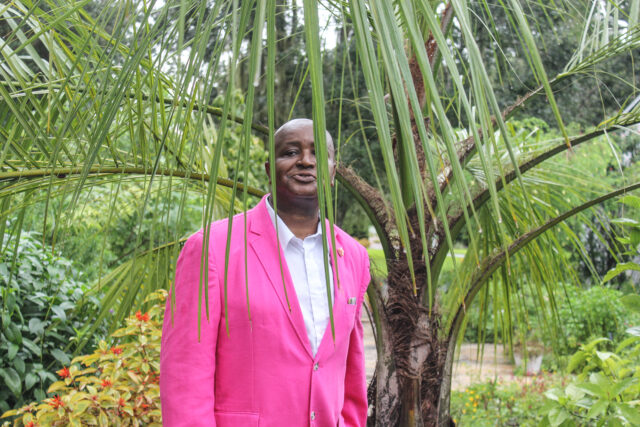 I’m not here to beg anyone to do anything. But if you walk in here and say, “Uncle Lou can I help you with something?” I’m not going to say “no man.” I’m going to accept the help. Because I know I need the help. I’m not the type of person who is so filled with pride that I’m going to say, “no I don’t need help.” I’m going to let people help me because that’s what I do — I help people. And if they decide they can help me or find ways to help me, I’ll sure accept it. We should help each other. 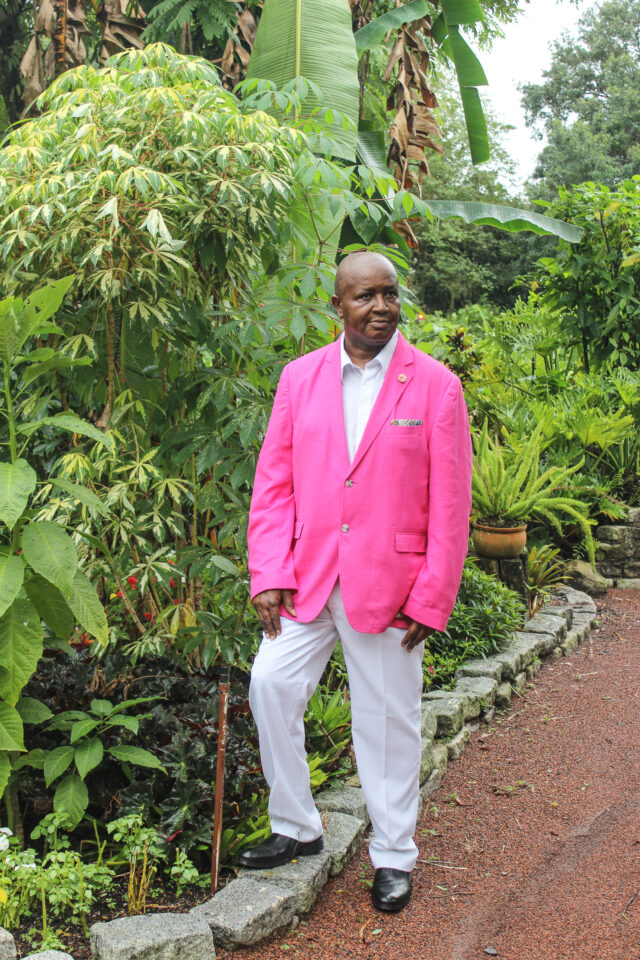 Just know that there’s something bigger coming. After this pandemic, music is going to rise. Don’t give up. Be as positive as you can. Think that things are going to change. A time will come when we can get back to enjoying music. There will be a time where we can enjoy ourselves with our friends, standing up and having fun in a bar. Don’t think that it’s the end. Music will be back. I think people are going to celebrate. They’re going to celebrate because people miss music. People really miss this stuff. We need it. We need it back. The first show back people are going to go crazy. I just know it. 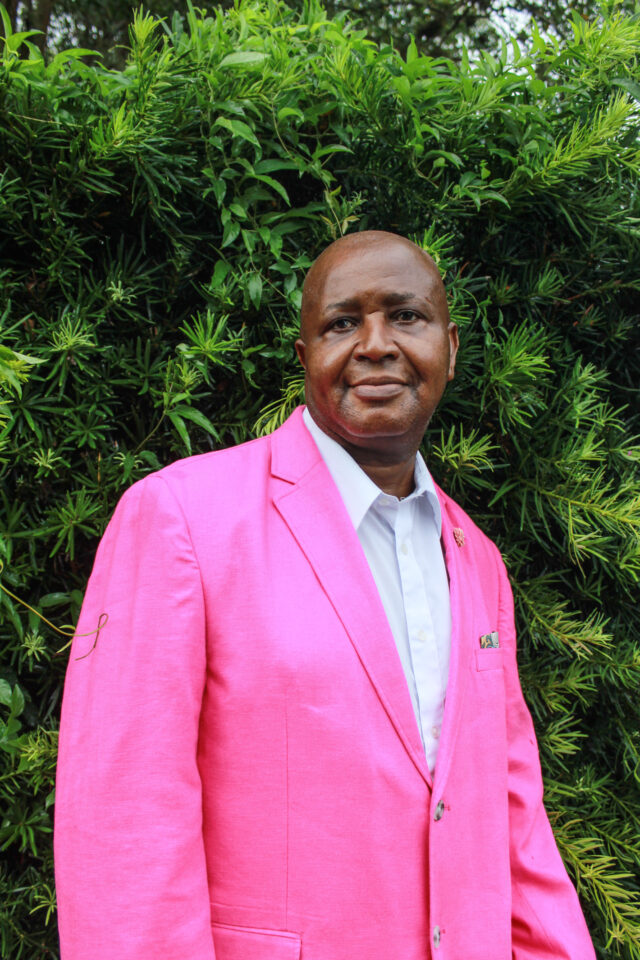 Get the full interview (w/exclusive audio and ALL the photos) with the magazine.