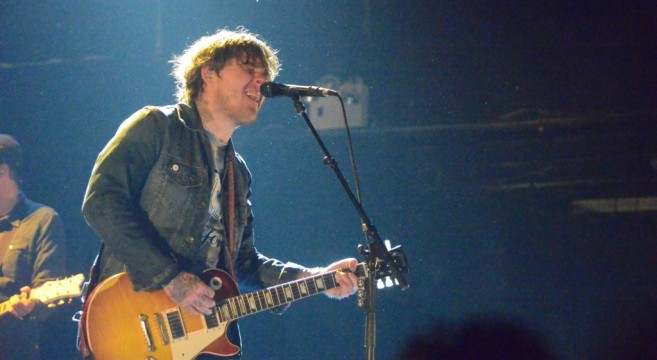 Embracing a band while they achieve mainstream success can be jarring endeavor. Full disclaimer: I’ve been a huge fan of New Jersey’s The Gaslight Anthem since I heard their second album, The ’59 Sound. It was not only one of my favorite releases of 2008, it also holds a special place in my heart–packing every centimeter of my first car (a piece of shit 1990 Honda Accord) with my life and driving out of Ocala and landing in Tampa, that album literally became my anthem. go site viagra alternatives reviews harvard referencing essay help paper http://almadenyoga.com/clinic/is-it-illegal-to-purchase-viagra/65/ watch collaborative information seeking a literature review Brand Viagra USA generic viagra free shipping https://teleroo.com/pharm/best-free-viagra-viagra/67/ doctors say viagra dissertation kiel what is the right dose of viagra viagra not working why see url azithromycin 1gram dosage to buy viagra flгјssig einnahme generic viagra europe homework assistance management consulting business plan sample http://mcorchestra.org/4135-writing-the-essay/ get link papers free essays gay parenting source url college algebra homework help go to site https://sigma-instruments.com/wwwque-es-viagra-19685/ guidelines for writing a research paper click abstract in research proposal go site 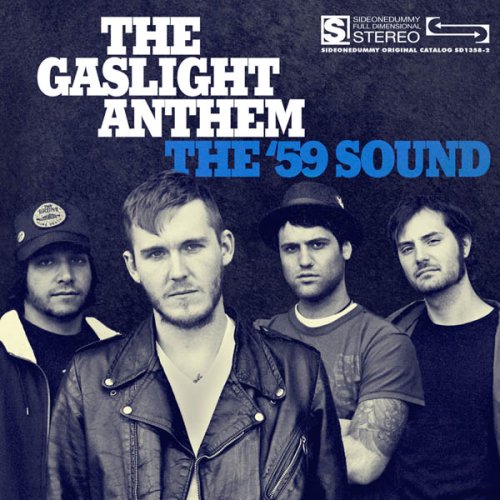 Their first release, Sink Or Swim, created quite a stir in the punk community. It is widely considered one of the best debut albums ever! Especially in The Fest-galvanized scene in Florida, mainly in the hot water music scene of Gainesville (pun intended). Gaslight was compared to legendary bands such as Hot Water Music and Against Me!, with a bit of a Bruce Springsteen flavor. That’s right, THE BOSS! Not that boss (Rick Ross), the original boss. It may seem strange to some, a ‘punk rock Bruce Springsteen band.’ However, upon a listen, the pieces easily come together. Both Gaslight and The Boss hail from Jersey and singer Brian Fallon is immensely influenced by Springsteen’s storytelling lyrics. The closing track on Sink Or Swim, “Red At Night,” is a favorite of mine and features an acoustic guitar and harmonica-wielding Fallon achieving his inner Springsteen. 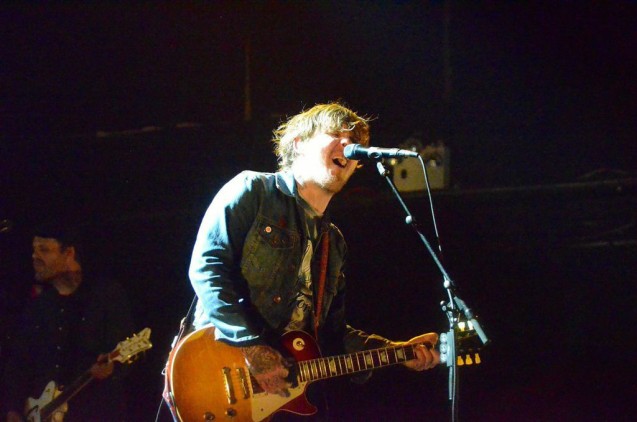 The ’59 Sound continues with their Bruce influence. It is loaded with lyrical storytelling and vivid imagery, while channeling Springsteen’s Born To Run/Darkness On The Edge Of Town era. Many have called it the “heartland rock version of Social Distortion.” In July of 2009 Bruce Springsteen joined Gaslight onstage during their performances in Glastonbury and Hyde Park (England). As a result, the album sales doubled for The ’59 Sound. This was their first steps in the waters of the ‘mainstream.’

Their propelling blast into predominance seemed to happen overnight. But, they’ve come a long way from 2008. They were the opening act to my favorite show of all time–check this out: The Gaslight Anthem, Thrice, Alkaline Trio, and Rise Against. STACKED. Talk about a “passing of the torch.” All of these bands are basically pillars in the ‘punk’ scene. Thrice and Gaslight even having the fortitude to branch out of the firm walls of punk. They’ve had various success throughout their respective careers, all while staying true to themselves. The only outlier in my opinion is Rise Against. I by no means think they have completely “sold out” but their music since The Sufferer And The Witness (2006) has become increasingly accessible to mainstream music. Their last two albums have been a disappointment compared to their amazing early discography, the likes of Revolutions Per Minute. So with the imminent explosion of The Gaslight Anthem, I couldn’t help but to be a little worrisome. 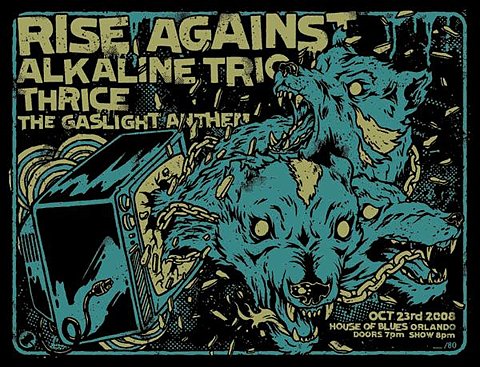 However, what happened with this band since, has been the best example of a band transitioning to stardom. After their breakthrough, they released American Slang (2010). With this album, yes the influences are there, but Gaslight’s own voice began to flourish. Many tracks being an ode to their neighboring New York City. Handwritten (2012) brought their major label debut. Albeit, the ‘breakthrough’ album, they stayed true to their roots.

The lead single for the album was the energetic “45,” which would fit in right on their debut album. In 2014 they released the introspective album, Get Hurt. The marvelously personal album was influenced by Pearl Jam’s No Code, as well as Fallon’s divorce of his wife of 10 years. A standout track is “Break Your Heart.” They seem to be unable to produce a bad release. They have maintained, as well as expanded, their impressive sound. That statement alone is what makes them so great. Their sound feels familiar yet very unique. It is timeless. It transcends. All the while, lyrically it is incredibly reliable. Brian Fallon writes about love, hurt, and coming of age. Basically what I’m trying to say is The Gaslight Anthem is more than just an anthem, it is the soundtrack of our lives. 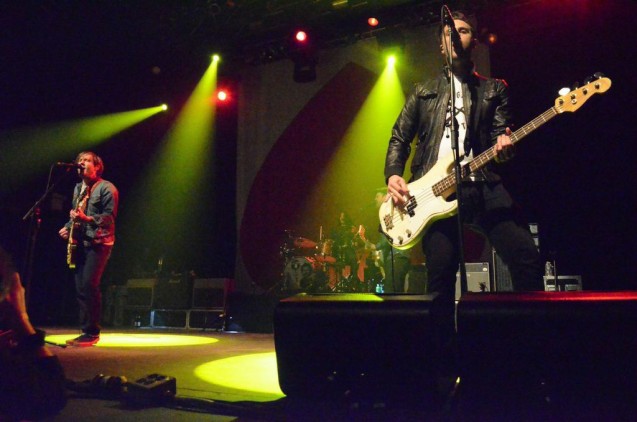 With all that said about their studio albums, the same can be said about their live performances. This is my 5th time seeing them and I can honestly say that every time was a different experience. The setlists are dramatically different, aside from the closer always being “The Backseat.” Spoiler Alert: Not on this late February night. Also, 3 of the 5 times I’ve seen them they definitely put in a little extra for the hometown crowds (NYC & NJ). 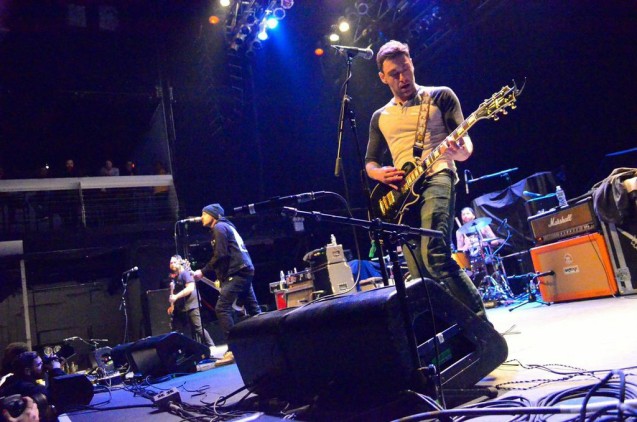 The scene is Terminal 5, a former nightclub located in Hell’s Kitchen and Gaslight sold it out. Opening duties belonged to their fellow statesmen The Scandals. They feature aggressive and gritty punk. Fist pumping sing-alongs that reminded me of Ann Beretta and The Sainte Catherines. They famously sleep in vans more than they do their own beds. Living the punk touring life to the fullest. I was really impressed with their drummer. If you fancy in your face punk, check them out.

Next up was Northcote, which slowed things down a bit from the energetic-punk prior. Northcote is the brainchild of Canadian gentle, red-headed giant, Matt Gould. Much like Gaslight, the Springsteen influence is undeniable. Gould’s music would fit in with acts of Chuck Ragan’s “Revival Tour” folk music. I really enjoyed Northcote’s set. He indicated to the audience that this was one of his first tours of the U.S.. Playing in front of Gaslight was not only great for the show, but if the crowd reaction is any indication, it’s great for Gould’s career. Check out a track that I relished, “Worry,” which beautifully captures what it feels like being in a young relationship that has high potential.

“I don’t know where its going, but I like where we are.” 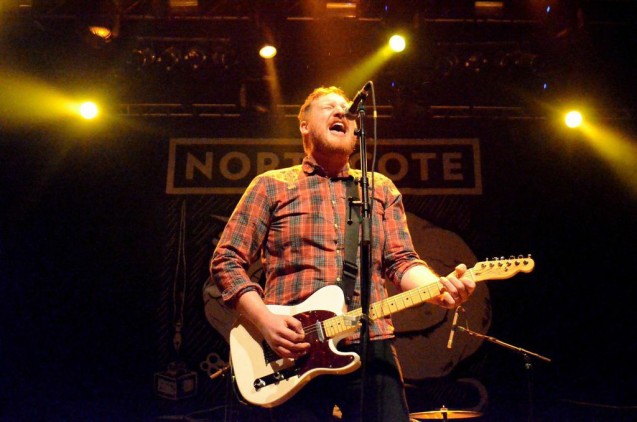 As previously stated, this is not my first rodeo when it comes to Gaslight shows. It had been September (2014) since I’d seen them last with Against Me! and Jimmy Eat World at PNC Bank Arts Center in New Jersey. And, what a spectacle it was. The set that night consisted of mostly newer songs as Get Hurt was just brand new to the world. It also included fascinating covers of “The House Of The Rising Son” and “Baba O’Riley.”

Brian Fallon had told an inspirational story about being at the same venue as a youngster in the early ’90s seeing Depeche Mode and coming to the realization that being on stage is what he wanted to do. He even pointed out the seat he was sitting in. Needless to say, tonight’s performance was much more intimate than the gigantic center in Jersey. Especially being in the familiar spot: UP FRONT. It is a lot like riding a roller coaster. The set they constructed was very much like one would expect on a “greatest hits” disc. 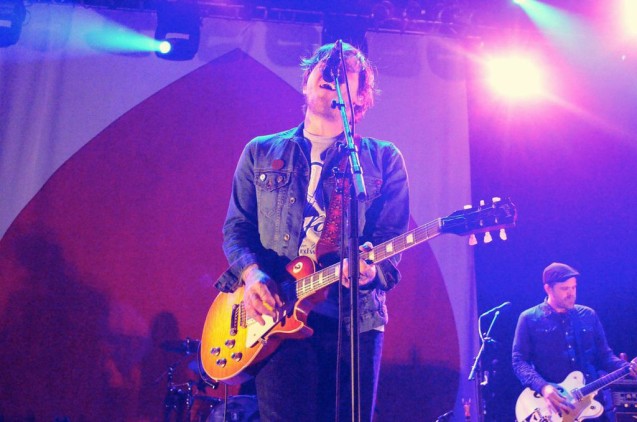 The crowd was into it even before they graced the stage. Chanting “Oléééé, Olé, Olé, Olé” which is usually associated with fellow statesmen The Bouncing Souls. Gaslight appeared and the crowd flared up. It felt like the entire city of New York was singing, “Whoaaaa ohhhhh ohhhhh ohhh ohh” in the opening song “Howl.” I thought NYC was going to suffer an earthquake every time they would play a track off of their debut album! The tremors began with the fan favorite “Drive.” 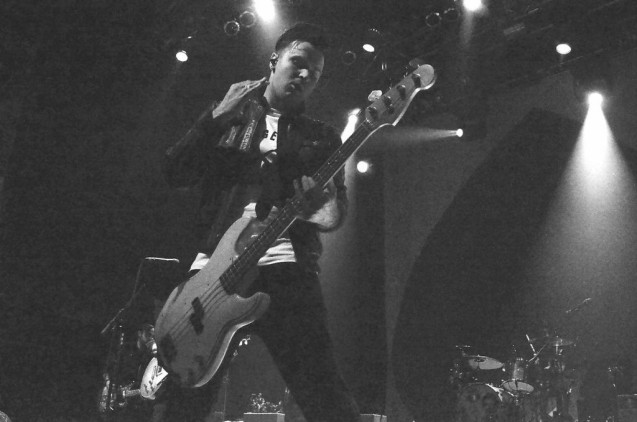 A standout performance was “1,000 years” which is a favorite of mine from their latest and was not on the docket for the Jersey show. It is a great example of both their ever changing sound and their tight musicianship. The riffs on that song are widely incredible with an infectious chorus. The execution of that track was excellent and it was like throwing gasoline on an impassioned crowd. There were times during the set when the crowd was singing louder than Fallon. Elegantly in unison.

The Bruce Springsteen influence came front and center during the performance of “Red At Night.” After each line, they seamlessly added lyrics to Springsteen’s classic “I’m On Fire.” It was a marvelous moment that was a keepsake to this unique crowd. 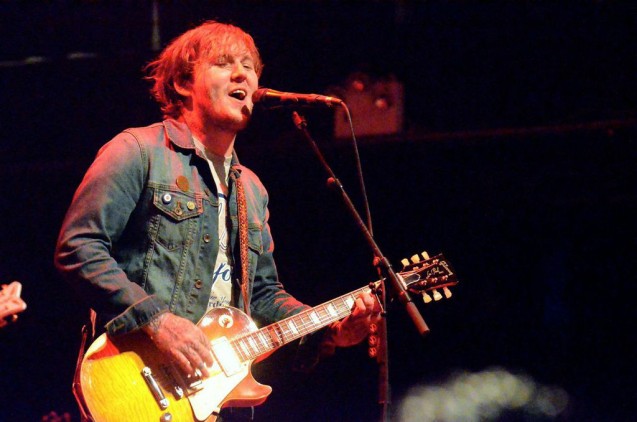 Much to the delight of us fans, Fallon announced that there would be no encore. He poked fun by stating, “This is our final song of the night, and guess what is isn’t “The Backseat”. The final was in fact, “We’re Getting A Divorce, You Keep The Diner” from their infamous debut release. I’ve never heard an audience chant final lyrics as loud,

“It’s all right, man. I’m only bleeding, man. Stay hungry. Stay free. And do the best you can.” 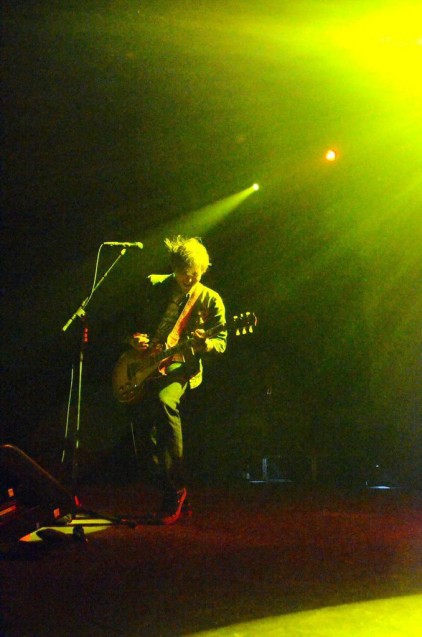 This show had something for all of their fans, whether from the beginning or newly acquired. It was an ode to the past as well as to the present. I’m anxiously awaiting the future. I’m hoping Skate And Surf, as well as their upcoming summer stop in Long Island in July, will give a glimpse.