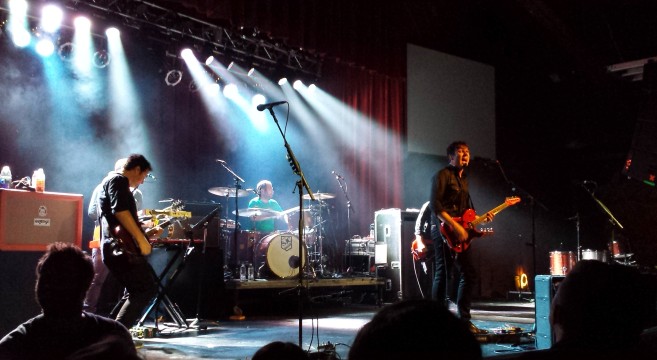 Friday night I was in Orlando, FL at House of Blues watching Brand New perform to a quickly sold-out audience. The next morning I was up at 4:30 am and on a plane by 6:00 am. I surprised my (now-ex) girlfriend with plane tickets to Asheville for our one-year anniversary. I had a whole day planned and gave her bits and pieces throughout the day (and I’m pretty good at planning shit). Jimmy Eat World was the final surprise of that day. She had no fucking clue. We casually walked down the street to “find a bar” after I took her to her favorite pizza restaurant (Asheville Brewing) which serves a gluten-free pizza with vegan cheese and real chicken, which is near impossible to find anywhere else, and even rarer to find one that actually tastes good. And, their’s is really fucking good. The best, even.

We walked up the block and around the corner to the Orange Peel. I pulled two concert tickets out of my jacket pocket, in the smoothest of manners, and handed them to the door guy. He scanned them and handed them back to me. After multiple inquisitive slaps to my arm, I finally handed one of them to my girlfriend, Sheryl. I wasn’t surprised by the enormous disbelief upon her face, nor by the tears that began to form in green eyes. This band meant the world to her, and I knew that. 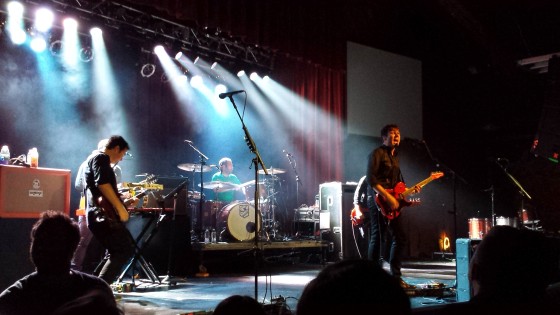 If you remember, we tried to see Jimmy Eat World at House Of Blues Orlando on December 6 2013. We failed, miserably. This was the night to make up for that, which I promised I would make up, and I always keep my promises.

When we arrived to Asheville that morning we fueled ourselves at Another Broken Egg Cafe with breakfast. Next, we pointed our rental car towards Catawba Falls, a double waterfall reachable after a thirty minute hike into the Pisgah National Forest. We hiked there last time we visited Asheville, after it was suggested to us at a bar we visited in Black Mountain, NC, located about twenty minutes from Asheville. However, we came illy equipped and only made it to the lower portion of the falls. The upper falls are technically closed off. There is a sign expressing that the near vertical path to the upper falls is unsafe and dangerous. But we were determined to conquer it. And, we did.

Between breakfast and the falls, we made a pit-stop at our gardener friends house who supplied us some beautiful Asheville marijuana. It takes my pain away.

With rolled joints in tow, we forged the treacherous path to the top of the falls. It was dangerous. It was difficult. But it was worth it. Once we found the top of the falls, we found true beauty: A bird’s eye view of the fall trees thickly covering the raised earth for miles. A one hundred feet of a gushing waterfall at our feet. No one in site in any direction (this is the part we took advantage of the most). Sexually. 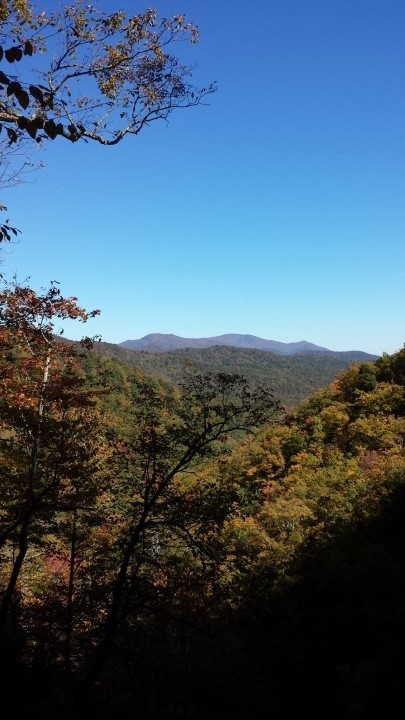 We allowed the cool autumn air to caress our newly naked bodies. An overwhelming sense of freedom came upon us. It was perfect. Surreal, mostly. It was like fucking on a cloud. What a dizzy dance. The best before-noon tone setter that there ever was. We cleaned ourselves in the fresh, cool mountain water, made our ways back down the falls and to the car with cheshire grins across our faces. On the way back to Asheville, we visited my favorite brewery in the nation–Pisgah Brewing Company in Black Mountain, NC–located in the warehouse/industrial district.

You walk in through a heavy metal door and down a small flight of metal stairs. To your right, large brewing tanks line a large room with an operation in progress. The smell of hops and malt and sweetness. But this sweetness will not be concerned with me. To your left, another door, through it lies the tap room. Concrete floors, an L-shaped bar, a large stage for bands to perform. Rolled-up bay doors, a rock garden, picnic tables… Behind them lie beautiful green farm land leading all the way up to the perpetual mountains that creep into the crisp blue skyline. Heaven? Are you listening? Sing it back to me. We purchased growlers and six-packs to bring home to Florida. They had very short life spans.

Fast Forward to the show–Jimmy Eat World were set to play their entire Futures album, an album that used to wake me up each morning when in high school and college, an album that has my favorite JEW song on it, “23,” and an album that preceded my favorite EP, Stay On My Side Tonight, which plays two songs that have a very personal meaning to me, “Closer,” and “Over.”

The crowd was very relaxed, in a euphoric-state even, and so were we, despite all the excitement within the moment. “I always believed in futures” rang through the perfectly tuned room called the Orange Peel.

I was very surprised by how well the sound was mixed, especially since my initial concern once I arrived–the room basically looks like a large gymnasium, I thought it would surely become distorted and echo-y. But I decided I’m gonna smile and not get worried.

It was a make-up show, ten-fold. The epitome of perfection in every sense of a Jimmy Eat World show. The eleven songs on Futures, the singles, “Work,” “Pain,” “Futures,” the fan favorites “Kill,” “Night Drive,” and of course, “23,” all left us hanging on every word, every note, and for some, every tear.

We’ve all been low. Some lower than others. I was pretty down for a bit in my early twenties. The first and second verse of “Closer” effortlessly bring me back to my most vulnerable times. Depression. Self-loathing. Insecurities. Regret. Those words still remind me of those feelings but now, they give me hope. Knowledge. Confidence. Motivation. Daily strength with the understanding that I overcame with resilience and prevailed.

They closed their set with “A Praise Chorus” and everyone’s favorite JEW singalong, “Sweetness.” With hands pushing as high as skin allowed, we sang along, every word, every drum fill, every “whoa” and “oh.” I was spinning free.

Jimmy Eat World, and especially that album and EP have a consistent effect on me. The world slows, time fades, amazing still it seems. It’s the one thing that stays mine.