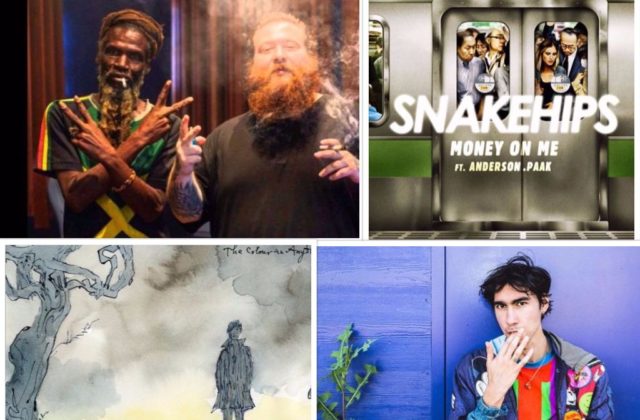 An installation of songs that are not necessarily new this week, though it’s likely they are, but probably just new to us. If you find this list yawningly glib then email us, silly, and lay your music knowledge down, please

Q is back to his gangsta ways with this new single that could be a track from his older, darker projects like Habits and Contradictions. The track gradually crescendos from the beginning, slowly building in angst as Schoolboy eventually comes through your speakers like he’s in the room with you. Schoolboy Q has the ability to really evoke emotion from the listener. I have no business gangsta rappin’ but if you drive by me while I’m playing this song I look like Schoolboy Q’s hype man, bobbing my head like I’m about to fall asleep in class. This new Q is undeniably back to his old ways and if this is the preface for his new album, TDE fans everywhere are rejoicing.

So, we should probably just do an entire column dedicated to Anderson Paak songs and how and why they’re so fucking groovy. If you’re unfamiliar with Paak, take a month or two to blast his albums on repeat. I promise you’ll thank me. For this track, Paak teamed up with the UK electronic duo for the vibey, moody “Money On Me” that makes me feel like a playboy for real. There is something inevitably cool about Anderson Paak and it’s palpable through his music and lyrics (check out my feature on him if this is turning you on musically). Snakehips became a force in the industry with their song “All My Friends” featuring Tinashe and Chance the Rapper. Their groovy chords and dance-happy beats combine effortlessly with Paak’s soulful flare. This song is a babymaker, champagne popper, and a nice one to have in your rotation while the herb is being passed around.

Pop culture lesson:  Action Bronson has a Television show on the Viceland channel called Fuck, That’s Delicious. He travels the world with two of his best friends/fellow hip-hop artists; Big Body Bes and Meyhem Lauren. Also along for the ride is his DJ the underground hip-hop legend, The Alchemist. As they navigate their way to popular and remote locations alike, they feast like kings at popular and well-respected places sampling the native dishes. Recently, they took a trip to Jamaica where they met a local artist by the name Jah Tiger. Mr. Tiger played his song “Mr. 2 Face” for Action and Meyhem and the boys from the big city fancied it a hit. Action Bronson takes the rest of the episode to document the recording process of the Action X Tiger X Meyhem collaboration. Bronson is literally a walking book on tape. His hilarious storytelling is littered with hyperbole and riddles galore. Even though he only spits one verse, it’s awesome. Meyhem Lauren’s verse seems to recall some of their more recent experiences filming for Fuck, That’s Delicious. Action and Meyhem’s verses sandwich Jah Tiger’s original chorus and verse — they are unintelligible other than the words “Mr. 2 Face.” But they were right; it’s a hit.

A creek. A stream maybe, whatever. A body of water, small, quickly rushes by your feet splashing them a little. Tiny silver fish escape the surface for a second and return to their slippery kingdom underneath. There are sounds behind you, beside you, somewhere off in the distance, but directly in front of you is the river. Teaming with effectual life, brimming brightly over the edge. Now what does that sound like?

“I Need A Forest Fire” by James Blake is a gift to the musical world. Try as I might to paint a picture of just how the introduction makes me feel, there are no words, just sounds. High tones, almost Morse code-like, beam off each other combined with organ pipes. There are flutes carrying the overture into solid synth, where we finally get to hear the first audible noise from Blake, a gospel like “oooooo” is punched out. The track is brought to us as one of the many from his latest collection of songs, Colour Anything. The album is the junior effort from the British songbird and his most stunning turn. At every corner is a collaboration building upon the next giving us an endless, full circle of songs. “Forest Fire” is the result of James’ and Bon Iver’s Justin Vernon who he says, “…is a great producer even though people may not know that about him.”

They worked together on this epoque-esque ballad side-by-side, with Blake first sitting down at the piano and exploring a lot more. The tones begin to drop an octave and the intro “Another shade, Another shadow” is ushered in low and underneath the alternating hiss of the kick. The song progresses like a slow burn hence the analogy to a relationship that needs a restart — a forest fire. If there are only ashes, then from the anarchic rubble, new love can rise. A striking moment is Vernon’s verse which hits, “You’re thicker than you think. You know that money bought your name. Caution, swelling, can I repay you with some blame?” To your knees. Stay there, might as well. Let the swoonful, gentle falsetto of Blake cut you and kiss it better in the same breath, barely giving you time to catch yours. You’ll be okay,* I promise.

I fell into this artist the way I do with most artists, from the outside in. I liked the idea of him. I liked that he was very much obscured to most of the population so that I could bring him up in conversation as if he were a gold star tacked onto my musical taste. Then the more I searched, and I hardly had to dig, he kept popping up. I listened to his latest album, Cut And Paste, and began to fall deeper into his very particular style of British synth-hop beats paired with candid lyrics. Oscar Scheller or just Oscar as he performs, was mine to hoard. I almost didn’t write this because I didn’t want to share his music with others (selfish AF, right?!). The word is out.

Oscar is reinventing indie pop. Gauche, I know. I’ve lived 23 years and I think I know enough to talk on such things as reinventing a whole genre? Sure. One thing is for sure — Scheller is creating, if not a new genre, a whole new audience. A listener that values deep, tripping basslines in front of flirty cotton candy piano sung with an slow oozing baritone over top. Sound delicious? It’s dirty good. “Daffodil Days” is the epitome of his sound. It might have come straight from The Parent Trap (LiLo version, duh) as mother and daughter discover a new relationship, traipsing around London. This version, however, has the vibe of two lust-struck teenagers cavorting Coney Island ignoring all “prohibited” signs and making-out on benches. Its immediate coos from Oscar begin the track triumphantly as the drum comes in to make you sit up straight and pay attention. “Don’t waste away. The feelings that we have remain. It tastes the same. Daffodil days.” The crooner’s Cut And Paste was released on May 13th, lucky us.