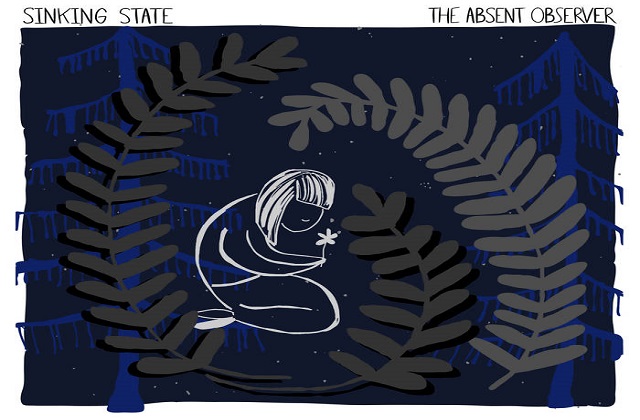 Left a city behind him to burn every memory; put 3,073 miles between him and the ashes, and started again.

There were traces of movement from within. Clues dropped that, perhaps, he wasn’t finished with music just yet.

‘The Absent Observer’ is a return to the beginning for me. Music has always been in and around me; the push and the pull, the rise and the fall. I am always reminded that I was the child my father danced and sang with; a subconscious connection between reluctant musicians.”

The now Seattle resident writes in length about the new project on Bandcamp and delves into exactly why this next chapter needed to be shared.

Music for Adams is not just a form of creating, it his form, it is the act of existing. It will always be there inside, begging for release.

He’s already had several deaths and resurrections in his career, (My Hotel Year, Inkwell, Field Kit) and a lifelong struggle with the seemingly unobtainable standards of a vapid industry.

The Absent Observer comes to us reluctantly from Travis’ mind.

This past year has brought me back to a love that I have tried so hard to dismantle. I don’t know if I was ever truly “meant” to be a musician, but for some reason, music will not leave me alone; no matter how hard I try to destroy it in me.”

This record is one hell of a soft punch. It does not feel quite as pained as My Hotel Year. The pain is there; but, rather than an outcry for help, it is an insight to the ache. A reflection of how wounds are a linear affliction we must tackle the rest of our lives.

The track titles alone, “Future Plans And Other Redundancies,” “At Least The Dogs Are Happy,” “Little Trouble Maker,” speak to those wounds and the lyrics seem as though they have oft tended the singer in moments of contemplation.

In the distant and standout track “The World Was Dark And Dark Was The World,” Adams plays with ambiance among an otherwise wordy repertoire of songs.

The guitar line is something I found at the end of a song I threw away. It was just this random pattern I started playing that had nothing to do with anything. I played with that pattern, reversing it and offsetting it under the main pattern, then added textural vocals, (I think of it as breathing.)”

The song does feel like breathing. It is a nice pause where the singer gathers his composure before returning into the fray.

“Toil Toil Roots To Soil” was the first leak off of The Absent Observer and it threw me off the scent.

“There are peaks and valleys and no one song can represent the whole.”

Adams is versed in the art of musical confusion. There is never one emotion, albeit an overall feeling, to an album. His process this time around was shared with a confidante whom he trusted with this step in a new direction.

“My very good friend Katrina (Expert Timing) was with me through this entire process. I think I drove her crazy by sending all these songs to her as I was writing them. I made cellphone recordings of all these songs as I wrote them and sent almost every iteration to her in real time. We talked about my process at great length.”

Katrina also did the artwork for the album, which, Adams was immediately floored with.

I wanted to mention the art work as it was one of the final puzzle pieces…When it came time for the official art, she was the obvious choice. I gave no direction (she went through it with me so I knew it was in good hands). This is the only design she did, and it is absolutely perfection.“ Travis spent the last year as a recluse of sorts, trying to figure out where his place was amongst all the changes in his life.

Around February/March of last year, shortly after uprooting my life and moving to Seattle, I began to view myself as something foreign and inconsistent with the “me” that I had known for the last fifteen years (an Absent Observer.) Something was off…I ended up having to leave my career, fall into financial ruin and live isolated from the world for a year. In the midst of the darkness, I made a very real deal with myself. “Make things. If you are going to stay, you have to make things.” So I put my energy into creating something.”

Sinking State is representative of Adams’ exit from Florida and the mental landscape he found himself in afterwards.

Selfishly, I wondered if we’d ever get to hear these songs live, feel them breathe, breathe the same air.

“It is highly doubtful you will. I would love nothing more than to throw my hat back in the ring, but my time has passed.“

“Do you feel expectations like that at all with this release?”

Zero. At this point, I just hope people give it a shot.“

It is not often we are granted access into the mind of an artist, let alone given such raw portrayals of them at their darkest.

Travis Adams gives us that.

But, in a sense, it would feel unfair to categorize this album as bleak. It is painted with such lightness, singable melodies, eager melancholy, and just damn good guitar.

Adams is a musician, whether he likes it or not.

And, we’ll be here waiting, watching, listening at the cusp of every turn, grateful for every rebirth.

Stream The Absent Observer in its entirety on his bandcamp, Spotify, & Apple Music.

The Absent Observer is one of two records under this moniker. The second record is called, Getting Good At Endings and “will be out later this year, if I don’t obsess too much,” Travis says.