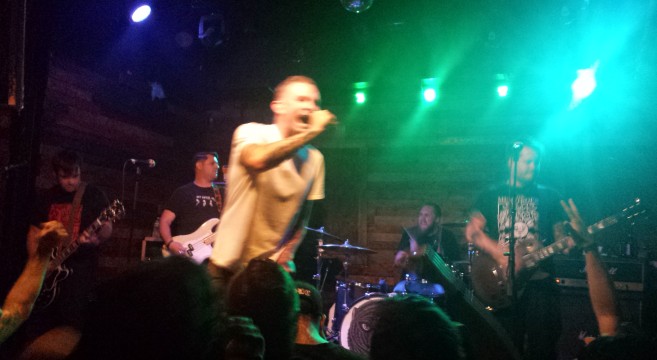 Blue and white marble swirled as the needle hit the wax record. The opening lyrics of I Am The Avalanche’s second album Avalanche United came belting through the speakers subsequent to one the best ways to start a punk record: a crescendoing drum roll. “So I’m alone for the first time in five years. Holy Fuck! Things have changed.”

So this is the first time in two years since I Am The Avalanche played a show in Orlando. Holy Fuck! Things haven’t changed a bit though. IATA still rock just as devouringly hard as always.

Orlando local punk heros Teen Agers opened the evening. Teen Agers came out in their uniform chino-style shorts and began right on time (Backbooth is getting better about sticking to set times). They pleasingly powered through several energetic songs from their cleverly titled debut album I Hate It.

One of my favorites on the album is “Moving Forward.” It starts out with a catchy guitar hook panned left which runs through the first verse. The song pushes and pulls thickly through its punk rock veins in verses and choruses. You can’t help but clap along with the flam rudiments on the snare drum “1,2,3!” through the bridge of the song and yell loudly with the calls-and-response vocals at the end repeating “I Hate It!” while you lift your tallboy PBR towards the shitty can-lights illuminating the stage. Just go grab a PBR and have a listen to “Moving Forward” by Teen Agers below and catch them at their next Orlando show on August 28 at Backbooth.

Backbooth has been booking a lot of great shows lately. Perhaps thanks to shrewd-eared folks at Norsekorea presents. I bounced back and forth between the Twin Forks show at The Social and the IATA show. Unfortunately, I missed Somos and Rust Belt Lights who performed between Teen Agers and IATA. “Somos was fantastic” according to my friend in The Cold Start.

I Am The Avalanche began their set with “The Shape I’m In,” their new single from their recently released third full length album Wolverines. The bassist was wearing a My Hotel Year shirt. Yes, it was awesome and perhaps planned. Vinnie was sporting his usual white t-shirt and brown jeans with some classy blue boat shoes. Their drummer kept everyone in check with his swift, heavy hitting beats behind thick guitar riffs and octaves. Here’s a shitty pic (this was as still as Vinnie was the whole evening) : IATA played a great mix of old and new throughout their hour-ish set. The crowd eagerly climbed toward the stage shouting back lyrics from the pit to favorites like “Holy Fuck,” “Amsterdam,” “177,” “I Took A Beating,” “This Is Dungeon Music,” “Gratitude,” and of course, “Brooklyn Dodgers.” Check out the official video for “Brooklyn Dodgers.”

Sometimes you don’t want to think about a show too much. Especially a punk rock show. Sometimes you just want to inhale as much of an experience as you can and hold it deep in your lungs before inevitably losing the fight against exhaling. That’s how the IATA show was. It was a breath of smoky, sweaty, thick air that I strongly desired to hold deep in my lungs because it just tasted right.

Here’s a video I caught on the Shows I Go To instagram of “Holy Fuck.”

Catch I Am The Avalanche on the road in September: