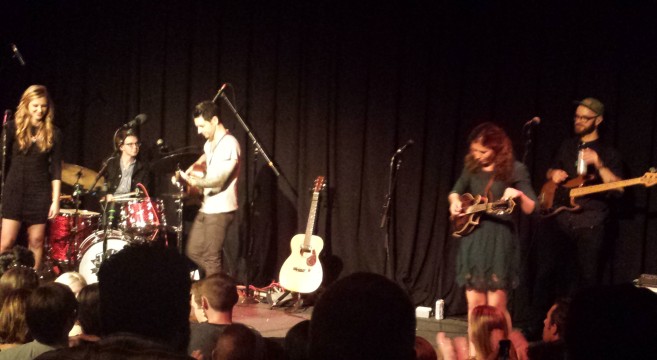 I was sitting in my girlfriend’s car and I shushed her. “My gut don’t lie to me!” We both screamed before bursting out into laughter. Those are lyrics to “Something We Just Know,” the first song we fell in love with by Twin Forks. It’s also the first track on their debut EP Twin Forks which lead singer Chris made perfectly clear that you can get most of for free: “If you like free shit, email us at [email protected], Subject: ‘Music’ and you’ll get some free music!” He exclaimed.

It’s not often I buy a CD. I’m a vinyl nerd and otherwise listen to shit on Spotify (call me an elitist if you may). But I bought a $5, 5-song CD from Twin Forks last year and fell in love both with it and to it. It’s beautiful. It’s folky. It’s honest. It’s passionate. Ahh shit, my emo is showing…

I particularly fell in love with/to “Cross My Mind” and the simple offering in its lyrics:

“Why don’t you stay for a while? It’s been too long since I’ve smiled.
I won’t ask you for too much; good conversation and such.
From time to time you cross my mind. Good company is hard to find.”

With our pseudo soundtrack for a new love in tow, purchasing tickets for “us” to attend their Orlando show on June 6th was done graciously; without hesitation. It was a knee to the gut when they announced the show was being rescheduled to July 23 but even more of a lung emptier when I caught wind of the saddening circumstances – Chris Carrabba’s grandmother had passed away.

Yes, Chris Carrabba. Ring a bell in your brain? You know, he’s in Further Seems Forever and a little-known band called Dashboard Confessional. Twin Forks is Chris’ new project and happens to be “what he truly loves playing, what he grew up listening to, and what he has waited a long time to feel confident enough to play live.”Via Pop-Break

South Florida native, Corey James Bost, served as the sole opener for the show Wednesday evening. His music was right on the cusp of rocking out. I feel the straw that could push it over the edge into rock town would actually be if he himself initiated it by moving around the stage a bit more during songs. C’mon Corey, let your emo show, we’re all doing it! 😉 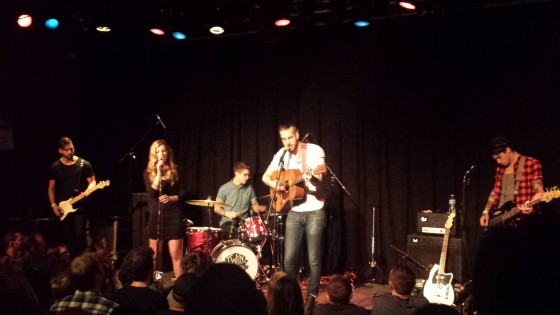 “She broke my heart when she explained to me the way your skin felt…” Corey began. As most the room chattered and focused on each others’ moving lips, I carefully watched Corey and his band mates. When the drums kicked in and those gospel, chant-like vocals came bursting out of Corey and his cousin Kim (who’s also in Twin Forks), everyone kind of trailed off mid-sentence in their conversations and looked up with genuine interest toward the stage. That song was called “I’ll Let You Down.” It was performed with passion.

I first caught Twin Forks at Funshine Music Festival in May of 2013 then again at The Social September of 2013 (where I bought their EP). This time, despite Chris being a little bit drunk, the band were more solid than ever. They began their set with “Can’t Be Broken” and a handful of energy.

Chris Carrabba may have been born into this world to play love songs. His passion bleeds all over each stage he performs on. They were probably still slipping in it the next night at The Social during Ceremony.

“Kiss Me Darling” offered a fun, sway-worthy sing and dance along at around 80 bpm. I watched my friend Chris Martin giddily sing along between shots (photos shots, that is) as I sang the same. Here’s a shitty pic: 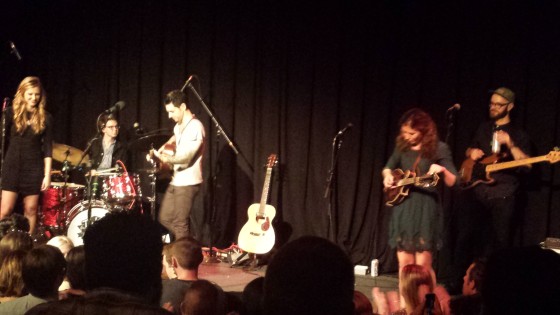 “They won’t give you a drink at this place at 7:57pm (doors opened at 8) no matter how many times you’ve sold this mother f*cker out!” Chris Carrabba joked. As Twin Forks played through a mix of songs from their self titled debut LP, they snuck in an eclectic range of covers like “El Scorcho” by Weezer which I listened to while getting a drink at the back bar and talking to Bartender Brian about Levi Jeans. Shortly after, they covered “The Swiss Army Romance” by Dashboard Confessional and the room was like a choir.

They even broke into “General Specific” by Band Of Horses and Chris Carrabba caught some air time using the bass drum as a springboard. Another Dashboard cover came about and the room was equally swooned as they played through “Stolen.”

“This is my home town crowd. I’ve seen you all at many punk rock shows so I know you know how to scream ‘Hey!’” Chris Carrabba encouraged us before making sure we all knew how to respond to his calls during “Scraping Up The Pieces.” That song really hits home lyrically: “You coulda had a better man but I’m the one you chose.” I sang loudly while squeezing tightly the hand of my partner.

You can tell that Chris Carrabba is “truly playing what he loves” with Twin Forks. The band were a perfect backdrop to the gleaming frontman that Chris clearly is. As they played “Cross My Mind” our voices echoed his with the “whoa-ohs” throughout the song. Chris made the audience aware that they were skipping an encore since they were on a strict time limit and encouraged us to cheer or do what we may preceding an encore. They closed with “Back To You.” A very fitting ender (no pun intended to Chris’ middle name) with the extended multi-chord cadence at the end of the tune.

Interestingly enough, the two “Official Videos” that have been released by Twin Forks have about a minute of a story at the beginning of them before the music begins. They also feature the same actors. No, not anyone from the band. A story about love in “Cross My Mind” and what seems to begin as a story about death in “Back To You” but ends with a “To be continued…”

After the show I went to the Ying Yang Twins at iBar and I don’t want to talk about it. But here’s a video worth 1,000 words: