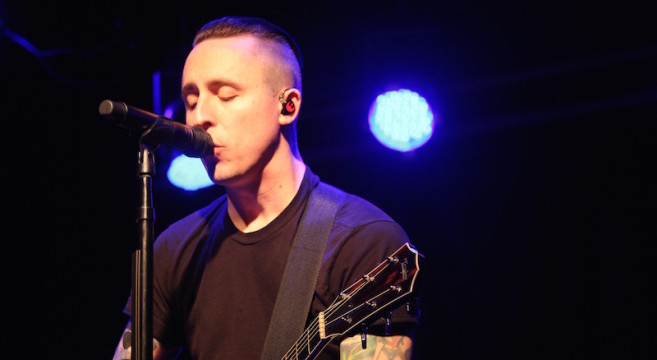 The Orpheum was filled to the brim when Yellowcard took the stage. Between the die-hard love for the Jacksonville alternative rock set and the long-awaited return, the anticipation of one of Florida’s favorites was enough to send hundreds in a shrill tizzy.

The ever-evolving sextet oozed equal parts energy that they’ve maintained after 15 years as a band. Yellowcard newbies, surprisingly a majority of the crowd, were the dominant force in the slams to hits from latest album Life A Sail, a release from late 2014 (Lift a Sail Album Review).

“If this is your first Yellowcard show, it’s been 15 f*cking years- where have you been?”

It’s hard to list top Florida acts without including Yellowcard. Even after a move to California to record music, the “Ocean Avenue” boys have always paid homage to the East coast of their home state. Just 10 years ago, the band invaded television screens nationwide with the aid of MTV, forever imprinting their romping alt-rock image in the hearts of teens, including my own.

When the band took a hiatus in 2008, I did too. Did I miss a lot over the years? Somehow in the years since their triumphant return, I’ve slept through two fresh releases that highlight the vitality of the active band. It’s a shame on my part because Yellowcard has only grown in our years apart.

Wail and smash were the gestures of the Downtown Fiction performance, swaying more hips and raising more voices than openers often offer. The Fairfax band invigorated the anxious crowd, who had been waiting an hour past doors’ predicted opening, and gave that live music anticipation release that was well-needed. Though famed for “I Just Wanna Run,” their set satisfied multiple flavors’ cravings, unique in only having released their sophomore album. But not without dedicating a number to the Ybor City roosters.

Biting the line between post-hardcore and spunky alternative was long-anticipated Finch. With the lights alternated between hues of red and green, the darkness hinging on their performance was as potent as the California band wanted the audience to feel. But pop-ier but edgy flavored “Letters to You” evoked an enriching moment, the audience swept away by the potency that is a Finch favorite.

Stepping into the Orpheum was almost a swirling time vortex with the Brand New and Less Than Jake t-shirts and cheesy pop-punk ballads that blasted between sets. But it wasn’t all nostalgia, demonstrated by an opening violin solo “Convocation” by longtime Yellowcard performer, Sean Mackin.

Yellowcard has developed an anthemic roar since their early 2000s image, smashing through emotions and chants with power ballads, echoed in album titled hit “Lift a Sail” and Southern Air hit, “Awakening.” Yellowcard is energetically flashy and catchy, as per their origin, but they’re rooted in depth that was always surprising for me as a teen and even more so now as an adult. Their richness in performance is still as striking as an Atlantic wave.

The fan loyalty showed: just 20 minutes before the initial time slated for doors, the line of loyals was wrapped around two Ybor City blocks.

Their sound is one that just sticks with you, and the memorized words from lyrics 10 years ago come just as easy now to scream along with their performance. They’re the boys you grew up with, and the resiliency in “Believe” is just as memorable as “Transmission Home.”