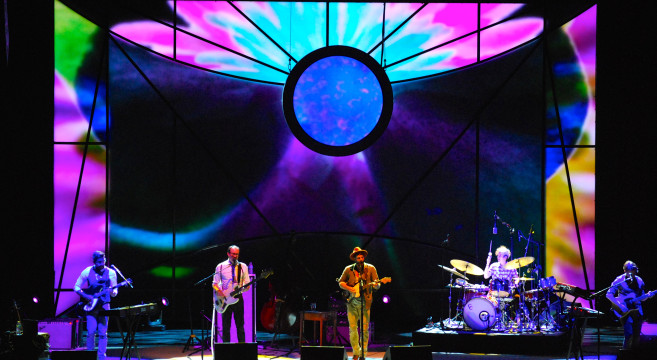 It takes time to stay sane. Between work, school, bills, and other bullshit it’s easy to lose track. The moments we have are fleeting. Each breath that flows through your lungs may be your last. It’s not enough to just be, you have to be in the now. Few people can remember that. But when a potential counterpart does, you’re often intrigued to see where that connection could go. I found that in a woman not too long ago and I wanted to share this with her at the Ray LaMontagne show.

She got to my place around 6:45 and the tone from her incoming text interrupted my pre-show preparations. An exotic woman with a dark tan compliments a white blouse, black pants, and pink heels like you wouldn’t believe. We arrived at the Bob Carr Performing Arts Centre around 7pm, an hour before the show started. There was a minor mix-up regarding my receiving of the coveted photo pass but that was quickly straightened out (thank you Mitch Foster for forwarding that email to me). They also had some bizarre rules for taking pictures: 15 rows back, you can only stand in one sanctioned spot for shots, and the camera goes in your car immediately after Mr. LaMontagne’s first three songs. Rules make me feel icky so I decided to do what I damn well please.

The setting sun seeped through the large glass windows in The Bob Carr Centre. Red, yellow, orange, and gold played in the prisms of the chandeliers. Mother Nature blessed us with a beautiful night and pristine scenery. As the crowd began to build I shifted my gaze towards my date as she took in the view of Downtown Orlando. The bullshit slowly began to fade away.

There was an eclectic mix of people attending the show; young teens, college kids, middle aged professionals, and older couples all shared a desire to hear Ray sing live. My date and I grabbed some Heinekens from one of the full bars in the Bob Carr and “people watched” for a while. We met Terry, a fellow Navy Veteran and Old Dominion native along with her husband Richard. They are that cute older couple you see walking together in the park; the kind of relationship every person hopes to have one day. True soul mates.

I asked Terry how she came across Ray LaMontagne’s music. “My son suggested I give him a listen.” She stated in her sweet voice that sounded like it had been seasoned by years of baking cookies. “I grew up listening to country and folk” she said with her husband intently listening and gently nodding in agreement. “I like everything about him. Today’s country music sounds like bad rock.” She lifted her bag and smiled “I already bought a shirt and his vinyl record.”

Jenny Lewis of Rilo Kiley and The Postal Service had just taken the stage by the time we got in. I ran down to take a couple of pictures (below) and to get a feel of how the crowd was reacting. Lewis’ set was simply superb; her sultry voice soared through the hall and her mesmerizing dance moves captured the attention of every person in the place. Lewis has an incomparable energy in her live shows and her six piece band were no slouches themselves. She played the Rilo Kiley hit “Silver Lining” while everyone swayed from side to side followed by “The Moneymaker.” If the seats weren’t bolted down in the Bob Carr I’m sure a few people would have ripped them out to dance.

Jenny’s new album The Voyager is out on July 29 and the first single “Just One of the Guys” has been released with this self-directed video featuring a celebrity cast including Kristen Stewart, Anne Hathaway, and Brie Larson.

After a short intermission Ray LaMontagne took the stage. In keeping with the high energy mood of the room he opened with the upbeat Bob Seger-esque “Supernova.” Ray LaMontagne’s voice is like chocolate covered bacon, dried and smoky but still sweet. Behind Ray was a massive screen displaying a plethora of sixties inspired visuals; tie dye, cosmic trips, and a myriad of colors. All of this went black and Ray LaMontagne began to talk about a song of his that was recently covered by the pop superstar Justin Timberlake. The opening chord to “Jolene” rang out from Ray’s guitar and time stood still. All that was moving were hands searching for their counterparts. A pair of puzzle pieces finally connecting. Every heartbeat in that intimate space pulsed in unison with his playing. Ray’s voice guided the crowd as they reminisced about love both past and present.

Ray LaMontagne worked in a shoe factory and did odd carpentry jobs at one point before he began making music. Due to these experiences his music goes against the mainstream grain and he has the ability to portray different walks of life.

He played a wide range of his songs and gracefully switched from high energy to intimate. My date and I sat there, my arm around her while she rested her hand upon my thigh, just enjoying the show. All the stressors of life seemed to disappear in those moments Ray LaMontagne crafted. Everyone was there, in the now.