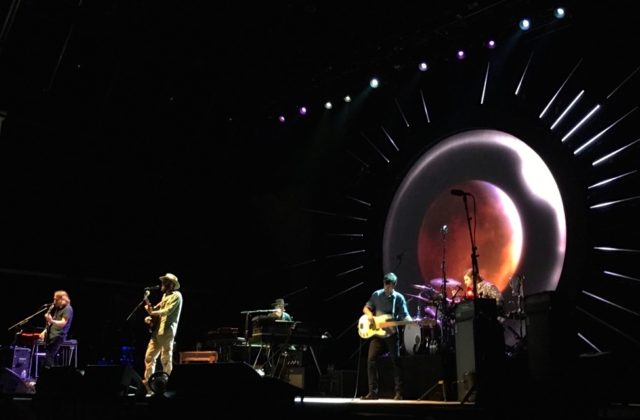 It was a wet one! St. Augustine’s skies were weeping in sharp contrast to my elation. And it felt right that it was raining for Ray. My friends and I pulled in to park at the St. Augustine Amphitheater as “Let It Be Me” played. There was a moment of silence in the car as the rain caressed the windshield and we listened along as Ray sang,

But, that very point in time was right, so very right. It was at this beautiful moment when it finally hit me: I was about the see Ray LaMontagne live with the band members of My Morning Jacket backing him. HOLY SHIT!

Thunderous applause erupted as Ray crossed the stage to take his place at the center mic. He started to play “Burn” off 2004’s Trouble. His raspy, sweet vocals warmed my soul like the top-shelf, room temperature whiskey as it traveled down my throat. A single spotlight illuminated the serenading form in front of me. “Jolene” came next, because what’s a Ray LaMontagne show without his most widely known song? Ray added a harmonica to the mix with the holder joined to him like an extra extremity. The harmonica hummed as “Like Rock & Roll and Radio” brought to mind emotions many of us have emitted and fears many of us have felt: “Are you still in love with me, like the way you used to be or is it changing?” “Trouble” rounded out Ray’s acoustic set as his voice soared above the amphitheater.

What came next blew my music-loving mind! Tommy Blankenship, Carl Broemel, Bo Koster, and Patrick Hallahan of My Morning Jacket joined Ray onstage for the electric part of his set as they played through Ray’s latest album Ouroboros. Ray LaMontagne and My Morning Jacket?! Okay, I can die happy now! The album was played straight through like a story. In fact, the theme of the album and meaning of the title is ‘infinity.’ The music was continuous, played from beginning to end– in fact, it felt as though it didn’t really have an ending. Not only is Ouroboros a glorious album that brings back the ’60s psychedelic rock vibes, but when seen live, the audience is taken on a Pink Floyd-esque, atmospheric journey. Jim James (also of My Morning Jacket) produced Ouroboros, and his influence is obvious. Listen for yourself!

“Part One – Homecoming” started the magic off as the moon became the backdrop. White spotlights shown down on each band member, illuminating them in what resembled moonlight. The music kept climbing in decibels towards the end of the song as the band was left basking in yellow light, leaving the audience in awe. “Part One – Hey, No Pressure” brought more rock n’ roll to the set with guitar riffs that seeped into my veins and left me addicted to their sweet sounds. My rock n’ roll trance continued with “Part One – The Changing Man” as the eclipse on the album’s cover art took to the background and was greeted with warm applause. The red moon became bigger and brighter as Ray and the band played through “Part One – While It Still Beats” coercing its enormity with their ethereal “ahhs.”

“Part Two – In My Own Way” had me feeling as if I was floating in space with the red moon staring back at me intensely. I closed my eyes as Ray’s voice rang out, “Lock the door, draw the shades, close my eyes, I’m miles away. I’ll spend the day in my own way.” My eyes opened to the crescent moon that accompanied “Part Two – Another Day.” The moon went through its phases all the way to the end of the song. Pink Floyd could be felt in spirit throughout the amphitheater while “Part Two – A Murmuration of Starlings” reminded me of The Dark Side of the Moon via its two minute or so instrumentals that slid into “Part Two – Wouldn’t It Make a Lovely Photograph.”

Never gonna hear this song on the radio.”

With those lyrics, Ray reminded us that he wrote this album as an experiment of his own sound, not to appease audiences with what they’re used to. He sings out, no, cries out pleading for understanding as Ouroboros comes to a close. I understand it. I get it. I hope others do too.

Ray wasn’t done! In a way he did appease audiences by playing a few songs off Supernova. “Lavender” turned the stage into a lava lamp with psychedelia emanating from the musicians’ bodies. Purple, red, blue, and orange exploded onto the stage. “Ojai” came next as the Ray we are all used to started to shine through a little more, lightening the atmosphere a bit. “Supernova,” “Airwaves,” and “Drive-In Movies” got everyone moving in their seats as the songs rounded out Ray’s set.

The absence of the musicians didn’t last long before they graced the stage for the encore. All of the amphitheater’s souls were encouraged to break free from their seats where they had sat entranced for most of the evening. I got to my feet as “She’s the One” played on and bodies started moving. Blue, red, yellow, green, purple– each color illuminated a member of the band. Next came “All the Wild Horses,” one of my favorite songs of the night that also brought me to tears. Ray gave us a different live version of the song as the rows of people crowded together at the front. Goosebumps erupted on my skin as Ray sang over and over,

That’s when that stray tear rolled down my cheek. Yes, I cried, and no, I’m not normally a crier. Right then, I was so happy! Happy to be alive. Happy to be where I was in life. Happy to let my troubles roll away, even if only for the moment. As someone who lets their emotions fester internally, someone who has a lot of anxieties, and someone who too often doesn’t express the things they feel, it was a relief to be rid of those things completely in that moment when Ray let me know it was okay to “let em’ roll away.”

Ray and the talented My Morning Jacket members ended the night with “Julia.” For me, however, “All the Wild Horses” was the perfect ending to a perfect show. That’s the tune that will forever stay in my mind as the final song that ended my evening with Ray LaMontagne.