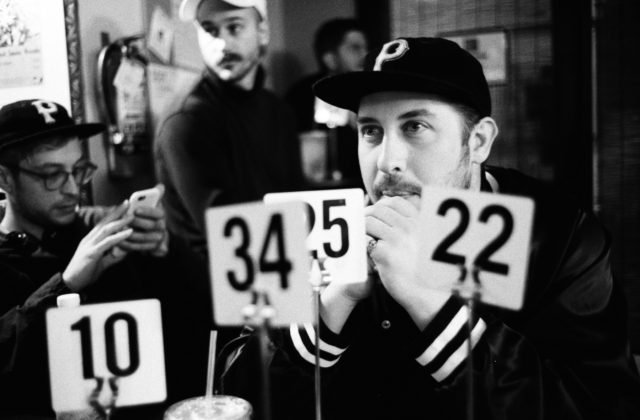 Portugal. The Man Create A Soundtrack To The Revolution With ‘Woodstock’

A distorted cry from an unfamiliar voice.

Not a far off cry though, for a world burning its only resources, killing its own kind, and a homeland run by a tyrant with a hard on for policies which harm anything and anyone within a thousand miles of the margin.

Portugal. The Man thinks we’ve been a little too quiet; our hands too tied to our sides, and they’re us calling us out on our bullshit in their signature psychedelic style.

To be fair, it’s been over three silent years from The Man, himself. Last we heard from the ever-ebbing lineup, anchored by John Baldwin Gourley, they took us down the belly of the beast with 2013’s Evil Friends.

2017 finds them emerged, glottaling out of the gassy stomach of society with clarity and somehow, even more finesse than before.

When bands take a break like that, you have to wonder if it’s a truly a small reprieve from the exhaustion, (we’re talking about an album a year since 2006), of creating or if something inside is really broken.

Woodstock is the album we were never meant to hold. (There’s something here about festival babies…happy accidents?)

There was a project already recorded, named, practically sealed and sent out, but something didn’t sit well with the members of the band. They felt Gloomin’ + Doomin’, the projects resident title, as a whole was not cohesive, but more of a collection of individual songs. Gourley needed to retreat. Upheave himself from the smoke and clout of today. He needed to go home; Wasilla, Alaska, to be exact. (Apparently, Sarah Palin is PTM’s #1 fan and lore has it, that if you play “So American” on your front porch, Putin himself sends over one pitbull with a pout primed in MAC’s matte shade of ‘Ruby Woo’. So they say…)

One original ticket stub from the famed, muddy debaucherous NY festival in 1969 and a conversation with its owner, Gourley’s father, and Woodstock came out from there kicking, screaming, and smoking a j.

2016 had A Tribe Called Quest’s call to political arms record, We Got It From Here…Thank You For Your Service, and now we have Woodstock. While past works of Portugal. The Man have never been afraid to excavate the flaws of our systems put in place, this time around they’re cocking our heads to each other; to revolution. Aptly titled and inspired by that era, this album is not to be undermined. It is only fools who think the youth are foolish.

As the children of minds from such a time as the Vietnam War, we were bred with guts and gumption and in our veins. Guts which now boil with recognition of past transgressions seeping into our own time. “Feel It Still” is the groove leading the charge. The second single off of Woodstock is just as heavy as it is light. Gourley references his mortality and questions how much time he really has with his daughter, Frances, whom he says really grew up during the process of making the album.

“She was two and a half years old when we started making this record and she’s five now. She was a big influence.”

“Got another mouth to feed

Leave her with a baby sitter, mama, call the grave digger

Gone with the fallen leaves

Am I coming out of left field?”

“We could fight a war for peace

The track ponders that perhaps, there is a parallel between the social and political climates of 1966 and today. Doomed to repeat; pushed to fight.

Portugal. The Man have made the soundtrack to the revolution with Woodstock. Gourley sings about history and its sordid past on “Live In The Moment”.

“Your family swinging from the branches of the tree

Got soul to sell

The indie rock quartet are here to make you squirm. Do you feel uncomfortable? Do you feel confused? Incensed? Good. Great music does that. This album is the worm burrowing into your cortex, waking you the fuck up, telling you to look around and start questioning your surroundings. It starts with this.

One of the best lines off the record comes from “Rich Friends”. “Living life like we’re the only ones who know we’re famous.” The boys are trying to scheme the system on this one. If unfair classism is rampant anyway, why not swim with the sharks? PTM is best when they’re tongue in cheek, and they’re at their peak on this track. ‘Crashing on adderall and chardonnay.’ Aren’t we all?

Zoe Manville, incredible vocalist and mother to their child Frances, helps tie off the album perfectly on the exclamation point of Woodstock with “Noise Pollution.”

The past two years have been incredibly tumultuous. The song expresses the difficulty in making sense of tragedy in our globalized world. We are all connected with the internet and the news is thus almost always present. We often learn practically instantaneously about tragedies, but are often quite physically and/or emotionally distant from them. How do we relate? How do we avoid becoming disillusioned and desensitized? Nonetheless, the song exhibits powerful solidarity through the bilingual chorus.”

The making of what was to be Gloomin’ + Doomin’ was Portugal. The Man holding a mirror to themselves and in their subsequent reflection, Woodstock was born. In that birth came a second mirror, this time held for us to see ourselves.  An endless, terrifying hall of mirrors.

Is history repeating itself?

If so, it sounds damn good. Hope they’re playing Woodstock  in hell.