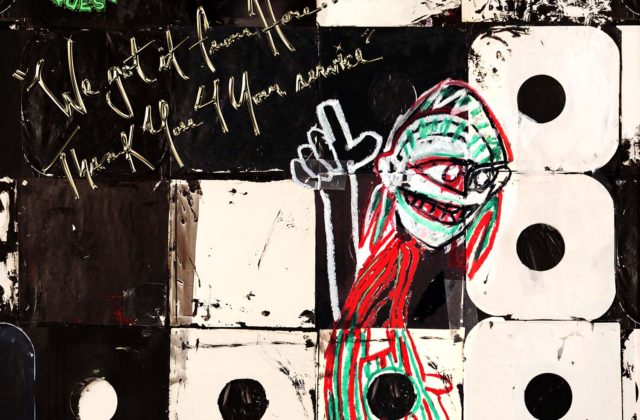 THANK YOU: A Tribe Called Quest | ‘We Got It From Here… Thank You 4 Your Service’

Editor’s Note: Everyone who knows me, knows I’m in love with Aaron Dinzeo. It was friend crush at first sight when I saw those chicken legs. Freshman year of college found us running cross country together; blazing trails(him faster than me), pissing off lunch ladies by staying past cafeteria eating hours(ten bowls of Fruity O’s later), and playing music latenight in the dorms(him-Fireworks, me-The Fray (2010 was weird.) His palate had a taste for more than just punk. He was able to weave between genres with ease, speaking with a quiet ferocity of his love for whichever artist he felt that day. I remember a specific conversation Sophomore year before the Regional PSAC XC meet. We discovered our warmup playlists both consisted of one Mr. Kid Cudi and immediately fueled each others obsession further. When A Tribe Called Quest announced they were releasing a new album, there was no one else who can drop a sub 4:30 mile whom I thought was more fit to write an ode to the icons than my fellow college running mate; someone deeply intertwined with an appreciation for the band and the significance of this record. Aaron Dinzeo currently lives in Alamosa, Colorado where he trains intensely as a long distance runner. He’s a Post Collegiate Track and Field Athlete, Three time Academic All American First Team, Seven time All American in Track and Cross Country at California University of Pennsylvania, Degrees in Archaeology and Forensic Anthropology, member of the 2016 United States Cross Country Team(NACAC XC Champions), lover of good books, good music, Pop tart and Oreo connoisseur, unofficial semi-professional at Tony Hawk Pro Skater 2. He is an inherently good person; the highest form of a human I have ever encountered. As his Instagram bio states:

“I can probably do anything.”

And you know what, he probably fucking can…the beautiful, scrawny son of gun.

The prodigal sons have returned, and it’s good timing too. However, timing isn’t as big a concern for A Tribe Called Quest, so much as being timeless.

I first heard A Tribe Called Quest in 2009. VH1 was showing one of their infamous, ‘Top 100, 50, 25’ (does it matter?) lists for “greatest rap songs of all time,” if they could be so bold. My 17 year-old self was really only discovering music outside of his typical hardcore rock scene. Like the cliché of many who want to give rap a chance, but aren’t sure what he or she may really enjoy, I clung for a period to what some call “‘90s rap,” an appeal to music which has already been validated by time (i.e. it was, in many ways, safe from judgment). This description is so chronologically broad, it brushes over entire sub-genres, themes, ideas and livelihoods with little thought given to the idiosyncrasies artists offer in influence to the generations which follow. VH1’s list counted through many of what most can agree are some the greatest songs of the genre:  “C.R.E.A.M”, “Children’s Story”, “Rapper’s Delight”, “The Message”, “Juicy”, “’93 Until Infinity”, “NY State of Mind”, etc. Somewhere in the top 10 was “Check the Rhime.” I fell in love. GODDAMN.

It was smooth, it was witty, it had double entendres. It had jazz and beats, and chemistry. It was finding treasure; the Holy Grail.”

I had this secret obsession which, I assumed none of my friends or classmates had, or maybe they were also keeping it a secret. Regardless, I cherished it. I downloaded ATCQ’s The Anthology from 1999; a catalogue of their greatest hits from a time which no longer seemed to exist. I had no idea of the magnitude of their history or influence at the time.

I didn’t know that in 1998 the world of hip hop suffered an early exit and bow from one of the greatest acts to grace the genre.”

Michael Rappaport’s 2011 biopic, Beats, Rhymes & Life:  The Travels of A Tribe Called Quest gave insight into one of the biggest question marks in hip hop: What happened to the Tribe? The group, consisting of MCs Q-Tip, Phife Dawg, Jarobi White, and DJ Ali Shaheed Muhammad had been a name in the game since their emergence in the ‘80s. Creative differences and what seemed like petty disagreements, misunderstandings, and arguments between lifelong friends, Q-Tip and Phife, caused a rift which became too big to fake through it. They split. seemingly abruptly, and looked as though they would never make music again.

A Tribe Called Quest became classic. They became a memory to longtime fans and music lovers who had followed the inception of jazz rap and the dialogue which the Native Tongues collective had created through music. However, they’ve always stayed relevant, if only background. Positive vibrations, jazz influences, praise of consciousness and social awareness; they are distinctive in their style. A Tribe song is not easily confused for another artist. Albums like, The Low End Theory (1991) and Midnight Marauders (1993) received massive praise for being groundbreaking; set to go down as great contributions to the hip hop conversation and solidifying of the Tribe’s legacy. For this reason, so many relevant artists today feel their influence comes in some part from A Tribe Called Quest; whether it be Kanye West, Kendrick Lamar, J Cole, or Andre 3000. But perhaps, what was missed most was the classic chemistry of Q-Tip, Phife, and Jarobi rhyming over Ali’s cuts; the precision, their complimentary rhyming styles. It does truly sound like listening to a family speak; noting their comfortability and confidence.

The reunions started in 2005. There was no confirmation of new music until 2015 with the spark that A Tribe Called Quest had reassembled and was beginning work on recording a new album. On November 11, 2016, fans got what they had waited 18 years for.  We Got It From Here… Thank You 4 Your Service is resurgence in the form of a matured, conscious appeal to reason, and a straight condemnation of problems in America.  The 16 track playlist doesn’t rest on the laurels of achievements past. It gets right to it.  You need only feel the reclamation of the Tribe in “The Space Program,” with a call to come together and the pointing out of a “mass un-blackening” in America; the cynical, albeit realistic, assertion that the poor and minority groups in America are often felt unwanted by a white majority and disillusioned by headlines meant to distract them from it.

It’s no mistake this album reaches us on the heels of one of the most divisive and inflammatory elections in modern American history. When Kendrick Lamar’s ‘To Pimp A Butterfly’ was released in 2015, it felt essential.  It described some of the most instinctive and banal attitudes which persist in American culture. They felt eerily appropriate for the protests and riots in Ferguson, Baltimore, and elsewhere that were happening alongside the album’s release.  Kendrick had nailed the zeitgeist, and the Tribe has done the same here.“

With powerful features from Jack White, Kendrick, Kanye West, Andre 3000, Anderson ,Paak, Elton John (!!), and the closely associated and familial contributions of Consequence and Busta Rhymes, this album pushes us repeatedly to look around. “Conrad Tokyo,” in particular, has Phife and Kendrick Lamar questioning how people are allowing the political climate to persist and what’s more, that we’re seemingly okay with it. “Ego” and “Kids” ask us to turn the mirror on ourselves and dispel what the world has picked out as stereotypes. Afrocentricity, individuality, authenticity; these are all hallmarks of the Tribe’s message as much now as it was 26 years ago with People’s Instinctive Travels and Paths of Rhythm (1990). As much as the album is celebratory, describing their own lineage through the genre and the carrying of their message through artists like Kendrick Lamar, J Cole, and Joey Bada$$ in “Dis Generation,” it’s a memorial. In March of this year, one the original seeds who had shared in the successes of A Tribe Called Quest’s legacy, Phife, passed away due to complications with diabetes. Though he passed months before the album’s release, and even before they had finished recording, he was instrumental in how the finished product would look and sound. “Lost Somebody” is a eulogy; an ode to Phife’s life and his lifelong friendship with Q-Tip. Inherent in a return like this after such a long hiatus would be the opportunity to reminisce, but Phife’s death makes it run all the deeper. It’s a goodbye. Before the album’s release in November, Q-Tip made it clear it would the group’s last album. A goodbye from the top. “The Donald” pens Phife as a legend and a mastermind to sign off to the world. A Tribe Called Quest’s final thank you to their lost member.

Roughly seven years since my first impressions of this group, one thought comes back around, that word, timeless.

A close friend of mine once argued the merit of getting a tattoo to an acquaintance.  The other guy argued the sentiment that a tattoo is a permanent stain on an otherwise pure and clean canvas of skin, by the grace of God. My friend responded with,

Fuck off. My shit’s gonna be timeless.”

Perhaps arrogant, perhaps impulsive, the statement had an air of confidence. It would be in self-reliance that the decision would be made, not by the suggestion of popular opinion, or some so-called divine image of self as prescribed by someone else. A Tribe Called Quest hasn’t operated much off of trends or what has been popular in the short term. They’ll never tell their audience who to follow, unless whoever is leading is worth their salt to back up.  They’ve blazed paths in hip hop through jazz samples and wonderful collaborations with respected artists. A three decade career in music has served to make them masters of craft; not concerned with what won’t be around tomorrow, only focused on what will remain long lasting. They haven’t tried to re-release an ode to 90’s music or change their style to appeal to the new age. They’re back, but they’ve always really been here.  They can be felt in hip hop’s best pages, in a swirling conversation of social commentary which has spanned decades. And in a swan song meant to sign off in memorial to a friend, to the world, and as a burning exclamation in your mind, A Tribe Called Quest is back at the forefront; right where they belong. ALBUM REVIEW: A Tribe Called Quest | ‘We Got It From Here… Thank You 4 Your Service’ by Aaron Dinzeo edited by Sarah Schumaker