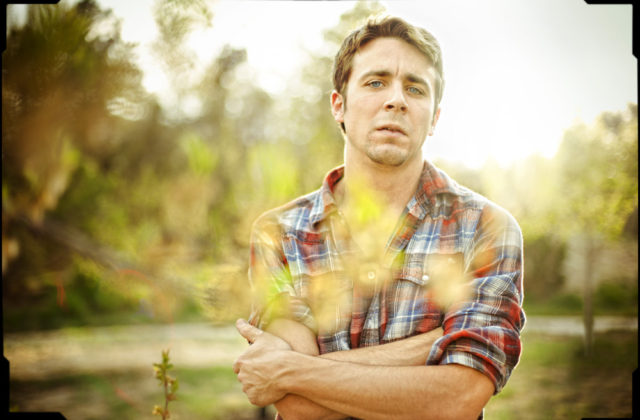 Joe Pug drinks and orders things from Amazon. Some mornings he wakes up to a surprise on the doorstep. His hope is for some stroke of genius. Perhaps this box contains a Dylan record or a hardbound copy of Walt Whitman’s poems.

More likely of late, the new father will find a box with a bunch of signals on the outside suggesting something is living inside the package. In a moment of domestic bliss two nights prior, Pug ordered yeast to make sourdough bread. Rock n’ roll, baby.

He is telling us this story just after noon on a gorgeous Saturday at Anastasia Music Festival. Joe Pug playing the main stage this early in the day is a surprising booking. One of the better songwriters in America graciously jokes about the appropriateness of his time slot. His music is better suited for a dimly lit bar, he quips.

Right now we are gonna go to some strange places.”

Pug is true to his word. The line, “I undressed someone’s daughter, then complained of how she looked,” renders everyone in the front row slack-jawed. The song was written before Pug settled down with his wife and then their baby. He makes reference to the reality of his transition to adulthood more than once. Pug’s catalog was devoid of love songs, so he wrote one. He proudly brought the composition to his wife who described it as, “the darkest song she had ever heard.”

There is a dark quality to the tune but, like most of Pug’s work, it is gorgeous on an awe-inspiring level. More impressive than Pug’s talent is his humility. We were unable to catch up for an interview but he was around for a few moments after his set. What we see on stage is what we experience in person. Dude is gracious and humble. One of our favorite songwriters, who also has an outstanding podcast, is real.

This is the way to kick off a festival Saturday. Anastasia Music Fest would go on to include Jon Stickley Trio’s second mind-blowing set of the weekend, Fruition’s crunchy rock, and Dustbowl Revival’s menagerie of brass, guitar, and various percussion. While there is no clear festival darling this weekend, Joe Pug has to be high in the running for favorite set. Those who got up early enough to catch him are walking away primed for the rest of a promising day. The folks who slept off their hangover arrived kicking themselves for missing the great Joe Pug.