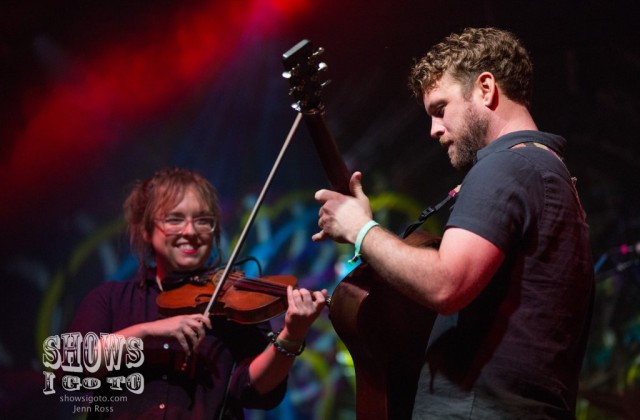 Jon Stickley Trio felt a little apprehension the first time they abandoned vocals in their live show. It was a bold move in the world of bluegrass. Would the purists revolt? Would folks pine for murder ballads and love songs?

The result is unlike anything we have ever heard. It’s bluegrass, but don’t expect Bill Monroe. It is jazz, but it ain’t Grant Green. It’s rock. It’s punk. It’s hip hop. Jon Stickley’s paradigm shift is a paella with just the right amount of each ingredient, resulting in a nourishing dish for body and soul. It’s as if Bela Fleck picked up a guitar and started digesting a ton of Dr. Dre and punk music.

Stickley, Lindsay Pruett, and Patrick Armitage take the Porch Stage around 7:00 Friday night of Springfest 2016. Meanwhile, flatpicking legend Larry Keel is on the Meadow stage, and bluegrass luminaries The Del McCoury Band are warming up to rock the Amphitheatre. It’s a fitting juxtaposition for a young band taking classic sounds and making them something entirely fresh.

Stickley and Pruett dive into the set immediately. No introduction, almost like a jam session brought out of the Spirit of the Suwannee woods and onto its rightful pedestal. Pruett’s revered fiddle harmonizing with Stickley’s guitar. The trio playing in symbiosis; Patrick Armitage’s hard-hitting rhythm behind the drums driving an organic construction of genre-obliterating music.

The music feels like a NyQuil-induced REM-dream. Stickley’s flatpicking moving at Flash-speed, but not strictly for velocity’s sake. These are carefully constructed songs designed to create a mood and movement in the listener. Stickley bounces up and down with excitement at Pruett’s virtuosity, she smiles at Stickley’s excellence.

The light of day begins to retreat. Faint smoke emanates from a machine, thereby adding to the ethereal aesthetic. No lyrics, but a story being told with each tune. This is among our favorite sets at Suwannee, ever. Jon Stickley Trio has a crowd that does not want the music to end. Unfortunately, the schedule has something different in mind. As the trio winds down, “Octopicking” emerges to exemplify the mood-creating properties of Jon Stickley Trio’s music. Pruett’s fiddle willows into a haunting coda. The effort is gorgeous, enrapturing.

Just when she has us swaying, leaning forward like puppets, Pruett smiles her dimply grin and adds a mischievous screech to the piece. It’s a blip, a subconscious reminder that she is of this world. Stickley loves it and mirrors with his own smile. Everyone is having a blast.

As a sendoff, Stickley and Armitage break into a medley beginning with Nirvana’s “Smells Like Teen Spirit,” bleeding into some Allman Brothers as Pruett joins the party, and finishing with a lot of extemporaneous brilliance. Three wildly talented musicians emerging as a potentially revolutionary collective. When the dust of Friday settled and gave way to Saturday, Jon Stickley took time to sit down with Shows I Go To. We discussed creativity, the beauty of music, and what it feels like to perform with such talented musicians.

Jason Earle: From our perspective, the energy, the vibe was incredible during your set on the Porch Stage last night. What was it like from your perspective?

Jon Stickley: It feels good, man. This is day three of the festival for me. Late night jam sessions every night. It gets a little exhausting. But if we can get in front of a lot of people we know we’ve got to do what it takes to give everything we have out there.

We have to kill it. We want this crowd to be fans for life. That’s our goal. I had to dig deep. But, all three of us dug deep to give everything we had. We are just totally in it. I was pretty mind blown and exhausted afterward.

We are really trying to win over as many people as we can. It sounds like that translated.

Another thing is, it’s been about a year since we have been a purely instrumental band. We just decided, with the help of our producer, Dave King, who said, “y’all’s instrumental stuff is so unique.” At first, we wanted to sing more. People want us to sing. But then we thought about it. Suwannee Springfest last year was the first festival set we played all instrumental. That decision forced us to say, “What can we do now to captivate the audience?” That also got us thinking about how we can make this instrumental experience as unique and interesting as possible? That’s how we started throwing in some Nirvana and Doobie Brothers. We’ve been throwing in some teases of other songs so it’s not just nerdy instrumental music all the time.

How does writing purely instrumental tunes affect the creative process versus writing with lyrics? You have told the story about having a dream about one of your heroes, Tony Rice, and then waking up and writing the song “Rice Dream.” Do you have lyrics in mind in that case, and one flows from the other? Or, are you setting out to speak through the music?

That’s another thing we have kind of stumbled upon by writing original music that doesn’t tell a story in words. There may not be words, but the songs do have a unique personality. That song was more of a mood than a narrative. It’s a tribute to a hero of mine, plus a morning vibe. Recently, I’ll write a song without any idea in mind. But then I’ll title a song based on something that was happening in my brain at the time.

There is a recent song I’ve been writing. It’s kind of inspired by angry, political, Canadian punk I was listening to, Propaghandi. I was in a mood of listening to thrash punk. It was right around the time of the terror attacks in Paris. So, I think I was kinda processing that. I titled the song “In plain sight” because I was thinking about how crazy it is a bunch of people like that are out there in plain sight wishing people harm.

That song’s not about terrorism. But it’s an angry sounding song. Mood definitely comes through in your songs. Thinking back to the set, there was a haunting moment near the end.

Epic moments. That song has the transitional aspect of Looouuud, slow.

She’s playing this really intense solo, and then she almost intentionally messes up. Almost to let us know she’s human, with this mischievous grin.

That presentation of that song has evolved a lot through playing it live for people. We’ve realized what makes an impact for people so we have put in more of those moments.

Whenever Lindsay plays, she’s gonna have the crowd.

I loved it because it’s gorgeous, sounds almost otherworldly in the moment, but it has these human moments. She almost snaps you back as a reminder that she’s just a human being up there.

She’s one of the best musicians I’ve ever played with.

What does the creative process look like for Jon Stickley Trio collectively?

I usually present a song idea. Before I was writing fiddle tunes or whatever. Then we took tunes I had written in the past and adapted them to the trio. Now, I’m writing more specifically for the trio. There’s gonna be three elements- rhythm, Lindsay, and myself. That’s actually helped. The songs where we have followed that process have come out really great.

I’ll present a song, make a little demo of it. They’ll kind of internalize it, then we’ll get together. We do one of Lindsay’s songs, “Goa”. Hopefully, we will be doing more of her songs in the future. For the most part now, I come up with the idea, then we flesh it out together.

You mentioned a couple of your musical influences, Tony Rice, dreams, what outside of music inspires you?

The jamming aspect is really important. Any time you come see us play, we are gonna be making music together. It’s not regurgitated from something we have memorized. Everything we do is gonna be slightly different. We are gonna play music together, and improvise together, based around these structures and songs. It’s not performing a piece. It’s us making music together. I think that connects the audience too. You can see that we are changing and adjusting with each other. There is a total element of the unexpected. It’s like, I don’t know exactly what’s gonna happen, but I’m pretty sure it’s gonna be cool.

I wondered about that when watching the live show. You have a lot of moments where you and Lindsay come together, and I wondered how much of that is just feeding off of energy.

Absolutely, we are playing together. I’ll have moments where I’ll try to make her laugh, and she’ll do the same. We’ll have these moments where we run leads together. The reactions you see are real, and I think that is another thing the audience can connect to.

If you had a dream jam session with four players from Springfest, who would be in that number?

Well, Larry (Keel who is playing on the Ampthitheatre Stage behind us during this interview).

Do you get to play with him much?

We opened two of his CD release shows, and had a ball. Total love vibe. He’s one of my heroes. We had Jack Lawrence with us. He was Doc Watson’s right-hand man. And it was Doc Watson’s birthday. So we did all these Doc Watson tunes, three flatpickers. Total good vibes experience.

Pappy from Cabinet. Then, probably Tim Carbone. Actually, those are the people I was jamming with last night. With Larry! So, I’ve already done it.

So you have already had your dream jam session!

Yeah, I guess I have!