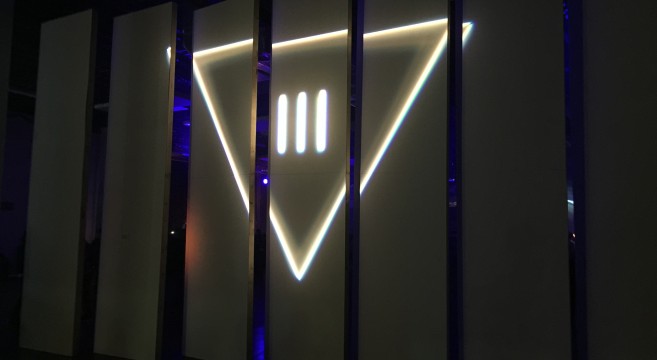 When you hear “Miami” and “three-points” in the same sentence, you seem to immediately think you are about to hear another story about Lebron leaving the Heat. Founders and producers of the III Points Festival intend that you will think of their second annual progressive art, music, and technology festival which was held the weekend of October 10-12, 2014 this year. Think of a more underground South by Southwest meets Art Basel on a much smaller and more intimate scale.

The young festival is hosted in the Wynwood District, a growing arts and culture scene in Miami. The area has been reshaping the downtown Miami core with a cooption of the graffiti art scene by the older, more formal, art industry. The district’s cross-over between street art and gallery art lends itself to what the festival is abstractly based on: A generational deconstruction of outdated institutions to make way for new interactions between aesthetics, entertainment, and contemporary modalities. At night, the festival converged onto the main festival grounds at the sprawling Soho Studios. The main entrance gave off a Swiss Family Robinson-vibe with a III Points branded fort in the middle and vendors on the perimeter in little wooden booths (including more familiar brands like Shake Shack and Pinkberry). The scenery at the entrance turns into a 20s-something Lord of the Flies-lite dystopian nightmare as you passed by a beat up yellow school bus with “FUCK SCHOOL” spray painted on it. This lounge-retrofitted cheese wagon overlooked the Sector3 tent which hosted primarily dance-feels all weekend long. Nearby, the cockpit of an airplane ripped off its fuselage with various pieces of the steel bird littering around gave an eerie salute to something gone wrong. School’s out forever, there is no one flying the plane anymore, and the digital natives have taken over control. The experience at III Points Festival is designed and curated for ‘digital natives‘—Millennials who never had to experience the transition into a digital life. These heaviest users of the internet, social media, and a plethora of electronic devices, have had technology embedded into their daily life from day one…seamlessly, nearly without question.

Four different areas hosted 85 different acts over the course of three nights. Each night had a mixture of local live bands which eventually made way for Miami-based and national DJs who transitioned the stages into the bigger more well known headliners.

Beatsmith and turntablist RJD2 closed out a packed SkateSpace stage which featured a nostalgic, DIY, pop-up skating rink for those brave enough not to bust their drunken asses. Instead of busting asses, New York nu-disco band Hercules and Love Affair got people shaking their asses in the alleyway MindMelt stage which hosted the somewhat rare live acts of the festival.

The non-DJ headliners were awkwardly earlier in the night. This lead to a difficulty in maintaining an audience at the main stage for world renowned DJs like UK’s Duke Dumont and Jamie Jones, Canada’s Jacques Greene and Tiga, and last-second replacement, Spain’s John Talabot. What was billed as a headlining performances turned into what felt like an after-hours party DJ set…but way earlier than any actual after-hours party in any major city. It made for an awkward wrap up of the days events.

Day time activities were spread out at various bars, galleries, and studios across the burgeoning cultural gentrified hub. Workshops, installations, panels, and film viewings explored the concepts and interplay between art, music, and technology. These “Activation” sites were available for those willing to brave the hot daytime South Florida sun or their hangovers from the previous night. Explorations on reality through communal still life drawings at “Insta | Still”, retro-entertainment at the weekend long “Bro-Gaming” exhibition, or different Pre-Points BBQs with The Roots‘ drummer, Questlove, at one, DFA Records‘ party featuring The Juan MacLean at another, or local weirdo and party starter Otto von Schirach hosting a bounce house bash. These events loosely spread the festival out through the earlier parts of the weekend. As the lines between the three points of art, music, and technology continue to blur, breakdowns occur in the structure and compartmentalization of these former isolated and separate concepts that previous generations had worked through; a forthcoming paradigm shift that festival creators build community in which to nurture and support the coming change. The second night featured a packed, sweaty, main stage performance by Australian downtempo crooner Chet Faker tugging those 90s nostalgia strings with a crowd rousing cover of Blackstreet’s “No Diggity.”

Norwegian future R&B producer and bed-squeak sample enthusiast Cashmere Cat held down a set that festival production management couldn’t get to stop; and a close out DJ set by The xx’s Jamie xx finished it all out with a deep, dark, groovy set that ended with an amazing edit of Radiohead’s “Weird Fishes/Arpeggi”.   The biggest surprise came from Saturday’s performance by Kelela at the central hub MainFrame stage. This L.A. bass music meets singer-songwriter has been compared to buzz chick FKA twigs. Her U.K. counterpart doesn’t seem to possess the same vocal and lyrical prowess as Kelela does. The performance was solid from the start even with her DJ being down a CD-J during the set. Adjusting her long braids down throughout her set was a mirroring of her level of comfort as she eased into the large main stage while commanding the stage presence of someone years her senior.

The last night featured a US debut performance from Jamie Jones-headed UK electro-supergroup Hot Natured. They played an outstanding retro-dance music set with multiple live singers switching off on the MainFrame stage.

Even though rain delayed things on the outside MindMelt stage, live musicians rocked the alleyway with local rock and roll band, Jacuzzi Boys, whipping people up into a frenzy before a chiller-vibe offered by Canadian jangle-pop artist Mac DeMarco, who got the crowd heavily involved in his one-man set (including inviting a fan to play drums for a Metallica cover!). A last second switch for hip-hop DJ Kaytranada due to flight delays had his set moved from the main stage to the SkateSpace. A tighter stage was not the best fit for such a hotly anticipated act, but he got the crowd hyped to a level that hadn’t been seen all weekend with rap tracks and remixes blasting in the tiny area. This Montreal newcomer’s set was fresher than anything you would hear at any other club or music festival.

The ethos of the Millennials, the largest current generation, has been described as pragmatic idealism. This translates to realizing their dreams through effective and realistic means and where it comes to exploring art, music, and technology, III Points accomplished this goal. This was evident from festival promoters accepting local and relevant support from food and alcohol brands to music and technology sponsors. Along with the blend of post-modern and experimental music acts, and hosting very straightforward and stripped down exhibitions, there was sufficient evidence to support this notion of pragmatic idealism coming to fruition in the form of a festival. III Points Festival is definitely an event to watch in the years to come as it grows modestly in areas that are growing rapidly; geographically, demographically, and virtually.