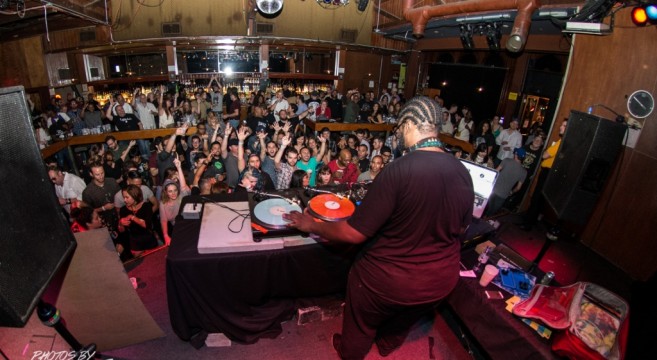 The Tonight show starring Jimmy Fallon made its way to Universal Studios in Orlando, FL last week and brought a ton of cool shit with it. A free secret comedy show at Will’s Pub, Kevin Hart crying on a roller coaster, the Orlando Magic mascot dance-off, and something that excited us the most – The Roots drummer, Questlove, DJing three nights in a row at The Social.

Each night, Shows I Go To had a different photographer and a different writer onsite to document and review Questlove’s three night residency at The Social. It’s no secret that Questlove possesses more than 70,000 records in his vinyl library. He carefully selected the best of the best to accompany him on his unique quest to Orlando to do what he loves, live onstage. Now, please join us on ours: 3 Quests, 1 Love: Six individual perspectives of Questlove’s unforgettable three night residency at The Social in Orlando, FL.

Reviewed by “The Martins” – Photos by Chris Martin, words by Martin Cardenas.

My upstairs Russian neighbor continued his romantic queries while I finished my 16oz Miller High Life. I’m certainly not the kind of guy to be answering relationship advice questions. Thank the gods that flask half-full of Jim Beam in my pocket. Once the can was crushed and the fermented corn was choked down, I left my apartment to make my way to the opening night of Questlove’s three night residency.

Orlando’s public transportation system looks like a Joseph Merrick self-portrait. On the outside it is all sorts of deformed but its intentions are noble to say the least. I got to the Sunrail station around 9:00 pm and learned the last train towards downtown had left around 8:45 pm. I should have done my homework. I decided to walk from Florida Hospital Sunrail stop to The Social. It was about 3 miles and a 45 minute walk. So began my quest.

The walk on Orange Avenue late at night was unexpectedly poetic. The neon lights play off the pristine buildings of downtown and the trek was enjoyable as I trudged through the serene sidewalks.

I ended up at Lizzy’s across from The Social around 10:15 pm. A pint in an air conditioned pub would certainly hit the right note. The doors to the Questlove show had just opened and his opening act, DJ BMF was starting his set.

I went in around 11 and DJ BMF was confidently warming up the quickly growing crowd. BMF’s mix included everything from Michael Jackson to Outkast. I ordered a Jim Beam and coke and went outside to smoke a cigarette. I talked with a few people outside the venue, most notably a kid named Kevin. We got to talking about Questlove’s rise to mainstream notability, everything from his work with the Roots, Common, The Dave Chappelle Show, and Jimmy Fallon.

A surprisingly cornrowed Questlove came out around 11:45, a decent amount of people weren’t sure it was him because like me they were expecting to see his iconic afro. He had some rules:

Questlove has stated in interviews that he possesses the seer’s present of synesthesia, a sensory reaction that evokes the sensation of another. For example, the sounds Questlove hears actually produce visualizations of colors. 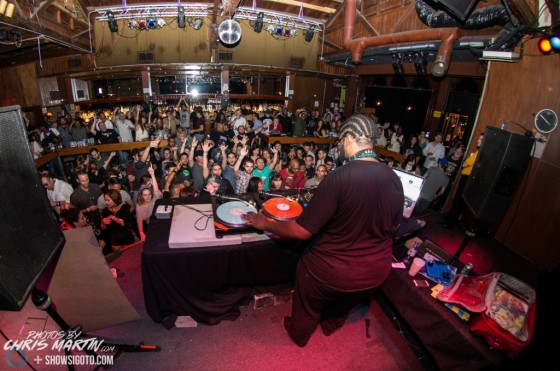 It might have been a combination of the whiskey and weed but 10 minutes into his set I could see some colors too. The red lights in The Social swayed with a steady stream of blues and greens from his superb sound and hypnotic mix.

Only a true musical genius could take his passengers on a drive from Trick Daddy to Alicia Keys and have them arrive at a divine destination.

Questlove’s mojo mix will forever be memorable to me and every maniac in that mad room.

I took in most of the Questlove show from a step, right in the middle of the crowd, perched between the bar and the floor. As dangerous a place it was to be for a show, it’s where I could hear and see the best.

What I got to hear: Michael Jackson songs, all night long, brilliantly and seamlessly pieced together for two or three hours.

What I saw: Questlove as the master of ceremonies, swiftly and ably moving his hands across turntables and a laptop, pausing only long enough to get after those using the flash on their cameras/phones. (For the record, he hates the flash. Really, really hates it.) 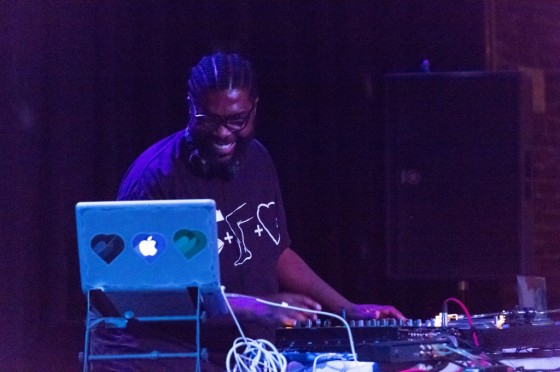 I watched a guy in a Michael Jackson ’80s jacket and Captain EO tee do all the “Thriller” moves he could get away with on a pretty small piece of real estate. Others joined in too, and just like that, it was decided that the famous deejay was someone we came to listen to more than we came to see. I think Questlove was okay with that, maybe used to it, even. I got to dance on a step right near a couple pretty girls doing the same and we got to talk and move and enjoy this whole thing together. (Go ahead, cue those Pharrell lyrics already. We were “happy,” and rightly so.)

Someone argued with me that what I’d seen was not a real concert, that if someone was essentially playing another man’s songs instead of his own, that I should be calling it something else entirely. I disagree, though. Vehemently so.

There was artistry in Questlove’s performance, a certain kind of beauty, even. He’d touched us. This wasn’t about snapping nonstop shots or standing open-mouthed and agape like a crew of zombies.

For many of us, we were hightailing it back towards our younger years, when much of Michael’s music soundtracked our lives. And, yes, it was a concert. A great, memorable one, one that came with even more palpable happiness than we’d ever expected to receive. More bands ought to take note: when you can discover how to connect with your fans and have this kind of an effect, both sides end up winners.

If you’ve ever watched Ahmir “Questlove” Thompson speak about music you quickly realize your passion and knowledge of the same are far inferior. But don’t ever let his calm, collected, and sincere speak of his neverending love for sounds be a discouragement. While we may not be at Questlove’s Yoda-like level, we can damn sure admire and respect his passion and knowledge for a love we all share the same – music. Over the three nights that Questlove performed at The Social, it’s safe to safe that we all grew our musical knowledge-banks through him. We were educated while dancing. And as Vader would say, “The force is strong with this one.”

I’ve been asked the same question several times over the past few weeks. “How did Orlando get so Lucky?” Well, to be honest, it’s Questlove who’s really the lucky one. He has the privilege to perform nightly, doing the things he loves while getting paid to do so (so he can have “date money” to go to the movies and hit up McDonald’s after). Orlando just got to share his good fortune (or quest) with him for a few nights.

“Without the sounds of James Brown, Hip Hop wouldn’t be what it is today.” Questlove wrote in his final instagram post defining the theme of the third night of his residency. DJ Spreadsheets opened the night to a sold out crowd. I was next door covering the Say Anything show for the Orlando Weekly during his set. Spreadsheets is a respected veteran in the Orlando DJ scene and I’m sure he moved the crowd appropriately in anticipation for Questlove.

I was speaking with one of my friends who is a bartender and worked each night of Questlove’s residency. I took a  Fireball shot and he make a clear statement to me “Questlove is the hardest working man in the music business.” I paused and thought. He’s right. Who’s his competition? Dave Grohl? When does this man sleep? Working all day at Universal with Jimmy Fallon and The Roots, then working all night, getting a room full of Orlandoans high on the involuntary movement our bodies were making… You didn’t think have to think about dancing, you just did it.

I made my way near the stage, once Questlove began. I quickly found myself so lost in Questlove’s beats that I almost forgot to watch the man himself! I reluctantly snapped out of my trance for a moment and focused. It became quite clear that Questlove has an innate talent. His two turntables were spinning his carefully selected vinyls and he was quaintly mixing in his own edits and samples, incredibly re-creating beats throughout the songs. Being one of the most influential and respected drummers in the world is quite an accomplishment. Being a highly respected live DJ who actually spins vinyl records in ways that move listeners emotionally and physically is a rarity in our “press play” DJ world. 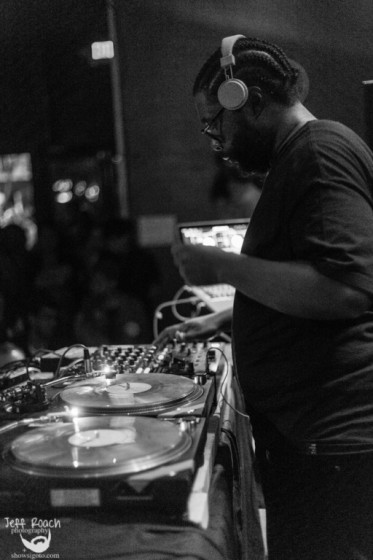 I moved around the room, closing my eyes at times while dancing, trying to make the night last as long as possible. The crowd thinned out towards the end, but they all fucked up if they left. The funnest, most optimistic parts of the set were coming up. “Out of all the shit I played tonight, I bet none of y’all knew this was James Brown.” Questlove joked sarcastically before the room exploded.

He continued with “I have a treat. This next record is the first record that was ever released on Interscope records.” Which was a track off of Gerardo’s Mo’ Ritmo. I danced in a trance and before I knew it, it was surprisingly 2:00 am. Questlove stated “few more records and I’m out. Gotta get some sleep; hope y’all had fun.” Questlove continued to play until about 2:15 am. “Fun” is the most modest of terms to describe the evening. I would say something like “beautiful” or “inspiring” likely with a lewd curse word in front of it. But yes, Q, we did have “fun” to say the least. And thank you for sharing your quest and your love with Orlando.

Huge shoutout to The Lazy Afternoon for making this post possible on a budget and bringing the infamous Questlove to a venue we love!

P.S. Check out Questlove’s new book: Mo’ Meta Blues: The World According to Questlove. It starts out:
“So what’s this gonna be, Ahmir?”
“A Memoir.
“The fuck does that mean?”
“You don’t know what a memoir mean?? A life story, told by the person who lived it.”