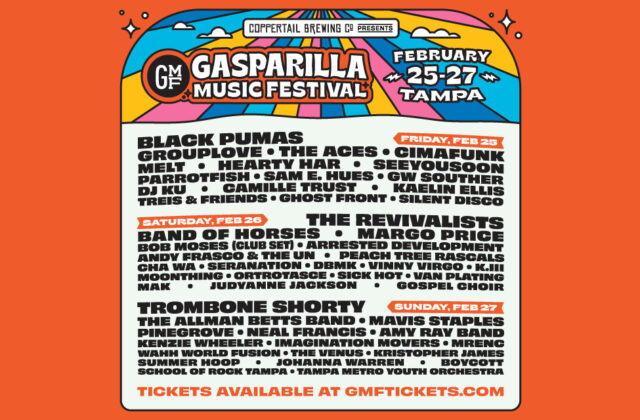 Sailing into Tampa Bay like a big majestic ship, Gasparilla Music Festival returns to the Tampa Riverwalk to fulfill the resolutions of anyone seeking great live music in the new year. Black Pumas, The Revivalists, Band Of Horses, Grouplove, Margo Price, Mavis Staples, and Trombone Shorty are some of the precious cargo ready to light up Curtis Hixon Park February 25-27, 2022. Families and friends alike are invited to enjoy the weekend with plenty of music, food, and refreshments to go around!

Gasparilla is a city festival that has been perfecting balanced music and amazing food since its birth in 2012. This year they are taking it all the way up to 11 for their 11th year! In addition, GMF is a non-profit organization benefiting the musical education of Tampa’s youth by bringing instruments to those in need with a program called Recycled Tunes. Great music and a great cause make it an easy decision to round up the kids and head to Tampa Bay for a weekend of fun!

GET TICKETS HERE
Enter To Win Tickets @ the Bottom! This year’s lineup is chalk full of music to explore and experience for the first time in the beautiful Florida sunshine. Here are a few other acts to consider for your Gasparilla ‘22 voyage!

Saturday we find our roots and water our souls with New Orleans rockers The Revivalists. Lead singer David Shaw and guitarist Zack Feinberg started their band in ‘07 after a chance meeting while Shaw was on a bike ride. Their biggest hit to date ‘15’s, “Wish I Knew You” is still everywhere with 150M+ streams on Spotify.

Rounding out the weekend fans can enjoy jazz from Crescent City’s Trombone Shorty. Troy Andrews is known for playing trombone, but did you know he also plays trumpet, drums, organ, and tuba! He’s been performing since age four and his talents have bled over to the big screen with appearances in NCIS New Orleans, The Simpsons, as well as numerous late night shows.

GROUPLOVE is an indie-pop and alternative rock squad you need to know about. They will most certainly play their biggest electro-pop tunes, “Tongue Tied,” and “Colours!” Be ready to sing your drunken heart out as these guys take you through their intoxicating five albums, topped off by their most recent ‘21 offering: This is This.

Band Of Horses float upon all of the feels radiating from Charleston, South Carolina (by way of Seattle). This premiere folk rock outfit, formed in ‘04, have released five studio albums including the Grammy Award nominated Infinite Arms in ‘10. Their indie rock is sure to make you think about your life while you sway in the Tampa Bay breeze… “I could sleeeeep.”

Cimafunk is a must-see for this weekend to be complete. Erik Iglesias Rodriguez was a medical student living in Pindar del Rio, Cuba before being named by Billboard as a “TOP 10 Latin Artist to watch in ‘19.” Cimafunk made the jump to the US via the South by Southwest Music Festival in ‘19 and haven’t looked back. Tie your shoes on tight for this Afro-Cuban funk dance party!

Margo Price will have you planning your next trip back to Tennessee after her sure to be stunning performance of her tune “Tennessee Song” at GMF ‘22! I love her classic country sound, reminiscent of Loretta Lynn or Tammy Wynette who were wildly popular in the ‘70s. Come fall in love with her the way I have in my few times seein’ her live. She’ll tell you all her secrets as she supports her newest album, That’s How Rumors Get Started.

Chicago singer, songwriter, and keys player Neal Francis stitches together psychedelic R&B with soul and Americana. Formerly of Chicago’s funk band, The Heard, Francis brings that vibe with him as they create musical synergy in his ‘19 album, Changes. His latest offering, In Plain Sight, features a killer solo by guitar phenom Derek Trucks in the song, “Can’t Stop the Rain,” which was written with his friend David Shaw of the Revivalists.

Elected to the Rock ‘n’ Roll Hall of Fame in ‘99 and the Blues Hall of Fame in ‘17 Mavis Staples is a beloved R&B as well as gospel singer. She is also an actress and civil rights activist! This woman (82 years old) will still blow you away with “I’ll Take You There” and “Respect Yourself!”

Pinegrove out of Montclair, NJ represents the space between country and emo. Their alternative/indie rock sound has been a part of the culture since 2010. Putting troubled waters behind them, Pinegrove looks to impress at GMF ‘22 with their new album, 11:11.

I know this festival is overflowing with awesome music but, make time to go see Andy Frasco & the UN, who we interviewed for his huge New Year’s Eve show at Tuffys. And catch some of our local Florida friends — Parrotfish, GW Souther, Kristopher James, Van Plating, seeyousoon, MrENC, and more on the full GMF2022 lineup below.

Tickets are on sale right now! Grab your weekend or daily passes, or treat yourself with their very reasonable VIP (which gets you shade, as well as your own bar and closer viewing area! Woo hoo!) I can’t wait for GMF ‘22!!

We’ve teamed up with Live Nation FL to bring you some Free THREE-DAY GA tickets to GASPARILLA MUSIC FESTIAL in Tampa on February 25-27, 2022!