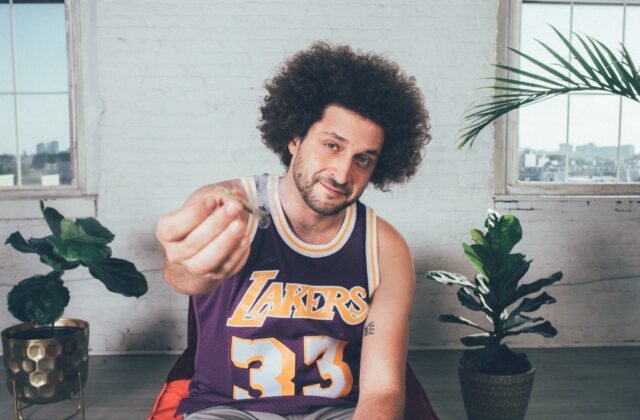 Andy Frasco & The UN are blazing into 2022 at Tuffy’s Music Box in Sanford. This will be Andy Frasco’s first NYE party he’s playing in the United States in 8+ years! (He’s been playing in Hong Kong, China on NYE for several years in a row!). Now is your chance to experience Andy Frasco & The UN at the beautiful Music Box located on the Tuffy’s Cider complex in Sanford, FL (TICKETS HERE!) Chuck Magid, SIGT: So, you are playing at Tuffy’s Music Box in Sanford, FL for New Year’s Eve this year. I know that you have played NYE in Hong Kong for the last eight years. How did you get linked up with that gig, and how did you land in Sanford, FL this year?

Andy Frasco: Yeah! We’ve been playing Hong Kong for a while. This is the first time we’ve ever really played New Year’s Eve in America. We literally played in every U.S. city this last three month tour and Sanford is the only city we haven’t played yet.

SIGT: So how did you initially get hooked up with that Hong Kong gig?

Andy Frasco: For the Hong Kong gig, We did a battle of the bands and we lost. We came in third place. It was like, a really pretentious, jazz-and-Blues-type of festival. And then we lost. But the owners of the hotel, Venetian Hotel, were like, “These guys are good. We’re going to keep you on.” And then every year, they just started booking us for New Years, and we didn’t have to compete for a battle of the bands. And we were making dough. And it was fun. We got to open for KC and the Sunshine Band, Justin Bieber, David Beckham, it was a trip. And now that Covid-19 had hit, they’re just going to keep all the entertainment local to China. So we finally have the opportunity to play in America for New Years.

SIGT: That’s awesome. Well, I know they’re stoked over there at Tuffy’s to have you. For people that haven’t seen your live show, what should they expect from Andy Frasco & the U.N. on New Year’s Eve?

Andy Frasco: It’s like organized chaos. We’re just trying to get people out of their heads, especially with this Covid and the pandemic. It put a toll on everyone. And if we could at least get people out of their head celebrating life again… We’re like an energetic, enthusiastic band that wants to celebrate life. Hopefully, our show can bring optimism for 2022 to anyone who shows up to the show. We want these people to be happy, forget about the struggles of life because life is really fucking hard at times. And to just get out there and let loose and try to have as much fun as you can.

“We want these people to be happy, forget about the struggles of life because life is really fucking hard at times.

SIGT: For someone that has seen your show before, why should they come out to see you on New Year’s Eve? What is going to be different compared to other shows?

Andy Frasco: We’ve been on the road for three and a half months. It’s like, the best we’ve ever sounded. We have new music. We’re doing new stuff. And, like, New Year’s Eve, it’s like we’re going to go extra hard in the paint because I don’t want people to fly out and then give them a lax performance that’s tired and beat up. We have two weeks off and we’re going to be rolling into New Year’s Eve’s show with fresh ears, not burnt out, and ready to give ’em hell!

SIGT: You were talking about the organized chaos with your live performance. It’s one of the most energetic concert experiences that I’ve ever seen. And I’ve seen a ton of concerts. Are you guys busting out any special stops or any special songs or have any special guests lined up for this New Year’s show?

Andy Frasco: Yeah! A lot of my friends are in town, actually. So, I don’t want to ruin the surprise. We got a lot of cool sit-ins. We like to theme our special events with some cool stuff. We have a couple of new covers we’re working on, but we’re also about to announce the new record in the beginning of the year. So we’re going to test out a lot of the new songs from the record at our New Year’s Eve show, which no one has heard. So it’s going to be a unique experience. The songs might sound like shit because we never played them or they might kick ass. You never know with new songs. But we’re going to try. And like I said, New Year’s is such a special experience, and people pay high dollar to go to a New Year’s Eve show and I’m going to try not to let them down.

SIGT: Are you guys playing one set, two sets, or how will the show be structured?

Andy Frasco: Like, a two hour set. And then we have an opener, Yam Yam, and these guys are crazy good musicians. So, we’re going to do a super-jam thing at the end of the night and just really go full throttle on the jams. It’s going to be crazy because those guys are so good. Ten musicians on stage. It’s going to get crazy chaotic and be a party. I have a feeling it’s going to get fucking rowdy.

We’re going to do a super-jam thing at the end of the night and just really go full throttle on the jams. It’s going to be crazy because those guys are so good. Ten musicians on stage.

SIGT: I feel like your band is a jambalaya of different influences from all your musicians. How does that work? You have some multi-instrumentalists and are all running around switching instruments, doing some crazy things musically. How does that work for you and your band and what you’re trying to deliver as a performer?

Andy Frasco: We’re just trying to get better every day at other instruments, and we’re trying to get better as songwriters. We’re trying to get better as a band, and better at listening. With the whole switching to instrument thing. It really takes you out of autopilot because you really have to focus because the instruments are second hand instruments. The guys are really good at it. I’m like a really good 8th grader at the bass, or like a really good high school drummer. It’s just like anything in life, like when you’re working in a collaboration, it’s like you got to really listen to each other. And that’s my goal is just to stay present, and doing stuff like getting the crowd to pick me up in a crowd surf or doing the hora or like having the band switch instruments just makes the show that night more unique and more authentic to the present moment.

SIGT: I can’t wait to head out to Tuffy’s Music Box on NYE and witness it for myself. Thank you Andy and see you at the show! (TICKETS HERE). (FACEBOOK EVENT HERE).

We’ve teamed up with Tuffy’s to bring you some Free GA tickets to Andy Frasco & The UN at Tuffy’s Music Box in Sanford on December 31, 2021!