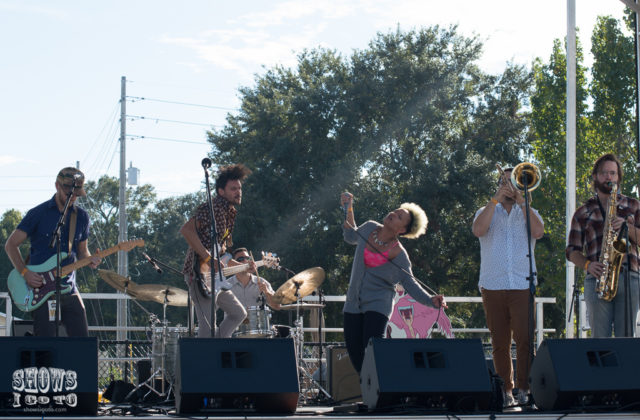 The man at the marble bar lifts head from his plate of sushi and meets my question with trepidation.

Thank God. The only thing worse than being a groupie, is being a fake groupie.

The man eating salmon sashimi is none other than Alfred Ruiz of Orlando’s own, The Sh-Booms. I quickly explain myself as not a crazed fan, (although, fan is not wrong,) but rather, a newly minted admirer of the band. Wariness disappears from his brow a little as I animate how I was in attendance of their last show at Will’s Pub with the Jacuzzi Boys (shouts out to FL music!) and was blown away. Brenda’s voice alone could pin a person to the back wall with one note but add in the horns, a dash of zesty, charismatic live stage banter and you’ve got the best show in town.

There was very little doubt I was approaching the wrong person as Ruiz’s curly hair and quirky style are unmistakable. He’s confident in our first conversation; humble and comfortable. Within minutes, its clear his onstage alter ego comes not from a faux bravado but an authentic appetite for real soul music the likes of Aretha Franklin and Clarence Reid. It’s also not hard to get along with someone who notes ‘WHISKEY’ as a musical influence on their band page and truly, the old saucy gal is a personal life hero of mine as well. (Put that on my tombstone please.)  My next encounter with the soulman would be in quite the different atmosphere and I decide I’ve harassed Al enough and let him enjoy the rest of his raw fish in peace. I stride onto the Orlando Festival Park grounds and the place is already buzzing with bodies. Beer tents line the sides of the field but for once, I bypass the brews with something better on my mind; The Sh-Booms set has just started. I b-line to the stage and get comfy with my camera. The area in front of the band is mostly empty grass but begins to fill up once the patrons get a taste for what ‘Mizz Bren’ is pouring, (better than the beer, I think). Her voice fills the sprawling space with ease and grace. That’s not to say there isn’t plenty of sass coming from the tiny songstress as well. She embodies the presence of greats from a bygone era. (Let’s just say one late and wonderful Miss Sharon Jones would give her approval in a heartbeat.) The entire ensemble is a throwback to the big band sound of the ’40s and the sweet soul of the ’60s/’70s. Rare are the times where you get such conviction matched by an equal amount of showmanship and funk.

Some of the members of The Sh-Booms break down their origins and favorite beers for me after their set in a rare spot of shade.

Sarah Schumaker(Shows I Go To): So, how did this music project start being that there’s seven of you, that’s a lot to take on.

Al “The Thump” Ruiz: Davis and I built this thing in a garage together, day 1 and then through a series of events we met Miss Brenda and we’re here.

SS: Here exactly would be the Orlando Beer Festival. So, appropriate question to ask, what is your favorite type of beer?

Al: Depends on the mood.

Al: Get fucked up. So, probably something high alcohol content. There’s no booze so we’re drinking IPA’s.

Mizz Bren – Supreme Queen: I was doing the coffee stouts, expresso and stuff but IPA all day.

SS: Ok, very cool, very cool. Now, tell me where do your musical influences come from?

Al: A multitude of influences. Brenda comes from a crazy electronic world. Davis and I are stuck in the 1960’s and ’70s. A lot of garage punk, soul, psych and we force it down Brenda’s throat and she accepts it..

Al: I think that’s what makes us unique. You don’t hear a lot of bands, like, we’re a rock’n’roll band with a crazy fucking singer in front of us. A soul singer. It’s cool, a lot of people are turning their head to it.

SS: Yea! You guys(Brenda and Al) have such an amazing chemistry…

Al: Yea, we hate each other.

MB: Yea, day one it was pretty instantaneous…

Davis: She didn’t know she wanted to be in a band until she was in a band.

*Brenda tilts her head back in laughter*

SS: All that charisma! What were you doing before?

Well, um, I was a solo artist. I had a deal with a popstar who shall not be named, so when I did that it was like, ok, I want to be in a band. I needed a band. I didn’t want to be stuck in the studio anymore and I didn’t get the chance to perform out and I realized that was the piece that was missing. I had all this studio experience and then when I met these guys I was like, oh, crap, this is what it’s really about. I kind of black out when I perform. I don’t mean like blackout drunk. I mean like really in the moment, in the music and shit. I think that’s what connects people. People have been saying we’re authentic.”

SS: That’s exactly the word I think of! When I first saw you, I thought, wow, this band really knows their sound and…

Al: No we don’t. But that’s the great part. We think we know something and then my favorite thing is when we play with punk bands and garage bands like everything is an influence.

Al: We’re playing it on 11/23 with Fat Night and The Woolly Bushmen. Those are our buds, so, we’re super hyped on that.

SS: How does it feel to be apart of the Orlando music scene?

Al: We love our friends. I love Will Walker.

MB: We love Will so much.

SS: What does the beginning of a Sh-Booms song sound like? Where do you start?

Al: I build a skeleton and they put the body on it.

MB: He lays down the foundation and then we make it the thing and it’s really organic and then we’re like, okay, this works!

Al: No one really writes anyone’s parts. I just start with something and then I’m like, hey, let’s do this and then everyone’s like well, that sucks but how about this!

MB: It’s all about interpretation, all about how we interpret his idea and then it grows from there.

SS: Next project in the works? Anything close on the horizon?

Davis: We’re in the studio recording. We’re recording with Simon from The Woolly Bushmen, recording tape and analog.

Al: Something new for all of us.

Davis: We’re probably halfway through or more. So, that’s really the exciting thing is the next record.

Al: We’ve picked up management and we signed a licensing deal for film and television, pretty exciting.

GET TIX To THE SH-BOOMS in ORLANDO HERE!

RSVP To THE SH-BOOMS in ORLANDO HERE!

The Sh-Booms have collaborated with Redlight Redlight on a brown saison beer brewed with Brazil nuts, ginger honey, and coffee beans, called “Night of The Dirty Bird” which will be released the night of the show! GET TIX To THE SH-BOOMS in ORLANDO HERE!

RSVP To THE SH-BOOMS in ORLANDO HERE!

Here’s some photos I took from The Sh-Booms at the Orlando Beer Festival. 🙂

The Sh-Booms Interview 2016 and photos by Sarah Schumaker.