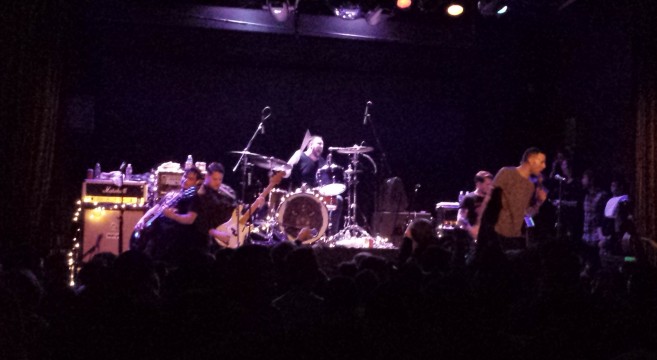 I Am The Avalanche at Bowery Ballroom? Holy Fuck. Things have changed. 😉 “This is the biggest venue we’ve headlined.” Spilled frontman, Vinnie Caruana. There were a lot of emotions charging the final IATA performance of 2014. It was their founding guitarist, Brandon Swanson’s, last show. It was to be the “last show they play for a while while Vin focuses on writing new Avalanche songs throughout the winter” (super stoked about this part). And, this was promised to be “the most epic set list they’ve ever performed.” Here’s a shitty pic: 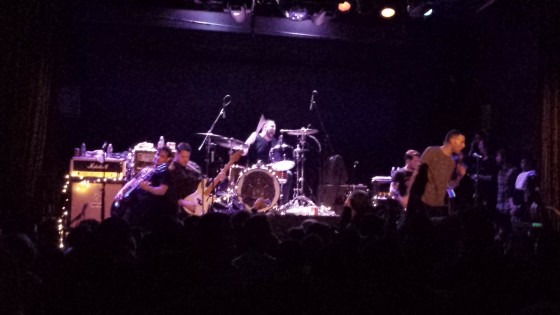 I walked into The Bowery Ballroom off the cold New York City streets (yes, 45 degrees is fucking cold for a Florida dude). I went down the stairs, which seemed to be the only direction I could go, and found myself in a lounge-type of room with a bar and bathrooms, surrounded by wall-mounted speakers, blaring the band currently on stage, Iron Chic.

I peed, slapped a Shows I Go To sticker on the urinal, washed my hands, and did some confused circles around the room, trying to find the stage. I finally caved, tucked my tail between my legs, and asked the door girl for direction. “Hi, can you please tell me where the stage is?” I asked with a dumb smile on my face. “It’s upstairs.” She replied. “You can either go that way or that way.” (Yes, I’m felt like a dumbhead.)

I thanked her and made my way upstairs to the beautiful ballroom where Iron Chic were half-way through their set (bummed I missed The Scandals). The sound was right. Those beers from McSorley’s Old Ale House were kicking in. The night was perfect so far and I Am The Avalanche were about to take the stage in their home state. I was stoked.

I’m not sure if it was sweat, the spills from alcohol, or the alcohol sweats from the endless crowd surfers, but the floor was super fucking sticky. I was surprised that I didn’t see any security preventing crowd surfers from becoming stage divers. And they became such, perpetually. (That shit wouldn’t fly in Orlando.)

There’s something interesting about the way Caruana says the word “fuck” and it’s variations. It’s like he pulls it from a place within himself that many cannot tap. Every “fuck” is fully charged with enough emotions to move mountains. Their second song was “Holy Fuck” and they were at 110%, reciprocating their energy with the dripping audience.

I Am The Avalanche performed songs from their first, self-titled, album that they “hadn’t played in over a year.” They played all the ones we love the most on Avalanche United and Wolverines. The continued to push harder and harder throughout their set and so did we. Afterall, this was all our last chance this year.

IATA surprised us by inviting founding members, Michael Ireland and Kellen Robson, out to play guitar and bass guitar respectively on the most fitting of songs, “Gratitude.” Maybe it was that break they took before ending the song to take shots of Jameson out of the bottle. Maybe it was the epic buildup of high sentiments leading up to that moment. Maybe it was the strong sense of family in the room. But, more than anything, those howling lyrics from “Amsterdam” never rang truer and served as a concrete theme of the evening:

“This is our last song, it’s a cover.” Announced Caruana. “Just kidding, you guys know what fucking song this is. This is the last IATA song of 2014! Get the fuck up!” They tore into “Brooklyn Dodgers” and I sang every word, filling my role as a member of the IATA choir made up of every sweaty soul in Bowery that night. It was a perfect ending to a perfect set (setlist here). And Caruana’s final move was a dive off the stage into the open arms of his family.

“That was fucking awesome.” Seemed to echo from everyone’s lips as AC/DC’s “Highway To Hell” played loud over the house speakers once the lights were brought up. I wasn’t sure where I was going next, but I knew I was satisfied. I knew I tasted a little piece of New York history that night. Thank you Vinnie, Brandon, John, Corey, Brett, Michael, and Kellen. Cheers to Avalanche re-United in 2015.

I Am The Avalanche Live Review by Mitch Foster.