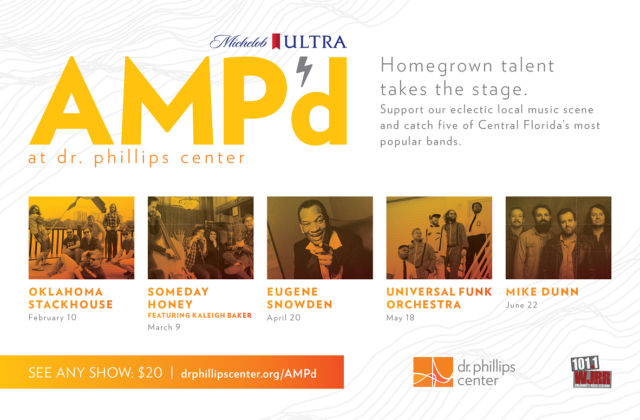 Dr. Phillips Center for the Performing Arts, WJRR, and Shows I Go To are teaming up to bring the local music to the masses! The AMP’d series at the Dr. Phillips Center features rising stars in the Central Florida music community. Each show will be recorded and will be made available to the fans at a later time. So come on down and enjoy an ice cold Michelob Ultra while listening to the best live music Central Florida has to offer. Tickets are only $20 for each show.

Purchase Tickets Here!
Use Promo Code /// SIGT
To Save $5 At Checkout

Valet and prefered parking available for purchase before the show. Established in 2011, Oklahoma Stackhouse is an Orlando, FL based band blurring the lines between blues, reggae, rock, ska, jazz, and funk. They have two studio albums on record now and plan to release a new one in 2020. No matter your age or taste in music, OK Stackhouse has something for you!

Formed in 2018 in St. Pete, Someday Honey with Kaleigh Baker is simply delightful. A staple at Hideaway Cafe in St. Pete, this group has created their own “wonky tonk” genre. Emotionally harmonic synthesis of rhythm and blues, rock, and soul based in good old fashioned americana.

The thunderous singer, frontman and songwriter of soul/funk band The Legendary JC’s! A drummer, percussionist, and singer from a musical family, Eugene taught himself guitar, wrote new songs and hopes to attain mellifluous absolution. He will be joined by some of Orlando’s best on stage.

A collection of musicians from all walks of life, Universal Funk Orchestra draws power from its diversity. From the beats by Dizzlephunk, to the bars of LaRue, UFO brings the funk to the people. UFO won a spot in Okeechobee Music Festival 2020 at Destination Okeechobee hosted by SIGT at Celine.

Mike Dunn and company are Americana music at its finest. Eyeing Tom Petty and Bruce Springsteen as heavy influences, Mike Dunn brings edge to the pop fans and sensibility to the punk scene. Safe to say that this band knows how to throw a party!

Purchase Tickets Here!
Use Promo Code /// SIGT
To Save $5 At Checkout