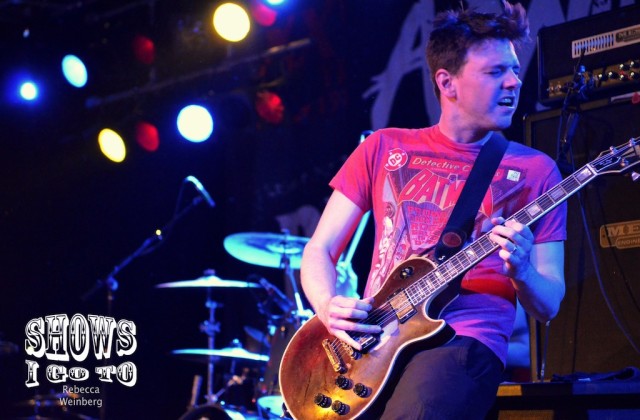 A Wilhelm Scream, as far as melodic punk goes are the best in the business. They have built a reputation through their face melting, passionately energetic live shows as well as their critically acclaimed albums. Tyler had the pleasure of interviewing one of their founding members, the guitar shredder Trevor Reilly. He discusses their upcoming #WinterIsCummingTour, some of his favorite shows, and what 2016 has in store for AWS.
Tyler: Trevor, first thanks so much for your time. We appreciate it. Here at Shows I Go To we love experiences one can have at a show. As far as passion and energy are concerned, A Wilhelm Scream is in a league of its own. I’ve witnessed you guys win over crowds that may not be very familiar with your music by your live performances. Is there a routine you guys do before a show to harness all that energy?

Trevor: Wow, thanks for saying that. We just have alot of fun, man. We don’t really have any group pre show routines except–I warm up with that space hog song with all the high oohs in it because it makes the other guys laugh and sing along and I like that. Our drummer Nick does a very extensive warm up routine for like an hour before gig time, Mike and Brian stretch their fingers, Nuno drinks hot tea, but generally we all just  grip it and rip it, hope for the best. We do bask in our imperfections, and no band has more fun than we do on stage playing together, so I’m glad it translates. Tyler: AWS is one of the hardest working bands out there. You guys are constantly touring and are doing things on your own terms, I respect that. Your band has always had a lot of integrity in a business that doesn’t always have it. Was there a person or artist that influenced how you handle the business side of music, or was it simply your upbringing?
Trevor: Jon Teves, our founding bassist, was always the business guy in the band in our early days, really before there was any real business to be taken care of, but I think it was really his work ethic that had the biggest effect on us, myself for sure. Play every show, take every tour, stay on the road. That’s what our favorite bands did.  And where we come from is very blue collar. You pay your dues, work hard, be kind and good things will happen. But yeah, Jon was always the responsible one, made sure our bills got paid before we paid ourselves, that type of thing. I sort of took over his role when he left the band all those years ago and I always just tried to do what I think Jon would do in regards to decision making. I definitely said no to some deals a few times that I am very glad I said no to on behalf of the band.

“Play every show, take every tour, stay on the road–you pay your dues, work hard, be kind and good things will happen.”

Tyler: The #WinterIsCummingTour starts December 11th in your home state Massachusetts. We are going to catch you in Brooklyn. The tour is primarily in Canada, and the tour features a band PEARS who have created a big splash for only being a band since 2014. What are you looking forward to on this tour?
Trevor: Pears is awesome and along with Brutal Youth anda bunch of other killer friends I’m looking forward to some really rowdy, energetic fuckin’ shows! This is a sick lineup, we are stoked to have these bands with us. A night of thrashy frenetic punk, every night? Sign me up. Also, Tim Horton’s is delicious, I am looking forward to that every day too.
Tyler: You primarily do most of the songwriting. I know your hometown of New Bedford, MA influences you. Are there any songwriters or writers that influence you as far as style goes?
Trevor: Blake Schwarzenbach is my favorite lyricist. He keeps you enganged, and eventually drops the heaviest, fucking most beautiful line on you that makes the whole world make sense, makes your heart drop into your stomach, makes you want exhale and shake your head and say “holy fuck.” Devastating writer. David Mamet, William Blake, Thoreau, Paul Westerberg. These guys all inspire me to write.
Tyler: Going back to shows, what are some artists/bands that you have seen live that are your favorites and have had an influence on you?
Trevor: Hot Water Music was a huge influence on us growing up. Those shows back in the day, where the crowd and the band together made the show such a transcendent experience. The mid to late 90’s with that first wave of post punk emo or whatever. Great time in indie music. Propagandhi, they make amazing records that they perform flawlessly live. They can do no wrong in my book. One of the most awesome live bands I have ever seen though? Fucking Sick Of it All. They fuckin’ kill it live. They were probably the last band that really knocked me out. Converge too. Insane!
Tyler: Are there any AWS shows/tours that stand out to you throughout your career as favorites?
Trevor: There’s so many it’s hard to narrow them down, we’ve been lucky. Japan in 2005 was mindblowing, opening for Strike Anywhere–this was our first time overseas. First time to Russia I wept in the bathroom after the show, I was very overwhelmed with the emotion of it all. Moscow was nuts, such a fun show.  Brazil, this last trip to Mexico. The first time to Europe when Lagwagon took us out was amazing. And Rise Against shortly after that. We learned so much from those bands and on those tours about longevity, and that we belonged. Learned alot about ourselves playing live in front of new audiences, and the confidence that comes with that, coming into our own as performers and as people. Tyler: We are getting ready to unveil our favorite albums of 2015 on Shows I Go To. What have been some of your favorite releases this year?
Trevor: A few great ones that come to mind are War on Women, After the Fall, Nada Surf Live because it has Concrete Bed on it and that song is perfect, and the first Pears album, which I think was re-released this year but deserves a mention because it is fantastic, and their new one coming out next year is even better. So since I got a chance to hear that one, this year, because my friends worked on it–it rips. Oh yeah, and the new Title Fight, really dig that one, its got this cool shoe gaze style that I am all about and last but not lease the self-titled album from Red City Radio.
Tyler: Finally, what does 2016 have in store for AWS?
Trevor: Early next year my wife and I will have moved in to our new place in which we will be building our new recording studio in, Anchor End. So we will be very busy getting that together, while writing songs for a new record, which we kind of already got a head start on. We also got some songs left to finish, left off of our last record “Partycrasher” that I am excited about finishing, so those will come first, for a 7″. We also have plans on hitting the road in the Spring and keeping the pain train a rollin’.
Tyler: Thanks again Trevor for your time and for being one of the most sincere bands in the scene. We appreciate it.
Trevor: Thank you so much Tyler!

A Wilhelm Scream’s latest release, “Partycrasher” was released in 2013 via No Idea Records.

Check out A Wilhelm Scream with Pears at Saint Vitus in Brooklyn, NY this Sunday, December 13th! We’ll most definitely be there!