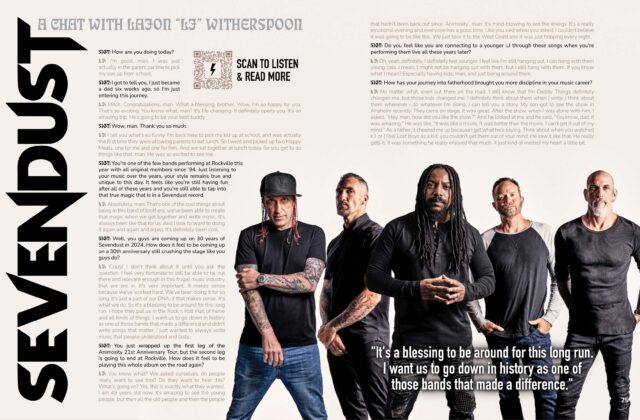 A chat with Lajon “LJ” Witherspoon, lead singer of Sevendust.

Originally featured in the 2022 Welcome To Rockville Official Commemorative Guide. SIGT: How are you doing today?

LJ: I’m good, man. I was just actually in the parent car line to pick my son up from school.

SIGT: I got to tell you, I just became a dad six weeks ago, so I’m just entering this journey.

LJ: Oh, my goodness. Mitch, Congratulations, man. What a blessing, brother. Wow, I’m so happy for you. That’s so exciting. You know what, man? It’s life changing. It definitely opens you. It’s an amazing trip. He’s going to be your best buddy.

SIGT: Wow, man. Thank you so much.

LJ: I tell you what’s so funny. I’m back here to pick my kid up at school, and I was actually the first time they were allowing parents to eat lunch. So I went and picked up two Happy Meals, one for me and one for him. And we sat together at lunch today. So you get to do things like that, man. He was so excited to see me.

SIGT: You’re one of the few bands performing at Rockville this year with all original members since ‘94. Just listening to your music over the years, your style remains true and unique to this day. It feels like you’re still having fun after all of these years and you’re still able to tap into that true magic that is in a Sevendust record.

LJ: Absolutely, man. That’s one of the things that’s cool about being in this band of brothers that we’ve been able to create that magic when we get together and write music. It’s always been like that for us. And I look forward to doing it again and again and again. It’s definitely been cool.

SIGT: Well, you guys are coming up on 30 years of Sevendust in 2024. How does it feel to be coming up on a 30th anniversary still crushing the stage like you guys do?

LJ: Crazy! I don’t think about it until you ask the question. I feel very fortunate to still be able to be out there and relevant enough in this frugal music industry that we are in. It’s very important. It makes sense because we’ve worked hard. We’ve been doing it for so long. It’s just a part of our DNA, if that makes sense. It’s what we do. So it’s a blessing to be around for this long run. I hope they put us in the Rock n Roll Hall of Fame and all kinds of things. And we go down in history as one of those bands that made a difference and didn’t write songs that didn’t matter. I just wanted to always write music that people understood and lasts.

SIGT: Well, you just wrapped up the first leg of the Animosity 21st Anniversary Tour, but the second leg is going to end at Rockville. How does it feel to be playing this whole album on the road again?

LJ: You know what? We asked ourselves, do people really want to see this? Do they want to hear this? What’s going on? Yes, this is exactly what they wanted. I am 49 years old now. It’s amazing to see the young people, but then all the old people and then the people that hadn’t been back out since ‘Animosity’, man, it’s mind-blowing to see the energy. It’s a really emotional evening and everyone has a good time. Like you said when you asked, I couldn’t believe it was going to be like this. We just took it to the West Coast and it was just hopping every night.

SIGT: Do you feel like you are connecting to a younger LJ through these songs when you’re performing them live all these years later?

SIGT: How has your journey into fatherhood brought you more discipline in your music career?

LJ: No matter what, even out there on the road, I still know that I’m Daddy. I know that I’m a husband to my wife. Things definitely changed me, those kids changed me, the first born. Me and Ashley have two together, so it’s an amazing transition. I definitely think about them when I write. I think about them whenever I do whatever I’m doing. I can tell you a story. My son got to see the show in Anaheim. They came on stage. It was great. So when I was alone with him, I said, “hey, man, how did you like the show?” And he looked at me and he said, “you know, dad, it was amazing.” He was like, “it was like a movie. It was better than the movie. I can’t get it out of my mind.” As a father, it cheered me up because I get what he’s saying. Think about when you watched ET as a kid or Lost Boys, any of those things, you couldn’t get them out of your mind. He saw it like that. He really gets it was something that he really enjoyed that much. It just kind of melted my heart a little bit.

SIGT: I can’t think of a person more important to compliment you. Is there anything else you would like to say to the fans at Rockville or the Rockvillians this year?

LJ: I just can’t wait to see everybody. I love Rockville. I can’t wait to be in Daytona Beach. I love you guys. Lets just have a good time!