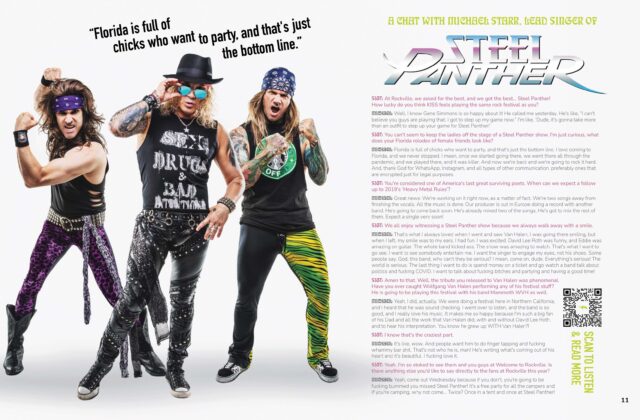 A chat with Michael Starr, lead singer of Steel Panther.

Originally featured in the 2022 Welcome To Rockville Official Commemorative Guide. SIGT: At Rockville, we asked for the best, and we got the best… Steel Panther! How lucky do you think KISS feels playing the same rock festival as you?

Michael: Well, I know Gene Simmons is so happy about it. He called me yesterday. He’s like, “I can’t believe you guys are playing that. I got to step up my game now.” I’m like, Dude, it’s gonna take more than an outfit to step up your game for Steel Panther!

SIGT: How does it feel to be banned from Disney World’s House of Blues?

Michael: I’ll never forget that very epic night. I didn’t really realize that we got banned until we never got booked again. I remember calling our agent, I said, hey, how come we’re not playing House of Blues in Orlando? And he said, because a girl showed her v*****, and you guys let it happen! And I told him, can you please let the guy know we had nothing to do with that? We’re just playing songs to get people sexually aroused, and if they get naked, there’s nothing we can do about it! I mean, that’s not the only girl that got naked, but there were several girls that were taking their tops off, and then that girl did that. I was like, oh, my God… And I may have said “Show your v*****,” sure, but I was joking.

SIGT: They can’t help it, man. What can you say? You can try. You can try to ask them to follow all these Heavy Metal Rules that you’re setting. But when the music takes over them, there’s a power to it, and the clothes just shed off.

Michael: Yeah, I think Steel Panther has that sexual power musically. All our lyrics are sexually driven, too. So I think it goes in your brain subliminally and girls go there to party, and they want to have a good time. And a lot of them like to get on stage and have a good time and show the crowd they’re having a good time in various ways. Unfortunately, showing your vagina at a Disney property probably doesn’t go along with the whole Frozen brand or Tangled brand, so it’s fine. There are plenty of venues to play other than the House of Blues.

SIGT: Your music is definitely full of sexual energy. It admittedly caused me to question my sexuality, more than once. You can’t seem to keep the ladies off the stage of a Steel Panther show. I’m just curious, what does your Florida rolodex of female friends look like?

Michael: Florida is full of chicks who want to party, and that’s just the bottom line. I love coming to Florida, and we never stopped. I mean, once we started going there, we went there all through the pandemic, and we played there, and it was killer. And now we’re back and we’re going to rock it hard. And, thank God for WhatsApp, Instagram, and all types of other communication, preferably ones that are encrypted just for legal purposes.

SIGT: Well, we’re stoked to have you back. How do you even keep that rolodex organized? Is it by area codes, like Ludicrous would? Or are you just doing states?

SIGT: You’re considered one of America’s last great surviving poets. You truly know how to write exactly what we’re all thinking in current times. Like, for example, the platinum single “Fuck 2020,” released when we all really needed it the most.

Michael: Well, I have to be honest with you. All the lyrics are collectively written by the band and the guy with the sickest mind, his name is Satchel. Yes, he comes up with the base of everything. Physically, he’s a genius, in my opinion. And lyrically, he’s a genius, too. I’ll be on the beach and he’ll call me and say, “Hey, man, I wrote a song.” I’m like, “All right, send me the lyrics.” He’ll send them to me, and I read them. And I’m like, “Holy crap, where am I going to sing these?” He goes “On stage, bro!”

Michael: We’re working on it right now, as a matter of fact. Great news: We’re two songs away from finishing the vocals. All the music is done. Our producer is out in Europe doing a record with another band. He’s going to come back soon. He’s already mixed two of the songs. He’s got to mix the rest of them. And, man, once they’re mixed, then we can set up the roll out for it. I don’t have a date yet, because I’ll tell you one thing, we sell a lot of vinyl records. And vinyl is backed up really bad. So we’re looking for alternative ways to get it made, and hopefully we can release it all at the same time. But you can expect a single very soon. We’re going to tour the fucking hell out of that record.

SIGT: Hell yeah. Do you have a title in the works or has that not been decided yet?

Michael: As far as, like, the album art and title. Usually what we do is once it’s mixed and we have a song order, that’s when we start riffing on titles for our record. We also have a vault filled with titles of records. An ongoing joke on tour is whenever we hear something that’s funny or clever, we’re like, fucking album title right there! We put it in our vault and it’s on Satchel’s phone, and he just keeps storing them over and over again. Then we just go through them and sometimes we’ll piece them together like one idea, another idea, and we’ll combine them and make one title out of it. So I don’t know, man. We’re thinking about maybe having the fans submit some ideas for album titles because that’s always fun.

SIGT: That’s awesome. We can try to compete with the lyrical genius there, but we’re no match for Satchel’s vault.

Michael: Some people say, God, this band, why can’t they be serious? When are they going to come out and play a serious song or whatever the case may be? And the fact is, what you’re hearing is who we are, and that’s what we keep doing because that’s who we are, man. We joke around on the bus all the time and we come up with ideas. I think that’s one of the things that draws people to Steel Panther because it’s real, it’s organic. We’re not like four actors or comedians trying to come up with things that people think will be funny. If it makes us laugh, then we will do it.

SIGT: That energy is conveyed directly to the fans, like myself, and I think that’s why we all enjoy witnessing a Steel Panther show, because we always walk away with a smile. It’s always a good night for us. You’re uplifting so many people that have been in so much shit for the last few years and just on behalf of me and my friends that I know who are fans. Thank you.

Michael: You’re welcome, man. That’s what I always loved. When I went and saw Van Halen, I was going there smiling, but when I left, my smile was to my ears. Yeah, I had fun. I was excited. David Lee Roth was funny, and he was amazing on guitar. The whole band kicked ass. The show was amazing to watch. And that’s what I want to go see. I want to see somebody entertain me. I want the singer to engage my eyes, not his shoes. It’s time to rock.

SIGT: I feel like that’s a very small point in your life that you get kind of stuck in sometimes.

Michael: Yeah, man. I mean, come on, dude. Everything’s serious! The world is serious. The last thing I want to do is spend money on a ticket and go watch a band talk about politics and fucking COVID. I want to talk about fucking bitches and partying and having a good time!

SIGT: Amen to that. Well, the tribute you released to Van Halen on that topic was phenomenal. Have you ever caught Wolfgang WVH performing any of his festival stuff? He’s going to be at this festival as well.

Michael: Yeah, I did, actually. I got to hear a sound check. We were doing a festival here in Northern California, and I heard that he was sound checking. I’m like, oh, my God, he’s sound checking. Because we were playing and the stages were so far apart that there would be no way for me to see him. And the time is slanted. But I went over to listen to the sound check, and the band is so good, and I really love his music. It makes me so happy because I’m such a big fan of his Dad and all the work that Van Halen did, with and without David Lee Roth, and to hear his interpretation. You know he grew up WITH Van Halen!

Michael: It’s like, wow. And people want him to do finger tapping and fucking whammy bar shit. That’s not who he is, man. He’s writing what’s coming out of his heart and it’s beautiful. I fucking love it.

Michael: Yeah, come on Wednesday because if you don’t, you’re going to be fucking bummed you missed Steel Panther! It’s a free party for all the campers and if you’re camping, why not come… Twice? Once in a tent and once at Steel Panther!