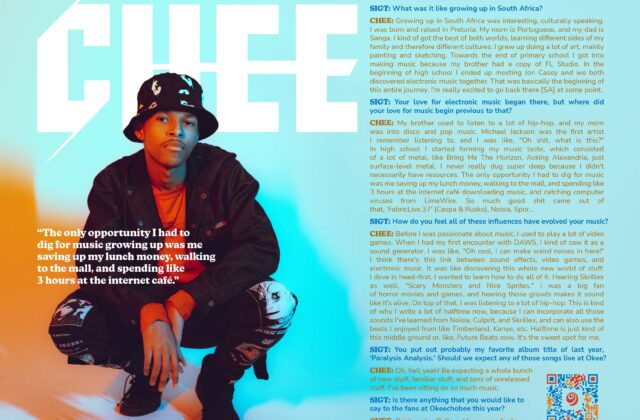 SIGT: What was it like growing up in South Africa?

CHEE: Growing up in South Africa, it was interesting, culturally speaking. I was born and raised in Pretoria. My mom is Portuguese and my dad is Tsonga. I kind of got the best of both worlds and learning different sides of my family and therefore learning different cultures. It was a very interesting upbringing. I grew up doing a lot of art, mainly painting and sketching. Towards the end of primary school I got into making music because my brother had a copy of FL Studio and I was like, “oh, that looks sick!” In the beginning of high school I ended up meeting Jon Casey and we both discovered electronic music together. That was basically the beginning of this entire journey. I’m really excited to go back there at some point.

CHEE: My brother used to listen to a lot of hip-hop and my mom was definitely into disco and pop music. Michael Jackson was the first artist I remember listening to and I was like, “oh shit, what is this?” I used to dance when I was a kid and seeing Michael Jackson do like the moonwalk, I was just like, “what the fuck is he doing?! He’s gliding on water.” That was the music around me. In high school I started kind of forming my music taste, which consisted of a lot of metal, like Bring Me The Horizon, Asking Alexandria, just surface-level metal. I never really dug super deep because I didn’t necessarily have resources. A lot of the music was just stuff that I had heard from my friends because we didn’t really have the internet. I would just go to school and hear people bumping this music. The only opportunity I had to dig for music was me saving up my lunch money, walking to the mall, and spending like 3 hours at the internet café downloading music, and catching computer viruses from LimeWire. So much good shit came out of that, ‘FabricLive.37’ (Caspa & Rusko), Noisia, Spor…

SIGT: How do you feel all of these influences have evolved your music?

CHEE: Before I was passionate about music, I used to play a lot of video games. When I had my first encounter with DAWS, I kind of saw it as a sound generator. I was like, “oh cool, I can make weird noises in here.” I think there’s this link between sound effects, video games, and electronic music. That got me drawn into electronic music because there weren’t really any lyrics. It was just sounds on sounds, like shit you would have never thought to be put in a composition. It was like discovering this whole new world of stuff. I dove in head-first. I wanted to learn how to do all of it. Hearing Skrillex as well, “Scary Monsters and Nice Sprites.” I was a big fan of horror movies and horror games, and hearing those growls just sounds like it’s alive. On top of that, I was listening to a lot of hip-hop. This is kind of why I write a lot of halftime now, because I can incorporate all those sounds I’ve learned from Noisia, Culprate, and Skrillex, and also use the beat I enjoyed from like Timberland, Kanye, etc. Halftime is just kind of this middle ground or, like, Future Beats now. It’s the sweet spot for me.

SIGT: I love that you have that wide variety of musical influences, and they translate into your music. You’re always doing stuff to help the music community. The sample packs that you put out on Bandcamp are insane. Has anyone sent you mixes using various samples you’ve created that blew my mind?

CHEE: Oh, yeah, tons of people, man. Even some of my friends and my peers will send me a track, and then they’ll just be like, “Yom I just ripped the fuck out of his sample pack.” Like, Thomas (Tsuruda), and also Sander (Eprom) who did a VIP of a Shades track, and he was like, “Spot the CHEE sample.” The fact that people I look up to are using it, it’s an indescribable feeling. For the longest time, my favorite thing was showing people new things, just as much as I was shown all this new music I didn’t even know existed. The fact that I was able to find that world of things, I want to do the same with the community by showing them this whole world. Even on my Instagram (@wtfischee) sometimes I’ll just have random videos of me showing people how to use certain plugins or downloading random DAWS. I really love doing that more than anything, honestly. I think the electronic music community in general is just always sharing things with each other and it’s beautiful.

SIGT: It truly is.

CHEE: That’s the only way we can really transcend and move forward, if we do it as a unit. I feel like anything that has ever been made in the world that was “sick as fuck,” had to take a team of people who are passionate about it.

SIGT: Would you have any advice for somebody who is looking to get their career started?

CHEE: Don’t put too much time into worrying about what gear you have or how your studio is. Just work with what you have. And even just samples alone is fine, just experiment. If you don’t have any idea what you’re doing, referencing is important because you want to understand how this stuff works. What better way to understand than to listen to the artist you love and study what they do. The more you do that, the more you have a grasp of how things work. Just try looking at how a lot of artists started. It’s all about what you have, it’s how you use what you have. Communicate with other producers, go on Discord servers or find forums, like Dogs On Acid, where everyone is sharing the same passions. You can do so much with so little.

SIGT: You put out probably my favorite album title of last year, ‘Paralysis Analysis.’ Should we expect any of those songs live at Okee?

CHEE: Oh hell yeah. Be expecting a whole bunch of new stuff, familiar stuff, and tons of unreleased stuff. I’ve been sitting on so much music.

SIGT: I’m stoked for you, man. I’m stoked for the future. I’m especially stoked about you performing at Okee on the Aquachobee stage, which is right by the water. It’s going to be beautiful. Is there anything that you would like to say to the fans at Okeechobee this year?

CHEE: Drink water. Pull up. Have some fun.