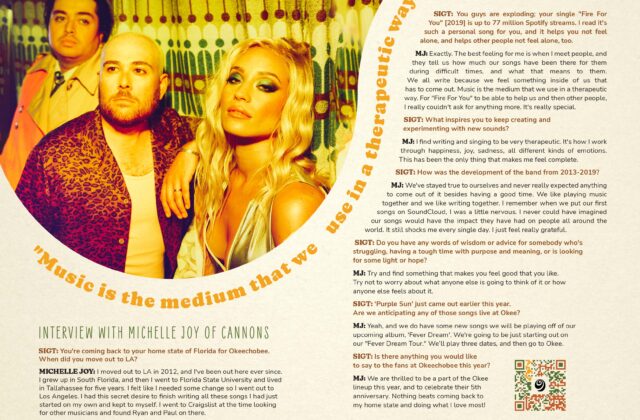 Interview with Michelle Joy of Cannons:

SIGT: You’re coming back to your home state of Florida to experience some Okeechobee. When did you move out to LA?

Michelle Joy: I moved out to LA in 2012, and I’ve been out here ever since. I grew up in South Florida, and then I went to Florida State University and I lived in Tallahassee for five years. I felt like I needed some change so I went out to Los Angeles. I had this secret desire to finish writing all these songs I had just started on my own and kept to myself. I went to Craigslist at the time looking for other musicians and found Ryan and Paul on there.

SIGT: That’s amazing. When did you first realize that you had this magic in a voice?

MJ: I’ve always loved singing and writing songs since I was super young. I would take my dad’s cassette tapes and just record over them with little songs. In College, I took a guitar class, but I didn’t realize I had to sing as well for of the assignments towards the end of the class. I covered a song and I got such good feedback so I was like, “Maybe I can sing?”

SIGT: You guys are exploding everywhere. It’s incredible. Your single “Fire for You” is up to 77 million Spotify streams. It’s such a personal song for you and it helps you not feel alone and helps other people not feel alone.

MJ: Exactly. The best feeling for me is when I meet people or Cannons fans and they tell us how much our songs have been there for them during difficult times and what that means to them. It’s really special because we all write because we feel something inside of us that has to come out, or there’s something that we’re working through. Music is the medium that we use in a therapeutic way. For “Fire For You” to be able to help us and then other people, I really couldn’t ask for anything more. It’s really special.

“Music is the medium that we use in a therapeutic way.”

SIGT: There’s such an undeniable healing power to music, especially live music. You’ve had so many sync placements on recent TV shows. How have these placements helped propel your career?

MJ: The placements have been pretty incredible. Especially with “Fire for You,” we wrote that in 2019 and it had already been out for a year before Never Have I Ever picked it up for their show. Once that episode aired, we were number one on Shazam. I’m just really grateful for that sync especially. But all of them have been so helpful and such a blessing.

SIGT: What a blur. How crazy was it waking up that day and then waking up the next day going, was that a dream?

MJ: It was so surreal. It took a long time for it to sink in. Right after that almost every single label was in our email inbox. We ended up signing with Columbia, which has been so awesome and we couldn’t ask to be working with a better team in the world right now. I feel grateful for this opportunity to be able to expand the Cannons universe.

SIGT: It’s important to have a safe, comfortable place to call home. And it’s really nice to hear that you guys are happy where you are. Let’s talk about Okeechobee.

MJ: I can’t wait to experience it. It’ll feel good to be back home, too. There’s a different feeling when I go back to Florida and play than anywhere else just because it’s home. I’m excited.

SIGT: What inspires you to keep creating and experimenting and trying new sounds?

MJ: I find writing and singing to be very therapeutic. It’s how I work through happiness, joy, sadness, all different kinds of emotions. This has been the only thing that makes me feel complete.

SIGT: It charges you. It gives you purpose. It makes you feel alive. I think that’s something all of us ultimately seek is fulfillment, as humans. From 2013 to 2019, how was the development of the band?

MJ: We continuously write music that makes us feel good. We’ve stayed true to ourselves and never really expected anything to come out of it besides having a good time. We like playing music together and we like writing together. I remember when we put our first songs on SoundCloud, I was a little nervous. I could have never imagined our songs would have the impact they have had on people all around the world. It still shocks me every single day. I just feel really grateful.

SIGT: So many people connect to these words that you write and the feelings that you convey through your music. They must feel the same way as you, which means you’re not very different from the people who are connecting with you. It’s so tough for many of us to find our ways out of depression and out of loneliness and sadness. Do you have any words of wisdom or any advice for somebody who’s struggling, having a tough time with purpose and meaning, or is looking for some light and some hope?

MJ: Try and find something that makes you feel good that you like. Try not to worry about what anyone else is going to think of it or how anyone else feels about it.

SIGT: It is so difficult to put into words the things that we all feel. When someone like yourself is able to do that through music, it moves us. It shakes us inside.

MJ: Yeah. That’s another thing, too. I did turn to music because right before I met the guys and had all these songs that I wanted to write, I was going through a really difficult time with two terminally ill parents. I just had all these feelings and emotions that I didn’t know what to do with or where to place them. I also didn’t have anyone to talk to at the time that I felt truly understood me. So I did use music as a way to express those feelings in a more cryptic way. But from the messages that I get from fans, they’re sometimes in exact situations I’ve been in, and hear certain things in my voice they can really connect to. It’s just really special.

SIGT: I’m a big believer that we are all connected in some universal way. I am you. You are me. And we are the trees, the birds, and the bees. We’re all experiencing whatever this is together. It’s so important when essentially we break that fourth wall and we talk to one another. Do you have any advice for young women who are looking to express themselves through music and art?

MJ: I would suggest to just learn how to just write and record yourself a little bit. When I reached out to other musicians to work with and found Ryan and Paul, we were actually able to write a song without meeting in person, which is kind of awesome. I could send them my vocal stems and stuff and try things out. I just feel like it is a lot easier with the Internet to be able to test the waters in different areas and write with different people to find your place. For me, it’s really important to be able to record myself and flesh my ideas out a bit before I go into a writing session with anyone else.

SIGT: ‘Purple Sun’ just came out earlier this year. Are we anticipating any of those songs live at Okee?

SIGT: Is there anything you would like to say to the fans at Okeechobee this year?