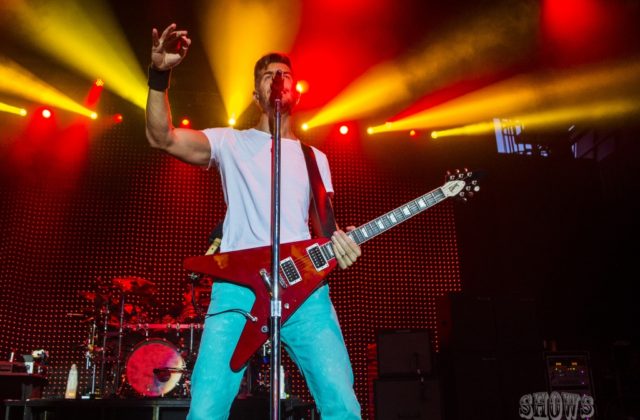 There are three Florida dates on this tour: Boca Raton, St. Augustine, & Jacksonville. I’m able to catch the Wednesday show at the St. Augustine Amphitheatre. My old-school friend, Courtney, and I endure a two hour drive from Orlando which puts us through a pretty intense rain & thunderstorm on the midway-stretch along I-4 and I-95. We survive the treacherous conditions and arrive safely, right on time.

We walk inside the venue just as Passafire hits the stage. They only play for half an hour, so I bounce and head bang while I can, making excellent progress on that big ass beer as well. That being said, I don’t remember their setlist at all, but I’m pretty sure they played “Dimming Sky” and probably “Kilo.” Kilo’s my jam. Hell, it’s THE jam. From the slow smooth steppin’ bass lines to the fast blastin’ guitar licks, its the perfect reggae rock groove metal song with cool positive lyrics to top it all off.

Check out this clip of Passafire, thanks to The Sober Goat’s Instagram.

Passafire is Ted Bowne (Guitar/Lead Vox), Will Kubley (Bass/Vox), Mike DeGuzman (Keys), and Nick Kubley (Drums). They hail from hometown Savannah, GA and are on the Easy Star Records label. After this tour with 311, they embark on the FireWerks Tour with psychedelic dance jam funk rockers The Werks. Passafire recently released their sixth full-length album, Longshot, on May 12, 2017. The album is a testament to inspiration, life experiences, following dreams, and the people, places, and journeys of it all, which Passafire has a lot to say about since becoming a band.

My fellow SIGT photographer for this show is James Strassberger (see Instagram above). I had seen his name for months and finally we got to meet. In the group pic below, James is on the far right and yours truly is centered, and sweaty. New Politics is up next. I’ve never heard of them before this show was announced, and I did minimal research on my drive from Orlando, giving two tracks just a quick listen. Let’s just say I was a bit perplexed and put back on what I was listening to before (Spafford). Anyway, New Politics come on stage and the singer is decked out in all white. Interesting. This band is very much pop punk, with a dash of hip-hop, and well, I’m not the least bit interested. Therefore, I hang out in the back lawn area for the entire set. They sound solid, I’ll give ’em that. It was just a bit out of place if you ask me. This was the general consensus with most of the fans I conversated with. Was this a joke? If so, I don’t get it. At least the singer busted out some sick breakdancing moves.

A very different sound from what you’d expect at a 311 show, but still shook it like Harlem.”

Early in the set around the third and fourth song, New Politics play two covers, “Seven Nation Army” by White Stripes and a Rage Against The Machine song (probably “Killing in the Name”), I can’t remember exactly (damn those big ass beers and the aroma in the air).

Finally, the time had come for some 311. I’ll admit, when I listen to 311 at home or at the office or in the car or wherever (in the shower), I tend to stick to the first five albums in heavy rotation, but I’m very familiar with their whole catalogue. I’m an oldie fan, which is why I don’t initially or fully recognize at least a quarter of the songs on this setlist. Although in my defense, most of said songs were from the new album, Mosiac, their 12th studio album released on June 23rd. The one song from the set that got me asking someone next to me “What song is this?” was “Too Late.” I naturally couldn’t contain my dance moves, which is a sure sign of appreciation.

The show is not all wild and crazy ruckus. I always enjoy the somber but inspiring “Beyond the Grey Sky” which Nix Hexum always asks the fans to light it up for those we’ve lost. The electric glow of cell phones and the energetic flicker of lighters fills the amphitheatre. Check out this live Periscope stream of “Beyond the Grey Sky” thanks to The Sober Goat.

But after the tributes and calming down, things always get kicked backed up. Check out this clip of “Livin’ & Rockin'” thanks to The Sober Goat’s Instagram.

Another damn good show in the books (somewhere in the mid to high 30’s numbers for me if I had to guess). 311 has perfected their signature sound and always deliver an energizing performance for both the old school fans as well as the newly excitable ones.

STAY POSITIVE AND LOVE YOUR LIFE!

Check out the full 311 setlist below.